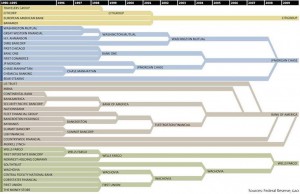 Whoa.  Kind of puts it all in perspective.

We talked about how the NYC subway map distorts the proportions and cardinal orientation of Manhattan to serve the needs of the map — laying out all of the info on the page, fitting the whole system on the map, graphical clarity.  But a subway is just a line with points — from the viewpoint of the subway rider you just need to know how many stops until you transfer to the green line, then which direction to take (binary decision) and then how many stops until you get off.  You don’t need to know that the F train makes a 90° turn after W. 4th, just that 2nd Avenue stop is two stations later.  When leaving the subway you do need a planar map for negotiating the grid, but in the tunnels a line will do.

So if that is the case, why make the subway map resemble its geographical reality at all?  Why not let it become something else, something symbolic or representative of structures and organizing principles unburdened by physical reality?…
END_OF_DOCUMENT_TOKEN_TO_BE_REPLACED

Visual maps of languages are fascinating to me, since they chart so many other things — cultures, ethnic groups, historical events (invasions, immigrations and emigrations, royal marriages and other forced mergers) and more.  This one is great because it maps it to words for geographical features; I’m amazed at how well it clusters!  It also reminds me of how confused I was when I first moved to the northeast at the preponderance of “-kills” in the Hudson River Valley (Peekskill, Catskill, Fishkill — lots of animals being killed…) until someone explained it to me. 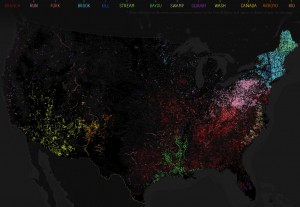 This map charts the rich variety of waterflow toponyms in the US, which reflects the climatological and geographical diversity of the country, but also its linguistic and historical heritage. River names seem extremely resistant to change, and indeed often are echoes of earlier dominant cultures [1].

The colours on the map, which is based on the place names in the USGS National Hydrography Dataset, correspond to the generic toponyms for waterflows, excluding the two commonest ones (river and creek, rendered in gray).

via 531 – A Rio Runs Through It: Naming the American Stream | Strange Maps | Big Think.

I definitely recommend clicking through and reading the whole post, which includes more explanation of each color and word (and word origin.)

This is terribly silly, but also an excellent example of a way of mapping a passage of text, with external factors (the “memetic significance” of various passages, i.e. “How much did was that particular section mocked in the internet/YouTube/pop cultural arena?”) taken into account and given visual expression. 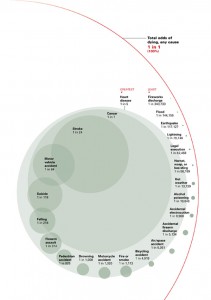