While watching rehearsal Thursday I started sketching arrows–arrows that light up with chasing light bulbs and call lots of attention to themselves; arrows that point in various directions; arrows that can be manipulated by characters; and… well, that don’t actually carry meaning.  Lots of flash and very little actual help for lost souls looking for their way.  I have been thinking of them as “fallible flags,” a concept Tom Garrity expounded upon during his talk “TRUTH = MATH = BEAUTY” last Tuesday for the Williamsthinking video series.  Interesting concept: You’re doing your research and you happen upon something that SEEMS so significant that it must mean something–and yet, it doesn’t.  Not every arrow you happen upon, actually points you in a meaningful direction.

We’re talking about using roving lighting booms that will be scenic elements and also practical lighting fixtures; perhaps they have arrows attached.  Perhaps they have large colored light bulbs on top (like a ghost light) that can make the rovers function like pins on a map as they roll about the stage space.  Perhaps there are arrows that can be used as hand props.  Perhaps there are arrows that fly in from above or roll on from the wings, as in… “YOU ARE HERE!” (Arrow points straight down at stage floor.)

Sketches, and pics of a full scale model: 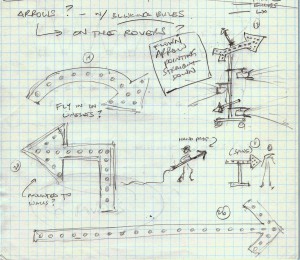 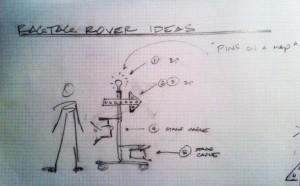 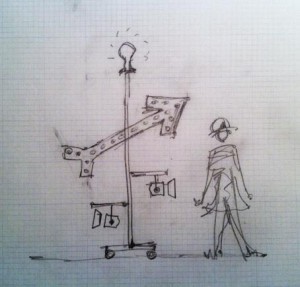 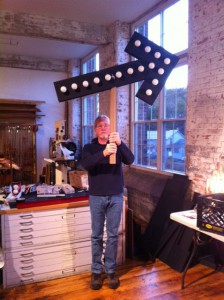 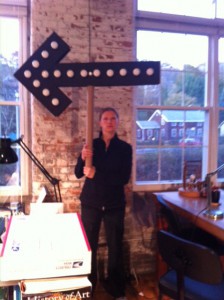 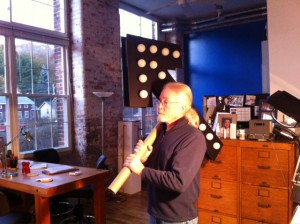 Imagine the prototype is a fun color other than flat black, and that the light bulbs are illuminated and able to chase and blink.

Grocery:
Apple enters SR. She is so hungry – clutching her stomach, grumbling. She crosses toward SL, the grocery store, counting her coins in her hand. Something catches her eye at DSR – a shiny new bugle! She crosses over and looks at it, mimes greeting the sales clerk who tells her the price – she counts her coins and looks sad. Crosses back to SL, gazes in the grocery window at the baked goods, licks her lips, counts her coins – now torn between the two options, counts and recounts, glances back and forth – she suddenly decides, marches over and places her coins down for the bugle! Takes the bugle and the hat to DCS – sits on the ground and excitedly plays. She mimes waving and hamming it up for passerby – then notices some of the passerby have put coins in the hat! She grabs the hat coins and bugle and runs to the grocery store. Hurray!

Apple, Lars, Danny, Bee notice Geek is sleeping behind an umbrella. Danny initiates the group huddling together and inching closer and closer to Geek, who notices and also scoots away from them periodically. Geek eventually stands and runs off stage. The group now decides to play the precious object game to rile their audience. The bottle of jack serves this purpose. They crowd around it shielding it from view – they realize Bee is the shortest so they rotate 90 degrees so Lars obstructs the view, they take turns “drinking” and snickering. The babies’ heads pop up over their shoulders periodically on the look out. We randomly decide to split up because the object isn’t important and we want to keep the audience’s interest – we all abruptly dash off stage through different entrances and meet in the crossover. Lars proposes a song is sung. Apple proposes “Somewhere” from West Side Story. Danny, Lars and Apple loudly and horribly sing, but only the first two lines. They trade props. Lars and Danny hold babies now which serve as funeral flowers. Where is Bee? Maybe it is her funeral. They process on stage behind Apple who holds the horn behind her back and honks it periodically. They reach center stage. Apple tells them to put their flowers down – they do, the groups sobs. Apple suggests they say a few words. Lars says “pineapple.” Silence and sobbing. Apple: “So, IHop?”. The group agrees and exits together SL.

General
Stephen Simalchik has joined the company as an actor; we added him into rehearsal for the first time today, and everyone was happy to have him there.  Everyone performed an epic version of the story of the past six weeks.  Then the Davids revealed a beautiful circus poster, crafted by David Morris, to the class, after which everyone went off to write scenes for their characters.

Props
1. ADD: Six umbrellas that open at the push of a button on the handle.  They cannot be black.  The button need not also cause the umbrellas to close.

Rehearsal in the AMT

General
We had a great rehearsal after a few days off.  The ensemble collaborated to create a new piece, and spent some time writing about the characters they have been working with thus far.  Attached you will find the schedule for the upcoming week. 10/31-11/6 Schedule

Here are a few open-ended questions to consider about the point we stopped at in yesterday’s rehearsal – they’ve been on my mind and I didn’t want to forget them! Look forward to discussion tonight.

Are mapmakers played by members of the troupe?

Are they aware of each other- seeing and acknowledging each other, etc

What chronological planes do the stories unfold on?  As in, if the troupe ‘s story is “live” and sharing the same space and understanding of Time as the audience members, how does the mapmaker story fit into that?

Who then has agency over the performance?  I expressed that if the mapmakers “control” the troupe and create their story then it feels insular from the audience for me, as it is predetermined, self fulfilling its own narrative.  If the troupe arrives with the intent to perform, and carry out their performance with awareness of the audience, the theater space, etc, is the audience to accept the mapmakers as occurring on a separate theatrical plane from the troupe?  What does this mean for their interactions?

General
The ensemble spent the first half of rehearsal working on individual pieces before reconvening to weave the individual pieces together.  I will publish the script containing today’s work to the website as soon as everyone’s text is sent to me and I have time to compile it.  We will pick up tomorrow fleshing out the Map Maker story.

Rehearsal in the Directing Studio

Here’s something by Kurt Vonnegut:

Just some more food for thought.