The radioactive properties of 99mTc, such as its short half life, low toxicity, and emission energy make it an ideal element for radioimaging.99mTc radioimaging could be a promising diagonstic tool for diseases such as Alzheimer’s, that require a non-invasive method of diagnosis. By complexing 99mTc with targeting ligands, the compound can be made specific for Alzheimer’s disease, and hopefully lead to a radiodiagnostic tool.

Radiodiagnostics are a powerful way to noninvasively look inside a patient’s body. They rely on imaging agents that contain a radioactive nuclide, such as 18F (in fluorodeoxyglucose, which is used for positron emission tomography (PET) scans), or 99mTc, used in SPECT imaging. The radiolabeled imaging agent localizes to a specific part of the body, where it emits radiation that can be measured by an external instrument. Typically, radiopharmaceuticals used for imaging emit either gamma rays or positrons (while radiopharmaceuticals used for therapy emit particles such as α or β– particles) (Alberto).

There are two main types of radioimaging: PET (positron emission tomography) and SPECT (single photon emission computed tomography). PET reads the emission of positrons, while SPECT reads the emission of gamma rays. PET scans are higher in resolution and sensitivity. SPECT, on the other hand, relies on longer-lived radioisotopes and has lower direct costs. SPECT imaging has a variety of uses: numerous cardiac, bone, lung, kidney, liver, and gall bladder SPECT scans are performed every year. Both PET and SPECT can be combined with CT scans to give more precise positional information (Jaffer). 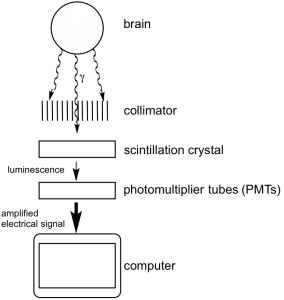 Figure 1. Diagram of SPECT imaging of the brain

SPECT works by converting gamma rays into electrical signals that can be read by a computer. The basic components of the instrument (shown in Figure 1) are as follows: gamma rays exit the body and encounter a collimator, usually made of lead, which improves the resolution of the imaging. The lead blocks the progress of rays traveling at an oblique angle, while small holes let through rays traveling in the correct direction. The rays then interact with scintillation crystals, such as NaI, which luminesce when excited by gamma rays. The luminescence then hits the photomultiplier tubes (PMTs), which amplify the signal and convert it to an electrical charge, which is sent to the computer. This process is performed from many angles around the body, allowing the computer to create a 3D reconstruction.

Some important considerations for choosing an appropriate radionuclide for imaging include radiation emission energy, half life, and stability of the daughter nuclide. The radiation must penetrate the body so that it can be measured by an external instrument, and the ideal range is between 100keV and 200 keV. Furthermore, the ideal radionuclide has a short enough short half-life. However, the half-life has to be long enough so that the radiopharmaceutical can be synthesized, injected into the patient, and used for imaging (a process lasting about the duration of an afternoon). Upon decay, the radionuclide must have a stable daughter nuclide so that there is no further radiation exposure for the patient (Alberto).

99mTc, a metastable isotope of technetium, is a good fit for radioimaging. 99mTc decays to 99Tc, releasing gamma photons (Equation 1) with an energy of 140 keV and a half-life of six hours. Furthermore, the daughter nuclide 99Tc is very stable, with a half-life of 212,000 years, and has low toxicity (Bartholoma).

In addition, 99mTc is readily available through a generator system: immobile 99Mo loaded onto an aluminum oxide column will decay to 99mTc through β– and γ emission (Figure 2). The daughter nuclide has a lower affinity for the column and can be continuously eluted in the form of [99mTcO4]– while 99Mo remains bound to the column. The generator system makes 99mTc readily available and cost effective (Bartholoma). 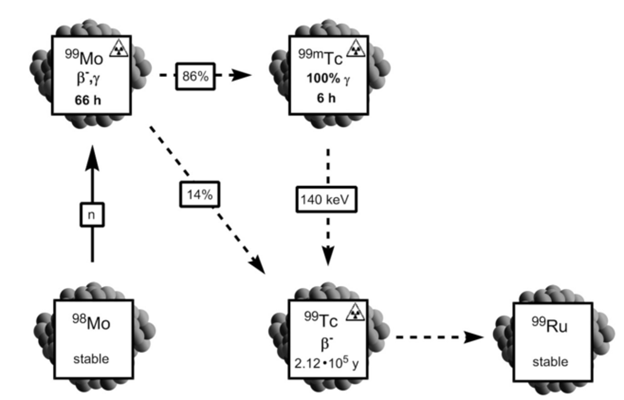 The oxidation states have different coordination geometries: Tc(I) complexes are octahedral; Tc(III) often has distorted octahedral complexes but can expand its coordination number to seven; and Tc(V) complexes are often square pyramidal. Most Tc(V) compounds contain either the [Tc=O]3+ or [Tc≡N]2+ core, since O2- and N3- are π-donors and stabilize its high oxidation state. As a π-donor ligand, O2- exerts a strong trans influence, weakening the strength of the trans bond such that most complexes containing the[Tc=O]3+ core have a coordination number of five with a square pyramidal geometry (Alberto).

Alzheimer’s disease (AD) is a serious neurodegenerative disease, and it is the most prevalent form of dementia, affecting more than five million Americans. However, it is very hard to diagnose definitively, and currently, the only way to definitively diagnose AD is post mortem. Radioimaging provides a potential solution to the need for effective, noninvasive ways to diagnose AD while the patient is still alive (Zhang). For a brief introduction for Alzheimer’s disease, see the video below.

One pathological hallmark of AD is the formation of β-amyloid (Aβ) plaques. In the brain of a patient afflicted with Alzheimer’s, disordered monomers of β-amyloid-42 misfold and create multimers, aggregates, and eventually plaques. Because these plaques are characteristic of AD and are not characteristic of normal brain tissue, imaging agents that bind to these plaques can help diagnose AD.

In designing a radioimaging agent for Alzheimer’s disease, the complex needs to be able to pass through the blood brain barrier, be taken up into the brain, bind selectively to Aβ plaques, and then be cleared from the brain. The conjugate approach of designing a drug links together the radiometal; the bifunctional chelate, which chelates the metal and binds to the biomolecule; and the targeting biomolecule (Figure 3). This approach allows for the fine-tuning of the properties of the imaging agent, the selection of the appropriate biomolecule for targeting, and optimization of the chelating ligand.

Figure 3. Integrated (top) and conjugate (bottom) approach to ligand design (Bartholoma). The integrated approach relies on the imaging agent’s structural similarity to a biologically active molecule for targeting. The conjugate method has a bifunctional chelate, that binds both the radiometal and a targeting biomolecule.

One possible chelating ligand for 99mTc(V) is bis(aminoethanethiol) (BAT), which has been shown to have good blood brain barrier permeability (Zhang). One end of this ligand can be conjugated to a biomolecule such as the 2-Arylbenzothiazole group, which has been shown to have good binding affinity for Aβ plaques, and not for normal brain tissue. The other end of BAT chelates 99mTc(V) (Figure 4). The oxo group, the two thiolates, the amine, and the amide of BAT stabilize the 99mTc(V) ion. Due to this stability and also due to the chelate effect, the complex does not decompose in the physiological range of pHs and redox potentials. Furthermore, because the amine group and the two thiols are deprotonated upon complexation, the complex formed is neutral in charge. The fact that the complex is uncharged makes it more lipophilic, which increases its ability to cross the blood brain barrier (BBB). Another way to fine-tune blood brain barrier permeability is to modify the length of the alkyl chain linking the complex to the biomolecule (Zhang). 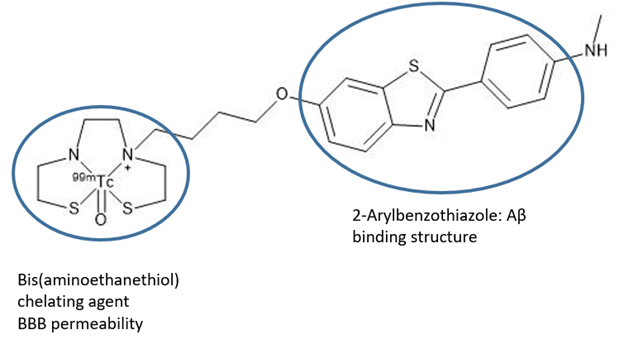 The next step, after designing an potential radiotherapeutic, is to confirm its intended targeting and biological properties. Zhang et al. used the brains of Tg mice, a transgenic mouse model that overexpresses amyloid precursor protein (APP), to observe the targeting of the Tc radiopharmaceutical to β-amyloid plaques (Figure 5). They confirmed this targeting by comparing it to Tg brain slides stained with a fluorescent stain known to bind these plaques. 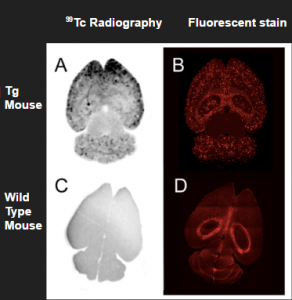 Zhang et al. also observed in vivo uptake of the probe into the brain of a Rhesus monkey at 0-10 minutes post-injection (Figure 6). They also found that the probe begins to accumulate in the kidneys and liver at 60-80 minutes post-injection, which suggests that it undergoes hepatobiliary and urinary elimination from the body. These experiments were performed in two rhesus monkeys, and although this in vivo experiment requires further replication, it signals that the complex is a good candidate for radioimaging. 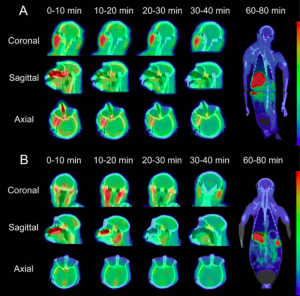 Figure 6. The proposed imaging agent exhibits good uptake into the brain, as well as clearance into the liver and kidneys (Zhang).

Overall, 99mTc could prove to be a promising radiodiagnostic tool, especially in applications like Alzheimer’s disease. The partnership of the radioactive properties of 99mTc, the targeting 2-arylbenzothiazole moiety, and the BAT chelator which allows for BBB permeability could come together to form a useful diagnostic agent.