AO found only in higher plants, present in the cell wall and cytoplasm. It catalyzes the oxidation of L-ascorbate or vitamin C at one site, shuttling a total of four electrons and four protons to reduce oxygen to water at another site (overall reaction shown below). 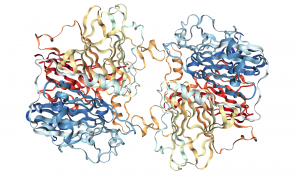 3 domains in each subunit: 4 Cu each 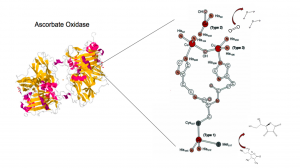 AO uses its different type copper centers to shuttle electrons. AO uses a T1 Cu site in conjunction with a single T2 and a pair T3 site 12-13 angstroms away, arranged in a trinuclear copper cluster (TNC), to reduce O2 to 2H2O. From the figure, above, we see there is a distinct geographic separation of redox activity: ascorbic acid (substrate) gets oxidized at the T1 center whereas molecular oxygen is reduced at the trinuclear (TNC) site. The TNC is linked to the T1 protein by Cys and His residues  (C1021, H1020, H1022) Ascorbate binds and is oxidized at the T1 center and oxygen is reduced at the TNC.

Ascorbic acid needs to be aligned properly in order to fit into the binding pocket at the T1 bound by histidine and tryptophan residues (pictured above).  Through homolytic cleavage of the OH bond, ascorbate gets oxidized (Cu reduced to Cu(I)) to an unstable radical monodehydroascorbate (MDHA) that ultimately becomes DHA.

The electron are transferred from the T1  copper center to the TNC via His and Cys residues. Electrons transfer between Cu atoms of the TNC, reducing them. Reduction of the T3 copper atoms destroys the OH moiety bridge between them and increases separation between the two centers. Electrons are stored in these copper centers until they reach a bound oxygen and reduce it. The exact nature of oxygen binding is undefined. Some research with laccases suggests that it binds to all the copper atoms in the TNC, but a 1993 study with zucchini suggested the existence of a peroxide/oxygen substitute that binds to only one T3 copper that ultimately leaves as a water molecule. This repeats until 4e are transferred and oxygen is reduced to 2 molecules of water. All Cu reductions are Cu(II) to Cu(I). this only accounts for 3e– when 4e– are required.

Main Idea: Research suggests that this happens in a two-step, 2e- reduction.

Why do we want to study small models of these enzymes? 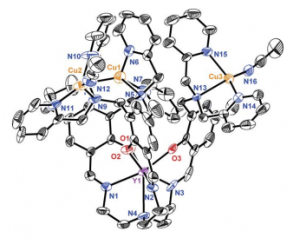 Construction of a Yttrium-Copper complex provides insight to oxygen reduction to water. 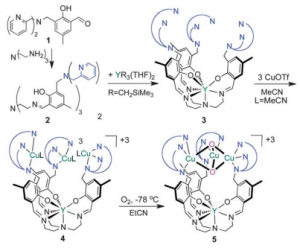 Lionetti et al studied mononuclear sites and other lanthanide based complexes, but found no reactivity with oxygen, so trinuclear site structure is very important to overall reactivity.