Metallothioneins are cysteine-rich proteins that bind Zn(II) and other d10 metal ions, including Cd(II), Cu(I), Ag(I), Au(I), Hg(II), Pt(II), and Bi(III). Their structure is organized by two metal-sulfur clusters that form upon metal ion binding: the four-metal cluster A in the α domain and the three-metal cluster B in the β domain. The functions of metallothioneins include Cu(I) transport, metal exchange, heavy metal detoxification, and radical scavenging, but their primary function is Zn(II) transport and storage (Dziegiel).

Before diving into the structure and function of metallothioneins, here is a quick summary of the important experimental tools used to study metallothioneins and other metalloproteins:

Class I metallothioneins contain 61-62 amino acid residues, of which 20 are cysteines. One common motif is the CysXCys tripeptide sequence, where X represents some other non-cysteine amino acid. Compared to other proteins, metallothioneins are relatively small, approximately 6-7 kDa in size (Bertini). 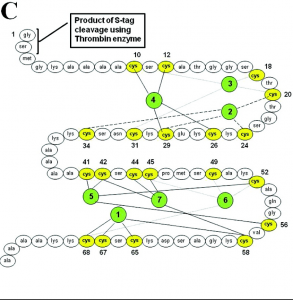 When no metal ions are bound to the metallothionein, it is referred to as apoMT. ApoMT has no distinct structure and is unable to be crystallized, existing as a random coil in solution (Bertini). When metal ions such as Zn(II) or Cd(II) bind, the protein assumes a more well-defined structure, with two domains connected by a spacer. The α domain can bind four divalent ions, while the β domain can bind three. The structure consists mostly of random loops, with very little secondary structure (such as α-helices and β-sheets) (Bertini). 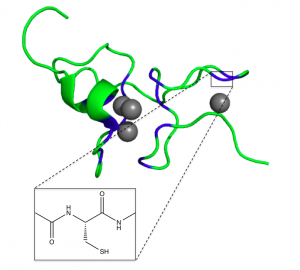 Want to take a closer look at metallothionein’s structure? Check it out in the RCSB Protein Data Bank.

(Hint: Try playing around with the display options. Check the “ions” option to see the structure with the metal ions included. Can you take a closer look at the protein-metal interactions?)

The coordination of divalent ions is tetrahedral in orientation. 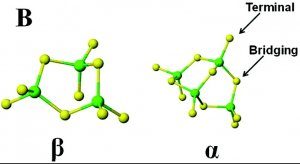 Replacing [A–] with ɑ, the dissociation constant:

With the values of pKa of cysteine=8.0 and physiological pH=7.4, we can calculate the dissociation constant.

This would suggest that only 20% of cysteines are deprotonated in the body, and that the metal ions are bound by thiols rather than thiolates. However, structural knowledge of metallothioneins from NMR studies suggest that cysteines are deprotonated when bound to divalent metal ions. This result may be explained by the presence of conserved lysine and arginine residues in the active site (Bertini). These basic residues may raise the local pH, increasing the percentage of deprotonated cysteine. Furthermore, the binding of zinc competes with protons, lowering the pKa value of the thiol by approximately two orders of magnitude (Maret and Li). 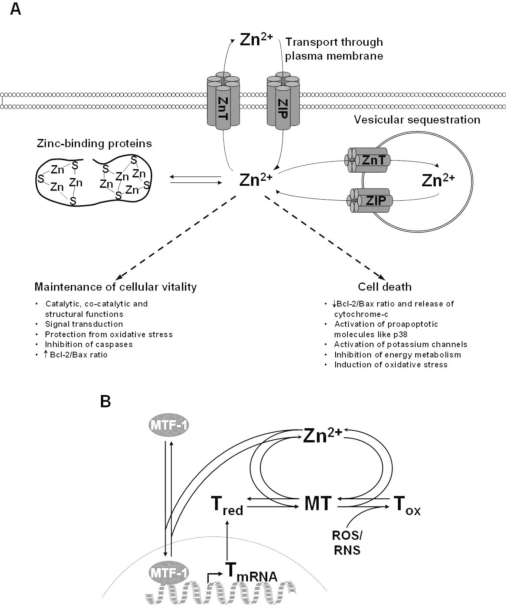 Figure 4. A). Mediators of Zn homeostasis in the cell and (B) the role of MT in Zn binding and transport (Plum)

In the cell, many proteins bind Zn(II), including metabolic enzymes, proteins that participate in signaling, and transcription factors (such as zinc finger proteins). Metallothionein (MT) serves an important function in Zn(II) storage and transport, binding intracellular Zn(II), and helping to regulate its concentration in the cell (Jacob). Depending on the concentrations of MT and Zn(II), MT can exist as a series of partially metalated species, including Zn4-MT, Zn5-MT, Zn6-MT, and Zn7-MT (Maret and Li). MT transfers zinc to other zinc-binding proteins, which means that MTs must not only bind zinc, but also be able to release it.

Although MT binds zinc quite tightly, it is able to transfer zinc to other proteins. One reason transfer is possible is that MT does not bind all Zn(II) ions with the same affinity. In fact, the affinities of MT for different zinc ions differ by four orders of magnitude! Four zinc ions are bound tightly (log K = 11.8), two with intermediate strength (log K ≈ 10), and one more weakly (log K = 7.7) (Maret and Li). MT usually only donates one zinc ion, from the β domain (Jacob).

Another possibility for zinc release is displacement of Zn(II) by other metal ions, such as Cd(II) or Cu(I), which MT binds more tightly than it binds zinc.

Another key way in which zinc might be released and transferred from MT is through the oxidation of the cysteine ligands. Recall that each zinc ion is coordinated by the thiols of four cysteine residues, which are sensitive to oxidation. When the thiols are oxidized, they bind zinc less effectively (their oxidation leads to a decrease in ligand strength). In fact, oxidation agents such as disulfides (including GSSG) and selenium increase zinc release and transfer. Zn7-MT reconstitutes the function of an apo-zinc enzyme (that is, transfers a zinc ion to an enzyme that depends on Zn(II) for its function) over 300% better in the presence of oxidizing agents (Figure 5) (Jacob). 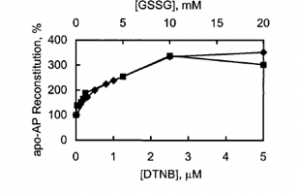 Oxidation of the cysteines in metallothionein, for example via glutathione, results in formation of disulfide bridges (Figure 6). 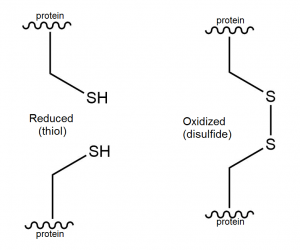 Apo-MT can extract Zn(II) from other zinc-binding proteins. This was demonstrated by assays that showed a decrease in the function of zinc-dependent enzymes in the presence of apo-MT, due to extraction of zinc by apo-MT (Jacob).

These cluster compositions can be reproduced by mixing Cd7-MT and Zn7-MT, allowing intermolecular metal ion exchange to occur. The metals in the clusters of MT are dynamic and can exchange positions (i.e. exchange ligands). The redistribution of cadmium and zinc indicates that metal exchange can occur between clusters both intermolecularly and intramolecularly. The distribution of Cd and Zn depends on kinetic factors, since there is no net change in the number of Cd-thiolate and Zn-thiolate bonds. Zn(II) is kinetically labile, meaning that it exchanges ligands quickly (Nettesheim).

Metals are frequently used in medicine, both as part of treatments (such as the anticancer drug cisplatin) and for diagnostic purposes (such as the radionuclides used for imaging). Recent research has explored the possibility that complexing metal-containing compounds to MTs might be beneficial, either for reducing toxicity or for aiding transport of the compound throughout the body.

A recent paper experimented with the binding of {fac-M(CO)3}+ complexes to metallothioneins, where M=99Tc or Re. By increasing the temperature or lowering the pH, the researchers were able to facilitate the the transmetallation reaction (replacing bound Zn(II) with the {Re(CO)3}+ complex (Lecina). These changes were monitored by circular dichroism, since Zn(SCys)4 chromophores have a characteristic peak at 240 nm that disappeared upon the addition of [Re(H2O)3(CO)3]+, and by ESI-MS.

The intrinsic properties of metallothioneins are what allow for the biological processes they perform. For example, the non-specific binding to many d10 metals allows metals to be exchanged, like Zn(II) and Cd(II). This reaction causes detoxification activity in an organism. The disulfide bond formation/breakdown is what causes metals to be released and bound the the cysteine residues. Also, the hard/soft acid base theory is a factor in binding affinity for Zn(II) and Cd(II). These properties can be taken advantage of in the development of tools in the form of medical diagnostics. Because MTs are nonspecific binders, non-physiological metals such as rhenium can bind, and can be used for medical detection. Current research in MTs involves their role in cancer, as well as the development of MT therapeutics.

Figure 7. The core properties of metallothioneins allow them to carry out their biological functions. Humans can take advantage of these functions for use as diagnostic tools, such as Re binding, and therapeutics.