Siderophores are low molecular weight compounds (500-1500 Da) secreted by microorganisms to chelate and scavenge Fe3+ from the surrounding environment [1]. They are primarily produced by bacteria, fungi, and plants. To date, approximately 500 siderophore structures have been identified [1].

As a model system of metal binding and transport, siderophores have numerous therapeutic uses within the medical field. For example, native siderophores or mimetic molecules are used for metal chelation, diagnostic imaging, and antibacterial therapies. However, humans also encounter siderophores naturally, such as during an infection.

1. The necessity and scarcity of soluble iron

Iron is required by almost all living organisms, playing crucial roles in cellular processes such as electron transport, transport and storage of O2. It is also a central component of many metabolic enzymes, such as peroxidases, hydrogenases, and nitrogenases [1].

Iron is the fourth most abundant element on Earth. It reacts easily with oxygen leading to the formation of compounds in which iron is in the Fe3+ oxidation state [1]. These iron(III) oxides and hydroxides are frequently responsible for the red or yellow color in many soils and minerals. Iron(III) has incredibly low solubility (Ksp = 10-39), making iron acquisition a challenging for living organisms [1]. Many microorganisms, fungi, and plants have solved the iron acquisition problem via the release siderophores, which are capable of scavenging Fe3+ at sub-femtomolar concentrations from surrounding soil and water [1]. 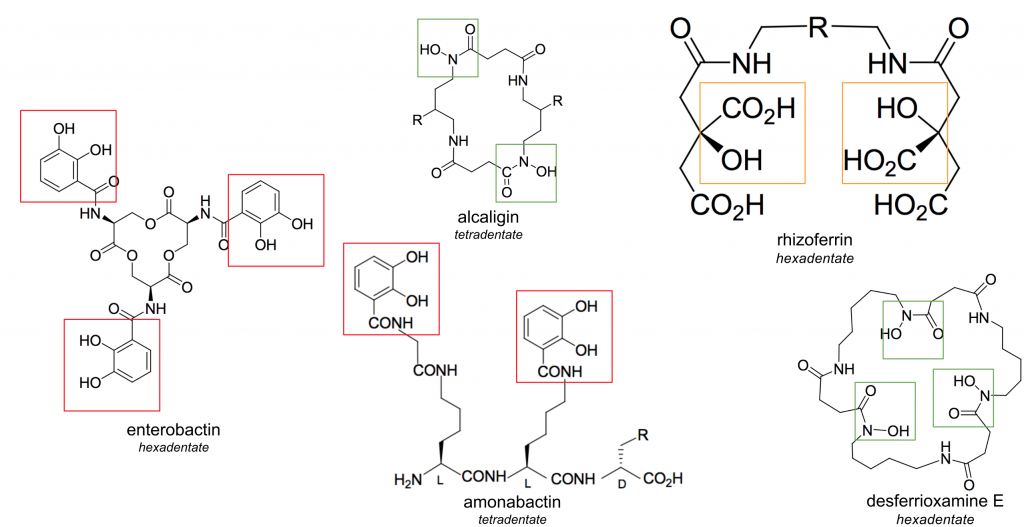 Siderophores generally fall into three categories based on the ligands used to chelate iron: catecholates (phenolates), ⍺-hydroxycarboxylates, and hydroxamates (Figure 1, catecholates = red, ⍺-hydroxycarboxylates = orange, hydroxamates = green) [1]. While the most effective ligands coordinate from oxygen atoms, nitrogen and sulfur atoms are occasionally found in ligand groups. These atoms typically reduce the affinity of the siderophore for Fe3+, generally due to distortion of the octahedral field. Regardless of this occasional distortion, siderophores are the strongest known iron chelators. Of the siderophores shown in Figure 1, enterobactin has a Kf of 1049.0, amonabactin has a Kf of 1034.5, desferrioxamine E has a Kf of 1032.5, and rhizoferrin has a Kf of 1025.3 [1]. This high affinity allows siderophores to bind Fe3+ at femtomolar concentrations.

Siderophores universally have a higher affinity for Fe3+ than Fe2+ [1]. This provides a convenient release mechanism via reduction once the siderophore has been transported into the cell. The greater the selectivity for Fe3+ over Fe2+ the more negative the redox potential becomes [1]. While there are many dipositive cations (Zn2+, Cu2+, Ni2+, Mn2+) that are chemically hard to distinguish from Fe2+, Fe3+ is one of the only biologically important tripositive cations, and can be easily selected for over metals like Co3+ and Al3+ [1]. 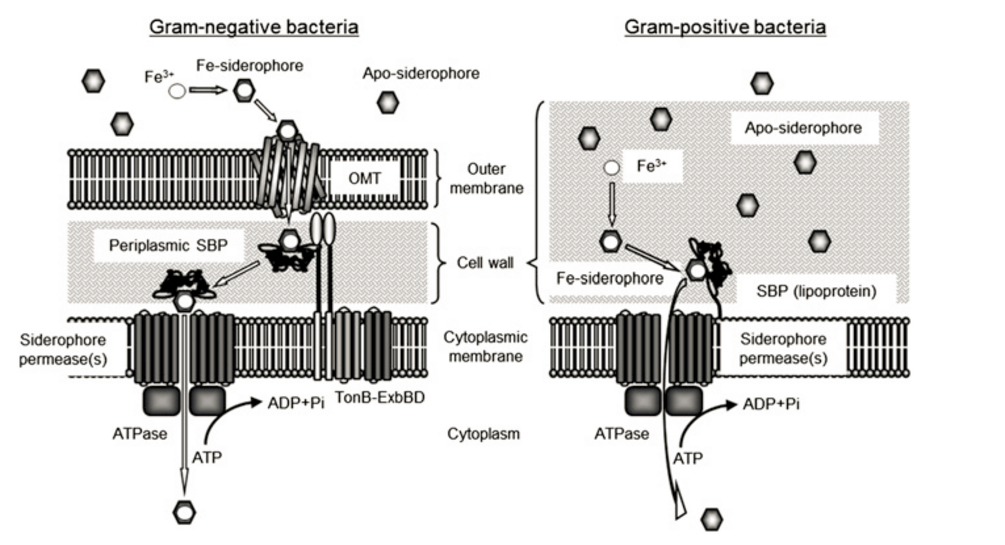 Although siderophore transport has been extensively studied in gram-negative bacteria, transport in gram-positive bacteria shares many similarities with transport in gram-negative bacteria. Both systems require a siderophore binding protein (SBP), which is anchored to the cellular membrane and usually consists of two domains, the N-terminal domain and the C-terminal domain [2]. The cleft formed between the two domains provide a binding site for the siderophore. Upon siderophore binding, different SBPs undergo different degrees of conformational changes, with some Fe-siderophore becoming more buried from the solvent, while others experience only slight changes in the binding cleft, indicative of (though not yet proven) distinct mechanisms of their release [2].

The main difference between transport in gram-negative and gram-positive bacteria is that since gram-negative bacteria have an additional cellular membrane, an additional outer membrane transporter (OMT) is required. These transporters usually are made up of β-sheets that form a barrel (allowing for the siderophore to get through the membrane), a plug domain that functions as a filter within the barrel, and an extracellular domain that confers specificity for a siderophore [2].

Staphyloccocus aureus is a round-shaped, gram-positive bacteria that is a major infectious agent in hospitals [4]. About 30% of people carry S. aureus harmlessly, although strains developing antibiotic resistance, such as Methicillin-resistant Staphylococcus aureus (MRSA), have become a significant problem in hospital and community settings [4]. The Center for Diseases Control and Prevention (CDC) estimates that there are 80,000 invasive MRSA infections and over 11,000 deaths related to MRSA every year. S. aureus has diverse mechanisms of Iron acquisition [4]. 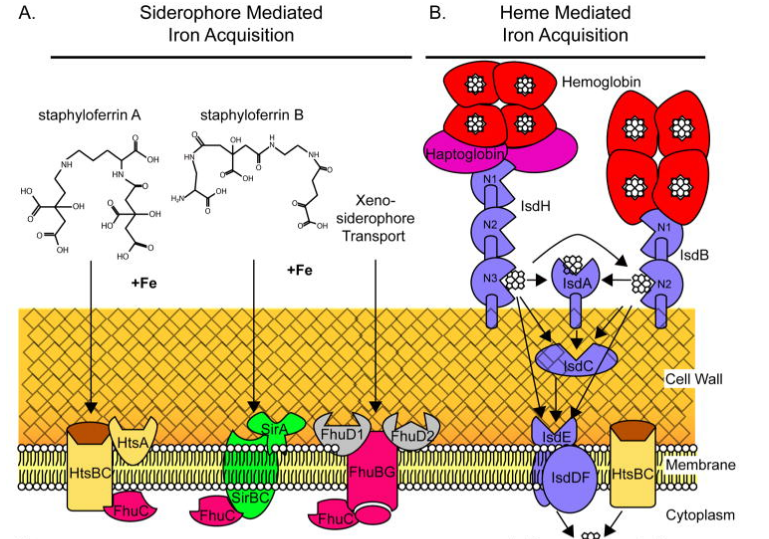 Staphyloferrin A and SA Transport in S. aureus

Staphyloferrin A consists of two carboxylate containing citrate groups as well as a D-ornithine backbone [6]. The citrate groups are joined to the amino groups of D-ornithine by amide bonds. SA coordinates ferric iron in a distorted octahedral geometry, with bond angles ranging between 75°-101°, and bond lengths of 2.0-2.2 Angstroms [6]. The electron density for Fe-SA is distributed weakly around the ornithine backbone, with most of the electron density concentrated on the citrate groups, indicating where SA binds to iron [6]. 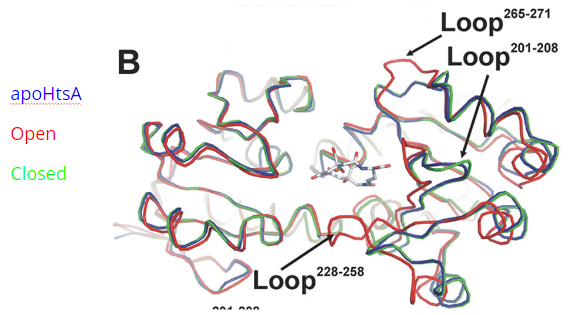 Figure 5. Fe-SA binding in the HtsA binding pocket in the open and closed conformations. Figure adapted from Grigg et al. (2010) [6]

In the open conformation, HtsA binds to staphyloferrin A binds via five arginine residues and one histidine residue. Arg-104, Arg-126, Arg-304, and Arg-306 form hydrogen bonds with oxygens belonging to carboxylate groups of SA [6]. Arg-299 and His-209 forms hydrogen bonds with the ornithine hydroxyl group [6]. As a result of the movement of the three loops, in the closed conformation, HtsA binds to staphyloferrin A via additional residues; Arg-86, Lys-203, and Tyr-239 all form hydrogen bonds with carboxylate groups in staphyloferrin A [6]. This results in the Fe-SA complex shifting deeper into the binding pocket, with solvent exposure reduced from 33% in the open form to 14% in the closed form [6]. Hydrogen bond lengths are also changed from the open to the closed conformation [6]. Interestingly some of these residues are competing with iron for negatively charged oxygen species in staphyloferrin A, as they bind to the same oxygen atoms. It is hypothesized that HtsA adapts two different conformations upon staphlyferrin A to serve as a signal to the siderophore permease, HtsBC, to distinguish between SA-bound HtsA and HtsA that does not have SA bound [6]. This hypothesis is formed on the basis that the conformational change from the open to the closed structure results in movement of a residue moving closer to HtsBC, resulting in the formation of a salt-bridge linkage to HtsBC, though much more investigation is required on this topic.

Siderophores have numerous applications in the medical field, most of which capitalize upon the their ability to effectively bind and transport metals, for therapeutic use. Siderophore mimetics commonly serve as chelation agents for metal poisoning, iron overload and related diseases [7]. In addition, siderophores are widely used in “Trojan Horse” therapies, whereby a cell’s native transport system is hijacked for the delivery of foreign agents. In these therapies, delivery of non-biologically active metals or antibiotics, typically leads to cell death. Finally, siderophores have been utilized as imaging agents for fungal and bacterial infections. 68Ga-siderophore compounds are gamma radioactive, and can be utilized for positron electron transmission (PET) imaging studies [7].

Despite their ability to serve as model therapeutics, humans typically encounter siderophores in the context of infection. During infection, host and pathogen compete for a variety of critical resources, including iron. For the pathogen, siderophores serve as the primary iron scavenger. Due to their extremely high iron binding affinity, siderophores have the ability to strip iron from the host’s transport proteins (i.e transferrin, lactoferrin) [7]. In response mammalian hosts secrete two defensive proteins– lactoferrin and siderocalin (Lcn2). Lactoferrin scavenges labile iron, while siderocalin binds siderophore complexes [7]. Figure 6 provides a visual representation of the host-pathogen interplay for iron.

The siderocalin-enterobactin complex (Scn:[FeIII(Ent)]3-) has been well-characterized and acts as a model system for such a host-pathogen interaction [8]. Siderocalin can bind either apo- or holo-enterobactin with a KD of 0.41nM [8]. The protein’s rigid binding pocket imparts steric specificity, while three positively charged amino acids (R81, K125, K134) intercalate between the enterobactin catechol rings, providing electrostatic stabilization [8]. A hydrogen bond between Y106 and a meta-phenolate as well as cation-pi interactions, provide additional binding interactions [8]. It is hypothesized that upon transport to the endosome the enterobactin backbone is hydrolyzed, yielding 2,3-DHBS [8]. The cleavage is predicted to increase the redox potential of the complexed Fe3+, potentially allowing for host retrieval of Fe2+ with the aid of ferrireductase or an equivalent reducing enzyme [8].
The steric and electrostatic components of the siderocalin binding pocket are suited for catechol-based siderophore complexation. Therefore, ⍺-hydroxycarboxylate or hydroxamate type siderophores typically escape such an immune response. While some pathogens have always produced siderophores including these alternative moieties, several others have adopted modified mechanisms of siderophore synthesis with the intention of siderocalin evasion. An example of such a “stealth siderophore” is anthrax pathogen’s petrobactin. Petrobactin, which is originally synthesized from a catechol-based precursor, exhibits 3,4-phenolate functionality that is sterically incompatible with the siderocalin binding pocket [9].

If you’re interested in reading more about petrobactin and siderocalin evasion, check out this article.

This video provides a good overview of what siderophores are, their structures, and how they function. https://www.youtube.com/watch?v=l2_3ZMQUKC0

A quizlet on some basic facts of siderophores: https://quizlet.com/72569755/siderophores-and-stuff-flash-cards/

A brief textbook chapter with a quiz: https://www.boundless.com/microbiology/textbooks/boundless-microbiology-textbook/cell-structure-of-bacteria-archaea-and-eukaryotes-4/transport-across-the-cell-membrane-33/siderophores-257-7502/