Since cisplatin, the first FDA approved Pt(II) anticancer drug, went on the market in 1978, platinum anticancer drugs have been a great success. [1] Cisplatin has been especially effective in treating testicular cancer; it increased long-term survival rates of testicular cancer patients from less than 10% to greater than 90%. [1] However, as resistances to cisplatin develop and we understand that cisplatin cannot effectively treat all cancers, it is necessary to think about the possibilities of new types of drug delivery and Pt(IV) drugs. [1]

Cisplatin is the canonical Pt(II) anticancer drug. [1 ]There are several characteristics that make cisplatin a good anticancer drug. Cisplatin is soluble in the bloodstream and cytoplasm, has a specific targeting mechanism, and a planned ligand design.1 In cisplatin’s ligand design, it is important that it has a neutral charge, square planar geometry, and two sets of cis ligands–two labile and two inert. [1] These sets of ligands allow for more fine-tuning of cisplatin’s properties, including toxicity, solubility, and lipophilicity. [2] 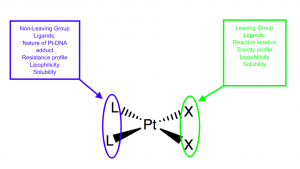 Each set of cis ligands can influence the character of the cisplatin molecule (Adapted from Wilson, et al.) [2].

Mechanism of Entry into Cell 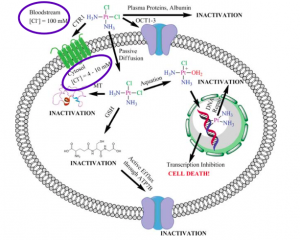 Once cisplatin has entered the cell and been aquated once or twice, it is possible for it to bind to DNA and ultimately inhibit the cancer cell’s transcription and translation, thus triggering cell death. [1] It is important to note that cisplatin prefers to bind to guanines. [1] Cisplatin binds to two adjacent guanines, called crosslinking, at the N7 position. [1] Cisplatin’s ability to bind to adjacent guanines arises from its cis structure, as the cis chlorines can be exchanged for water molecules or for guanines by cisplatin. [1] Cisplatin also prefers to bind on the 5’, rather than the 3’, side of the DNA double helix, potentially because the N7 position is closer to the 5’ side (~3Å) than the 3’ side (~5Å). [3] Once cisplatin binds to the DNA, it creates a kink in it, thus inhibiting cell transcription and translation and triggering cell death. [1]

Pt(II) has an electron configuration of [Xe]4f145d6, which leads to a square planar geometry with four ligands. Pt(II) is a soft acid (atomic radius: 1.83Å) and therefore binds preferentially with soft bases like CN– and CO–. [4, 5] However, it is possible to for Pt(II) to bond with borderline or hard ligands, like cisplatin ligands NH3 and Cl–.

The trans effect is a kinetic effect where ligands influence the lability of the ligand trans to them. It is regarded as being important for transition states, especially for square planar molecules undergoing ligand substitution. Square planar complexes undergo associative ligand substitution, where the incoming and outgoing ligands are both associated with the complex during and therefore creating an electron-dense transition state. This electron density is stabilized by trans ligands with high π acidity (the ability to accept electrons from a metal’s π orbital) and therefore a high trans effect. The trans effect series is as follows:

with molecules at the end of the series having the highest trans effect. [6]

Starting with [Pt(NH3)4]4+ leads to formation of transplatin because the most labile ligand after the first Cl– binds is the NH3 trans to itself. [7]

Cells can develop resistance to cisplatin by binding it with sulfur-containing proteins and molecules like glutathione. [9] Because of the soft base nature and π acidity of these sulfur-containing ligands, these molecules can bind cisplatin with low reversibility and inactivate its DNA binding capability. [6] Some nucleotide excision repair (NER) proteins are also capable of removing bound guanidines and allowing for the repair of crosslinked DNA. [1] Cancer cells with higher expression of these DNA repair proteins are more likely to not respond to cisplatin treatment. [1]

Other downsides of cisplatin include its general toxicity. Cisplatin in vivo localization is poor, and it causes nonspecific cell death throughout the body. [10] Cisplatin is especially toxic to the renal system, causing inflammation and kidney damage. [10]

Pt(IV) prodrugs provide a method of drug delivery in which the medication becomes active once it has been metabolized. Since cisplatin and associated compounds remain the standard of treatment in cancer therapy, high general toxicity as well as potential for resistant cancer cell lines mean reducing toxicity and increasing efficacy is an important field of research for improving cancer therapy on the whole. [1] The use of platinum (IV) is one proposed idea for reducing off-site cell killing. Pt(IV) is inactive due to its low-spin d6 outer shell but is possibly readily reduced to Pt(II) in the hypoxic, reducing environment of cancer cells.

Platinum (IV) prefers six binding partners in an octahedral geometry with two additional ligands to Pt(II). These axial ligands allow for the drug to me augmented in ways that do not affect active (II) form. Ligands that can improve the efficacy of treatment, such as ligands conjugated to other anticancer drugs that are effective in equimolar dosages, can be attached, improving therapy. Further, the two additional ligands provide binding sites for ligand that can improve the localization of cisplatin in vivo. Peptides that bind cell surface proteins that are over expressed in cancer cells provide one option for improving targeting. Nanotechnology, such as nanotubes, gold nanoparticles, or polymeric micelles are additional candidates for improving the delivery of other drugs to cancer tissue that could also exploit Pt(IV). [1]

This video shows an animation of cisplatin interacting with DNA. It specifically provides a valuable visual of cisplatin binding to the guanines of DNA.