Besides lining our pockets like Team Rocket, how else could gold be important to your life?

Rheumatoid arthritis is an autoimmune disease centered on an immune driven inflammatory response capable of causing pain and deterioration of the small joints of the body, as well as complications in major organs such as the heart and lungs (due to that same inflammation). Chrysotherapy, the use of gold based compounds for therapeutic uses, has long been used for rheumatoid arthritis. It is the unique chemistry of gold that gives these compounds, such as auranofin, their therapeutic effect. Gold complexes are preferential to tertiary and primary cationic states. They are also primarily found in linear geometries and in coordination with sulfur atoms. The structural and electronic properties of gold are the result of the relativistic effect. Gold can readily react with many sulfur containing-endogenous compounds in the body, such as cysteine amino acid residues, glutathione, and the albumin carrier protein. Readily exchangeable interactions, gold lability, is amazing chemistry in and of itself, but is also the source of  observed anti-inflammatory therapeutic effects such as  cellular toxicity among others. While complete mechanistic detail for chrysotherapy of rheumatoid arthritis has not been outlined in the literature, gold complexes continue to be a source of fascination. Auranofin, among other compounds, also have therapeutic effects against cancer, HIV, and malaria. Gold nanoparticles, much larger than gold complexes, have novel properties useful in other areas of medicine too!

Background
Rheumatoid arthritis (RA) is the most common type of autoimmune disease, affecting more than 1.3 millions Americans, 75 % of which are women. Symptoms result in severe inflammation, pain, and stiffness in small joints (including the wrist) and major organs, such as the heart and lung due to inflammation. Disease progression leads to  the immobilization of joints from the erosion of cartilage between them (5,6).

The immune system comprises the body’s defense against foreign invaders such as bacteria, viruses, parasites, and fungi. The inability of the immune system to distinguish between self cells and foreign invaders results in unnecessary activation of immune mechanism. Inflammation, the hallmark feature, results in recruitment and activation of immune system cells via soluble signaling factors known as cytokines and chemokines (chemotactic cytokines). Active immune cells (neutrophils, macrophages, cytotoxic T cells, B cells, etc.) These cells release cytotoxic chemical and eat away at their target, in this case, us! 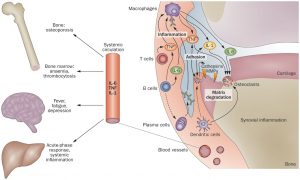 Inflammation in RA is caused by activation of T cells, B cells and macrophages, which releases cytokines such as IL-1, IL-6 and TNF. These cytokines cause local joint damage through increased production of metalloproteinases and activation of osteoclasts. IL-1, IL-6 and TNF also leak out to the blood stream resulting in systemic inflammation: anaemia, thrombocytosis, fatigue, osteoporosis and the acute-phase response. Abbreviations: IL, interleukin; RA, rheumatoid arthritis (3).

Treatment seeks to relieve symptoms and immune system mediated damage via anti-inflammatories (NSAIDS) such as ibuprofen. In more severe cases, disease-modifying antirheumatic drugs (DMARDs) and immunosuppressants are used. Chrysotherapy (the use of gold containing compounds as therapeutics) is an older DMARD, two important examples are myochrysine and Auranofin. These can be can be injected or swallowed as a pill, respectively (5,7,9).

Gold is a noble, group 11 element with an electron configuration of [Xe] 4f14 5d10 6s1 .Elemental forms are stable a wide range of conditions, including aqueous environments. It exists in oxidation states -I to +V , where  Au(I) and Au(III) are the most common.  In vivo (living organisms), gold exists as Au(I) in primarily linear coordination complexes—trigonal planar and tetrahedral forms exist as well. As a soft acid, it prefers ligands such as sulfur over hard bases such as nitrogen and oxygen.  Au(III) prefers square planar geometries, is a hard acid, and is implicated in toxicity. Gold complexes discussed here are in the gold oxidation state, with properties governed by something called relativistic effects.

These have to do with the change in physical and chemical properties of gold due to its high nuclear charge that make its electrons orbit the nucleus at higher mass and speeds. According this theory, (E = mc2)  mass interconverts with energy at the speed of light.

In a post-lanthanide element such as gold, a very high nuclear charge (+79) creates an electric field that prompts inner s electrons to move closer to the nucleus at speeds approaching c (3×108m/s).

We are used to thinking of mass as a fixed quantity. For elements like gold, that isn’t the case! For electrons in gold, because they are moving at high speeds approaching c. As v increases, relative mass increases, which is associated with a proportional amount of energy.

Think like a physicist! Einstein’s Theory of special relativity relates to chemical properties. 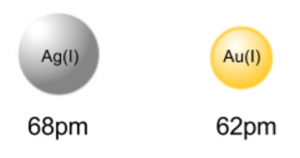 Other consequences of this phenomenon are as follows

There are four main drugs used in the treatment of early stages of rheumatoid arthritis: Auranofin, Myochrysine, Sodium bis(thiosulfate)gold, and Solganol. These are gold (I) complexes administered to RA patients via ingestion or injection. Inherent in acid-base chemistry of Gold (I), the soft metal prefers soft bases, as seen in the interaction between Au-S. This bonding is relevant in the biological effects in the treatment of RA. 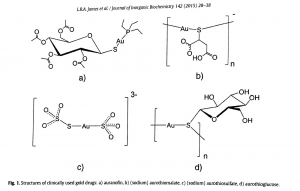 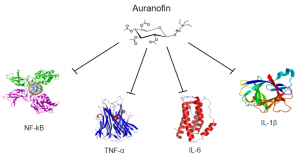 The mechanism of action for the interactions between auranofin, other Au (I) complexes and proinflammatory enzymes is unknown. Other studies have suggested gold (I) interacts with sulfur on cysteines in human serum albumin, so it is hypothesized that inhibition is caused by gold interactions with cysteine residues present in the active sites of these compounds.

Gold (I) metabolites are also formed in the body via redox reactions (e.g. ligand substitution reactions). These drugs offer other possible therapeutic effects, but can also cause toxic effects. These effects are not permanent, but reveals there are still factors that need to be fined tuned for better application of chrysotherapy.

Gold complexes such as auranofin have medicinal effects outside of RA treatment. There are some anti-cancerous properties to gold complexes, as shown in  HeLa cells and P388 leukemia cells. In HIV, gold complexes have also been shown to increase CD4+ T cell counts, a major determinant of disease progression.

Gold in other forms, such as in a nanoparticle, have novel properties and functions. Gold nanoparticles have been shown to be key in the development of a immunochromatographic assay targeting hormonal detection du9  as well as in the enhancement of mRNa translation in insulin and green fluorescent protein in HeLA.