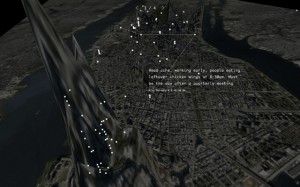 By revealing the social networks present within the urban environment, Invisible Cities describes a new kind of city—a city of the mind. It displays geocoded activity from online services such as Twitter and Flickr, both in real-time and in aggregate. Real-time activity is represented as individual nodes that appear whenever a message or image is posted. Aggregate activity is reflected in the underlying terrain: over time, the landscape warps as data is accrued, creating hills and valleys representing areas with high and low densities of data. 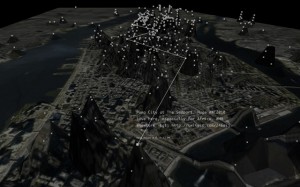 Invisible Cities maps information from one realm—online social networks—to another: an immersive, three-dimensional space. In doing so, the piece creates a parallel experience to the physical urban environment. The interplay between the aggregate and the real-time recreates the kind of dynamics present within the physical world, where the city is both a vessel for and a product of human activity. It is ultimately a parallel city of intersections, discovery, and memory, and a medium for re-experiencing the physical environment.