‘Sprague’s’ occupies a unique place in the memory of North Adams, reflecting residents’ work values and community pride. For decades, the electric components manufacturer served as the city’s industrial backbone, employing more than two thousand people. Work at Sprague could be tiring, tedious, and not always steady. Nonetheless, many employees considered it a good job; they started and finished their careers at Sprague.  Former employees frequently remark that the atmosphere at Sprague’s was familial, sometimes literally so; it was not uncommon to see multiple members of the same family working the same shifts. As former Sprague employee Linda Saharczewski remembers, relations between workers were cordial and respectful.

I felt comfortable, I always felt comfortable there. I never felt as if… sometimes when you go to work somewhere, you know, you want people to like you and you want to get along with people…I never had to worry about that because there were so many people and they were all really friendly and really nice. And…the chief executive officers and the owners, they worked just down the hall from us and I think they kind of set the tone because here were the people that created this business and were running, I mean, they were the top people in the business, and they were just as friendly as the person working in the mill down the street, you know, they were very, very nice people and very friendly. 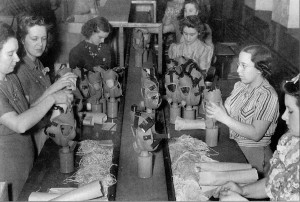 The company encouraged a certain filial piety for upper management, and encouraged mutual respect between the assembly workers and administration. This policy was supported by the gendered separation of female-dominated production work and male-dominated upper management. This sense of reverence was also reflected in the company’s relationship with North Adams itself. Given Sprague’s dominance in the city’s economy, it was in the city’s best interests to keep the company stationed in North Adams. As long as Sprague continued to keep its doors open for business, residents would tolerate lower salaries and limited benefits. Otto Wied, a former employee at Sprague’s Research and Development Center, describes this unique relationship.

R.C. [Robert C. Sprague] ran, and I shouldn’t even say ran it, it’s just that…you had a patron. A kind of a laissez-faire. You had a patron at the top who controlled a certain area. The people there owed a respect to the patron. The patron owed a debt to the people. That was very much the way North Adams felt towards the Sprague Electric Company. Sprague Electric Company didn’t pay us great pay, but it was good salary and it was a good place to live, and we knew when my kid got to be 18 and got out of Drury [High School] he would have a job. We can find something for him. It was that kind of an attitude. 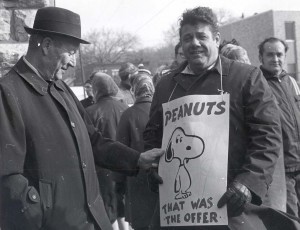 Robert C. Sprague [left] reads a protester’s sign while inspecting the picket line. The CEO would make frequent appearances to the picket line; relations between management and labor remained relatively cordial during the 10-week affair. Picture courtesy of the North Adams Historical Society

While this hierarchy seems outdated from today’s perspective, multiple interviewees describe their pride in the mutual respect between management and labor. There was a sense that–in exchange for diligent work–Sprague would provide for the community, offering jobs for recent high school graduates and guaranteeing steady employment for decades. The job stability that Sprague offered played a large role in the community of North Adams. Lorraine Maloney, who started work at Sprague at a young age, found that employment at the company gave her a new sense of confidence and pride.

That was a really good learning experience…and you learned to deal with the public and you…felt better about yourself, you know, because you know that you’re capable then of doing things. I’ve always been very quiet, very shy growing up, so that really helped me a lot.

Sprague’s relationship with the city of North Adams changed in the spring of 1970. Starting on March 1st, Sprague’s unionized workers went on strike against the company, hoping to gain leverage in a wage dispute. The strike has become something of a legend in the memories of former employees, and many mark it as the beginning of the end of industry in North Adams.  Despite this, strikers like Rose Marie Thomas recall the sense of camaraderie and occasional moments of humor that sustained workers through the difficult 10 week work stoppage:

Oh! Well that was fun walking around and around…People would come in, of course we knew the bosses were in there doing our jobs, but we had to go on strike! Walked around, walked around and around, oh and if I wasn’t there I was in the headquarters on Main Street, I don’t know what I was doing there…I remember sitting in the window looking out. Must have been something I did in there but I don’t remember, it was a long time ago. But I remember the parties they used to have on Main St. Boy they’d get drunk. And then we had our union meetings, a lot of yelling, you know a lot of yelling. I remember that, so…

The strike’s impact spread to other employees at the company, many of whom were expected to continue production. Working during the strike meant confronting friends and family on the picket line. As Saharczewski discusses, mutual understanding existed between workers on either side

Having to walk through a picket line wasn’t just kind of pushing your way through, you didn’t know what was going to happen, you didn’t know if someone was going to throw something at you, I mean, they actually really feared for their well being…They also didn’t like the idea that these were people that they were friends with…. it’s like what I had said before…you become friendly with anybody, with everybody, it doesn’t matter what your stature is. People that you see every day and talk to every day and here they are, barring you from going in to make your living, to do your work, but you know the reason that they’re doing it is good. I mean, they really, they really needed to fight to get some of the privileges that they deserved and get the pay that they deserved and the benefits and things like that. So that was a tough thing for a lot of people.

In a gesture of reconciliation, IUE [International Union of Electrical Workers] members thank Robert C. Sprague after the conclusion of the strike. Picture courtesy of the North Adams Historical Society

Multiple interviewees stress the change in labor-management relations that followed the strike. Tensions mounted as Sprague Electric began to experience greater economic difficulties. By the late 1970’s and early 1980’s, it seemed evident that Sprague would leave North Adams. The stability and job security that Sprague had once provided began to unravel, and with that came the loss of the amity that had once defined the relationship between management and production. Robin Martin describes the pressures of working at Sprague during its decline.

You knew you couldn’t count on your job. I remember one morning they called us all into the cafeteria and the head of the department had security guards all around him. When he announced that they were sending yet another line to Mexico, he was terrified of our reaction at that point. And then he lied and said he would fight to keep jobs. And he didn’t. He moved with them.

Sprague closed down production lines starting in the early 1980’s. In 1985, the company announced that it was moving out of North Adams. As the last major industrial manufacturer to leave the city, Sprague’s departure represents a transition point in the history of North Adams. Steve Melito, a former summer employee at Sprague, notes that the loss of Sprague is the hole in North Adams’ soul…if you look at…the Sprague Electric Company’s ‘Long Goodbye’…it’s still this process of saying goodbye to this very significant employer…

As North Adams diversifies its economy, the city can hope to recapture the sense of community and employee pride that companies like Sprague once developed. 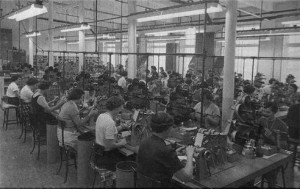 One of Sprague’s capacitor lines. The company promoted camaraderie and work ethic among their employees. Picture courtesy of the North Adams Historical Society