It’s so very different. There were stores everywhere. Every building had a store in it. Now, they say shop local. I think that the idea is wonderful, but there are very few stores on Main Street where you can shop any more over there. In those days, it was wonderful.  We got paid on Wednesdays, when we moved to Marshall Street at the Sprague Electric Company. And you’d go up on Wednesday or Thursday nights, the stores were open late, just mobbed with people. Now you see a few people here and there, it’s just sad. You know, once they started doing the malls it killed the small cities. We used to have specialty shops. They did all the bedding, towels and so forth. They could no longer exist. So those all closed up. But it was just wonderful. You go down Main Street and you knew just about everybody and now you don’t. The city has changed a lot.

Like Maloney, many people explain that not only has commercial activity on Main Street declined, but also the nature and composition of its businesses have changed. In addition, interviewees discussed Main Street’s role in the community and its importance to their own experience living, working, and shopping in the North Adams in the past and the present.

Rose Marie Thomas describes Main Street as a vibrant commercial center in the 1940s when she accompanied her father on Main Street excursions as a child:

Oh well I used to go places with my father, he would take me to Newberry’s, which of course is gone, so he’d go in and get a seat, order me a donut, and I’d immediately go right over to the donut machine and watch it. Donut go down, into the grease, and it would go around, turn over, and go out the door and I’d just stand there and watch it. I liked to do that it was fun. Newberry’s was fun there was a lot—you could buy everything there, all kinds of stuff there. I remember downstairs they also had cookies, and then the five-and-dime.  We had a lot of stores back then. 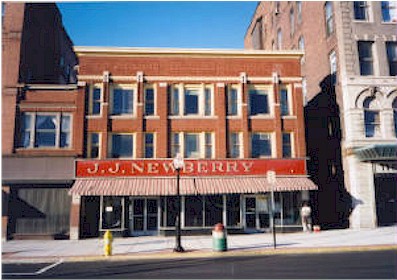 According to a New England business directory from 1854, 75 Main Street originally housed the clothing store of Morris Gatslick. Newberry Company purchased the building in 1920, and, as the excerpts reflect, J.J. Newberry remained a popular and iconic store on Main Street into the 1990s. Today, a hair salon called Shear Madness occupies the building.

Delaigo’s Diner, a victim of urban renewal in the 1970s, emerges as another landmark Main Street business. Thomas remembers trips with her father to DeLaigo’s where she enjoyed other sweet treats:

When I was a little girl my mother used to say “now Tom, don’t you take her in Jack’s or Delaigo’s diner!” I guess because there was going to be men in there. My mom wanted three perfectly, perfect little ladies–I’m sorry I was a tomboy back then. She didn’t get me into a lady. So my father would take me where? Jack’s. Delaigo’s. I loved it, I loved it! I’d go in Delaigo’s I’d get the strawberry pie and a red cream soda. I remember that. In fact I’ve got a book with a recipe in it from Delaigo’s, and a picture of the diner. We had a lot of places we could go in North Adams.

On the south side of Main Street, there was a place called DeLaigo’s Restaurant, it was a diner, and it was three brothers- and the family ran this diner, and they had the best pie, all homemade pies, you know, after a ball game or a dance at the Blue Haven Hall which was held over on Webber Avenue.

DeLaigo’s was one of many social nodes on Main Street, and its connections to other institutions and traditions suggest how its loss, and the loss of those like it, may have had rippling and confounding effects on the community.  For Perenick, Main Street businesses were memorable and important for many reasons:

But the buildings, the part of the buildings there, they were, the architecture was beautiful. The North Adams bank was the National Bank, I can remember my mother taking me there and open up a savings account. And I was just a young guy. And we knew, my mother and father and I, where we lived, down the road there was the vice president…  So we knew, so that’s the place you want to go, you open up a account there, and I don’t want to say it too loud but I still do business there, after all these years.

To the left, North Adams National Bank building, one of urban renewal’s early casualties. To the right its opulent, marble interior. Note the mural above the mantle on the left.

As Perenick suggests, the commerce on Main Street reflected the strong communal bonds of the North Adams of his youth, which he broadly describes as both a time and a place when “everybody knew everybody.”  Resident Robin Martin considers that the loss of this sense of community is one of the most important differences between the North Adams of her youth and today:

About North Adams?  I was on East Main St., that’s where all the Canadian French families, there and Front Street, and, you know, ten or fifteen kids would go wandering off and come down and watch a movie together, that type of thing, something that kids today don’t know because you can’t leave your neighborhood unless you’re 14 years old. That’s one of the earliest things, just coming down on Main Street. Penny Candy… Just silly stuff like that. You know, riding your bicycle, … saying bye to your mom after breakfast, riding your bicycle all over the place, coming back for dinner. You know, it was a different world.

Many of the interviewees commented on the relationship between Main Street and local industry.  Main Street was in walking distance of the town’s major employers, in particular Sprague’s Marshall Street location and James Hunter. Machinery Company  Otto Wied, a former Sprague researcher, recalls:

It was a very nice community. The Hotel Richmond was on the corner of the main street and the road that leads to the old station. And the Wellington was across the street.  That is no longer in existence and neither is the Richmond. We used to eat lunch, some of the pals that I had from Sprague, would meet for lunch at the Richmond.

There were three movie houses, there were all kinds of…restaurants, little places. Nothing big, but local bistros where you’d stop in. Thursday night was the big night. Everybody went out, mainly because I think payday was on Wednesdays…cash their check on Thursdays and everyone went shopping! And Thursday night was ‘Big Night Out’, the town lit up, as much as North Adams could light up.

Thomas provides a linear outline of the process behind this Main Street tradition:

I remember when I worked at Sprague, Thursday was payday we’d all go down street, cash our check, go to our restaurant and eat, and then we’d shop in the stores, and then when Sprague closed that hurt Main Street.

From the 1950s to the 1970s, local government initiated a series of federally funded “urban renewal” projects as a means of clearing vacant and decrepit buildings, and to stimulate the town’s ailing, but increasingly important, commercial sector. When these projects concluded, the south side of Main Street was almost completely razed, along with Bank Street and other downtown areas. The redevelopment that followed was sluggish, and various retailers, including K-Mart and Sleepy’s, tried unsuccessfully to establish a lasting presence in the big-box lot that replaced Bank Street. Today’s Main Street differs from its predecessor a half century ago both in terms of its physical layout and the composition of its tenants.

The picture on the left-hand side depicts Main Street from the SW circa 1950. The first prominent building on the picture’s left-side, which stands on the NW corner of Bank Street, is the PJ Boland block. Its namesake, a specialty tailor and clothier, erected it in the latter half of the 19th century to serve as his storefront. In 1950, it was the home of NA Trust Company. The second to last visible building on the right is the Richmond Hotel. The picture to the right depicts the south-side of Main Street looking east circa 1970.

By the time Steve Melito was a boy in the 1970s, Main Street had lost many of its businesses but still retained some of its former glory.

It was like this little counter ice cream shop and it was in the back of 85 Main Street. And 85 Main Street at the time had lots of little stores like a shoe store and if you were going to get your eyes checked you would go there and it was the one place in town that had an elevator so for us that was a big deal if you were going to take the elevator. The other store that I remember, thinking about these contraptions is England Brothers had an escalator and that was a big deal, going up and down the escalator and then I think it became, no it was the Boston store first and then England Brothers but either way we had a clothing store that sold, you know, not discount clothing because we had jobs that weren’t discount jobs at that point.

Like Melito, Linda Saharczewski experienced a newer Main Street but one that still retained many attractions.  Saharczewski lived in Adams, but traveled to North Adams because there were little things like that where when we went into North Adams, the stores were a little bit bigger, everything was just a little bit bigger up there, so that’s what kind of made it exciting to be there.  Reflecting on the difference between the two towns, Saharczewski recalls:

Well, they had a movie theater there and everybody would go to the movie theaters and then they had lots of places to go shopping, either big shops, little shops.  They had the J.J. Newbury Company, which was, being as a little kid going there with your parents it was so exciting because they had all the toys there and they had the different floors where you could go on, one floor had an ice cream counter so you could get sundaes and things like that. You know, there was lots of little places to go shopping or walk through. I used to love walking down Main Street in North Adams because just looking through the store windows and shops and things like that, it was great.

Today, the south side of Main Street contains a discontinuous series of new, single story buildings, which a large, and typically vacant, parking lot divides where Bank Street formerly intercepted Main Street. Franchises and national chains, such as Radio Shack, Label Shopper, Peeble’s, Olympia Sports and H&R Block have replaced the specialty stores, local banks and restaurants (including DeLaigo’s) that previously occupied multi-story buildings, some of which, such as the Davenport Block and the First Agricultural Bank, boasted magnificent facades comparable to the iconic buildings that remain on the north side of Main Street. A small Movieplex located within south Main Street’s big-box development is all that remains of Main Street’s theatrical heritage, and to the east, on the plot where the regal Richmond Hotel stood for nearly a century, sits the Holiday Inn, the sole hotel in North Adams today. Although the North Side has remained structurally intact, first floor vacancies are noticeable across many of its former commercial stalwarts. 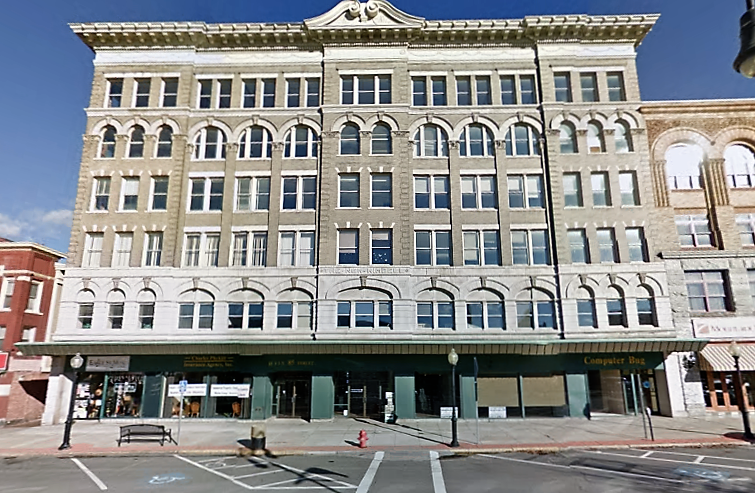 Impressive as ever, the oft-mentioned New Kimball building at 85 Main Street is no longer the thriving commercial block it once was.