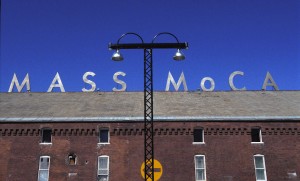 MASS MoCA opened in 1999 and, since then it has become the largest contemporary art museum in the country, garnering praise and visibility. The museum draws thousands of tourists to North Adams every year, but local residents’ views of the museum remain mixed. After Sprague closed in 1985, much of the community saw MASS MoCA as a beacon of hope for the struggling economy. At that time, many believed that as long as Sprague’s former buildings were unoccupied, North Adams would remain stuck in the shadow of the factory’s closing. But residents also worried over the lack of jobs in the city and whether an art museum could bring an economic revival. In 2016, MASS MoCA is on the precipice of another huge expansion project, largely funded by the state. It seemed important to revisit the relationship between North Adams and MASS MoCA and examine its role in North Adams’ changing identity from a post-industrial factory town to a tourism-focused, culture hub, placing North Adams in the international sphere.

The museum both has failed and succeeded in meeting residents’ expectations. Robin Martin, a lifelong resident of North Adams, credits Mass MoCA with connecting the city to life outside the area. Even so, MASS MoCA cannot fill the place of a single large employer the way Sprague did, which still is anchored to the North Adams identity.

I think it did change the face of North Adams in that it made us more aware of the rest of the world.  Because before that, here we were.  We didn’t have to worry about anything that was going on anywhere else unless it was a major war.  When Sprague went out and MoCA came in, many people resented the whole thing.  I don’t think MoCA itself gives back that much to the community.  However, all the little fingers that come off of it [do].

Like Martin, former North Adams resident, Steve Melito, questions who benefits from MASS MoCA. Is MASS MoCA here for, tourists or residents? And can both groups benefit?

MASS MoCA? I give a big sigh because it’s better. North Adams is better that it exists, but North Adams is not nearly as well off as the hype would like us to believe. So why do I say that? You know, it’s great that there’s a world-class museum in that building. It’s great that tourists come in, but MASS MoCA has not been a job creator for the people of North Adams and it tends to be an island unto itself so that when people come to visit North Adams, they stay on the MASS MoCA campus and they don’t leave for whatever reason so the tax breaks go to MASS MoCA, the dollars go to MASS MoCA, but there’s not a lot of jobs for local people. 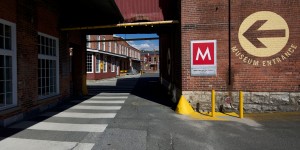 Melito has seen first-hand the limited impact that MASS MoCA has on the local business community.

I think people are always willing to start their own shops in North Adams. My wife had a consignment-clothing store. So this is maybe kind of an example. She was on Holden Street which is not far from MASS MoCA and she was hoping to get some of the overflow traffic from MASS MoCA and when there were events at MASS MoCA she was, you know, pretty successful.  But there’s not enough that happens at MASS MoCA for it to spill out and benefit the rest of the community.

Rose Thomas, who worked at Sprague for several decades, believes that many residents’ have unreasonable expectations for the museum. An enthusiastic supporter of MoCA, Thomas frequently volunteers during performances and other special events.

Oh I think it’s great now. When MASS MoCA first came out somehow people got the idea that everybody in North Adams was going to have a job at MoCA. It’s a museum, not a job center, it’s a museum! They hire a lot of people of course, but they can’t give everybody a job… I love it but not everybody loves it. We need jobs, we need jobs; My mother was like that, “we need jobs.” Well all small towns need jobs, it can’t be helped. We need factories, well let’s face it people the factories are gone, they’re now museums, and various other things.

Like Thomas, Colleen Taylor, a local business owner, questions people’s assumption that MASS MoCA would literally and figuratively fill the hole that Sprague left when they closed their factories in North Adams. Taylor owns and runs restaurants in Williamstown and North Adams and believes the museum has helped close the distance between the two neighboring towns.

When I first arrived they were all talking about this MASS MoCA happening. MASS MoCA coming to town and a museum coming to town. And so I think there’s two things. When we first moved here there was this line, very thick. What I mean by that there was this you know, thick line between North Adams residents and Williamstown. And even though the line – it’s an imaginary line – still exists, it has dwindled down to like, it’s almost transparent it’s dwindled so much….  people had a misnomer about what Williamstown was like and what North Adams was like. Williamstown thought North Adams was one way and North Adams thought, and as the line has dissipated it started to get quicker, the dissipation. It was a lot to do with the museum. The museum, I think some of the older people couldn’t see how, couldn’t imagine the museum, Mass MoCA, transcending a few of these, you know, remaking the whole city. And it took a long time for them to get there. I mean it’s been twenty years since I’ve been here, and when we first moved here they started doing things over there at the Mass MoCA…. In the beginning there was even from the – the locals wouldn’t necessarily go into Mass MoCA. Now they’ve really come to accept it, and I think that has been done not just by the visual arts there, but by some of the businesses that are there now and some of the museum, some of the concerts they have. People have come on campus and once they go on campus it feels more comfortable for them to go back and forth. Along with these examples of positive experiences with MASS MoCA, Sprague’s ghost remained a strong piece of the story and remains as a part of the legacy of North Adams.

Lorraine Maloney, Otto Wied and Linda Saharczewski, all former Sprague employees, still have vivid recollections of Sprague that trips to Mass MoCA rekindle. Lorraine Maloney appreciates that the museum continues to use equipment from Sprague that symbolizes the high quality work completed there:

If you go to MASS MoCA they have the little restaurant down there, not the big one but the other one and they have these little metal stools. These women sat on these stools all day long. Some of them brought little pads to put on them and I’ve got pictures you know of some of the women working in there doing the same thing over and over all day long but they took pride and they loved what they did over there.

Otto Wied, who used to work in the Research Division, feels mixed emotions when he recalls what was formerly in MoCA’s space:

The first main big room right off the, entrance lobby, that was Building 4 and my original office and lab was on the top floor in the…northwest corner. And I can walk in there and look up there and I see a window and say: I used to have the office that looked right out of that window down on River Street. And it still bothers me. I don’t enjoy going in there.

Like Wied, Linda Saharczewski feels reluctant to see what now occupies Sprague’s space.  Saharczewski expresses curiosity but mostly she is uncomfortable that the complex still holds many memories and signs of what is past : 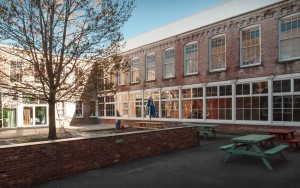 I haven’t gone through a lot of the buildings. It’s hard. I don’t even know how to explain it but I mean, I want to one of these days, but I’ve gone through a few, I’ve gone, and… you immediately feel that feeling again, that you were back there. You know, when I go into the courtyard, I remember walking across the courtyard and I remember, I look and I can see in my mind the cars and whose cars used to be parked in the courtyard and it was, you know, Mr. Sprague’s car and it was, you know, Mr. Welch’s car and you knew that they were all there and you knew that this building here, this was where the security guys were all the time, you know, and you could always stop in and talk to them… it’s kind of one of those things where when you’re there and you look around and if they change something, it will bother me because I say, what was there before? There was something there before, what did they do to it? … I’m happy that there’s being something done there but it’s really, it’s kind of like going to a cemetery, in a way because it was a place that was, you know, full of life and it was vital to the community, vital to the whole area and… it’s gone now, you know?