For most of the 20th century, North Adams had five Catholic churches: two served the French Canadian community, two catered to Irish parishioners, and one was for residents of Italian descent. North Adams’ small Jewish community built a downtown temple. The so-called Steeple City also claimed a Presbyterian Church, a Methodist Church, a Universalist Church, and an Episcopalian Church. 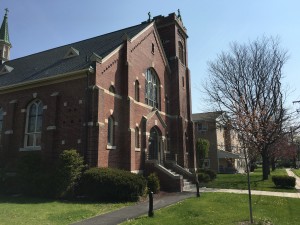 Holy Family Church on State Road has been renovated into apartments

Residents recall the important role that churches played for every community and neighborhood in the city. Each Catholic community ran their own elementary school staffed by nuns. In the first half of the 20th century, many children were baptized, confirmed and married by the same neighborhood priest; grandparents, parents and children usually belonged to the same parish. Church attendance was expected and mass was often conducted in Italian or French. According to Billy Perenick, who grew up in North Adams in the 1940s, after Notre Dame church put down roots, the French Canadian community gathered nearby.

The French church wasn’t too far from the library on East Main Street and the people kind of settled around the church, as people came in from Canada and people, the French old-timers, they had a mass there. When I was growing, it was always in French. They had a school there and they had a convent and I can remember the nuns had a black outfit with a big hat with the white trim.

By the 1960s, the role of churches began to change. The Jewish Temple and St. Anthony’s church were demolished as part of downtown urban renewal projects. Fewer nuns and priests made it harder to maintain parochial schools and separate parishes. Steve Melito recalled that while the city’s ethnic communities were not geographically separated when he was growing up in the 1970s, churches continued to reflect and reinforce specific cultural traditions. 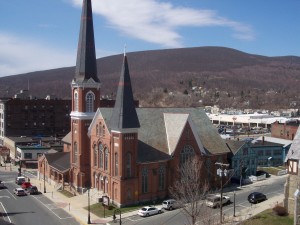 By the time that I was born and alive I was a part of that generation that was really ethnically intermixed, but there still was ethnic identity in terms of the local Catholic church you belonged to. I was a part of St. Anthony’s which is now St. Elizabeth’s, but that was always known as the Italian church and people would call it that. And then there was Notre Dame, which they called the French church. And those divisions among older people are still in their minds but less so with my generation… When I was a kid I remember being in catechism at St. Anthony’s church and we had an older lady who was the catechism teacher and she was a substitute so she was just kind of filling in and she asked their names to take attendance and she was surprised that there was a kid in there that was not Italian. And she asked this kid: what are you doing coming to this church? To think that now is crazy, but that’s how people thought.

Aside from their role as centers of religious life and cultural identity, the churches often doubled as community centers. Opening their doors to people of all ages in the surrounding neighborhoods, churches hosted recreational activities, sports leagues, after-school programs and other activities. Perenick remembers:

Notre Dame always had something going on. And they also had Boy Scout troops so we got to go to all these different churches. The churches also sponsored a basketball team, they called it Church League, so if you didn’t play high school ball, and if you’re working part-time you weren’t able to practice with high school, there was another group of the Church League. 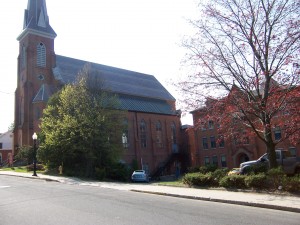 During many of our interviews, North Adams residents remarked on the diminished influence of structured religion in day-to-day life. As the population has decreased, and perhaps as the influence of religion has waned, many of the local churches have closed. While residents understand the factors that made it unfeasible to sustain so many churches, they found the constriction stressful. Judith McConnell remembered how the downsizing led conflict as multiple churches’ traditions began to clash.

Initially when they yoked together St. Francis and Notre Dame and it was like “you can’t sit here,” you know. “This is my pew.” Even though there’s no names or reservations or any of that stuff. But they weren’t very welcoming. And that’s kind of going away.  I mean some people probably still feel it but I don’t, you know. That’s minor.  And I left St. Francis one Christmas Eve. My kids were home and we went to midnight mass and it was up at Notre Dame because the priests were serving both places. And it was the worst mass I ever attended. And I always felt midnight mass was so joyous and so uplifting and it was horrible. And then we came out of there and somebody hollered at me for parking where I parked and I said to my kids, “that’s it. I’m out of this place. What is with these people?”

Today, only one Catholic church remains open in town, and many of the Protestant congregations have shrunk or closed as well. While many residents of North Adams are still deeply religious, the influence of churches in the public sphere has decreased as the community has become more secular. Robin Martin reflected on the reasons for this shift and its impact on community values:

I think that unfortunately for whatever reasons people have moved away from it. And like I say I’m spiritual but not religious. But those aspects of your world…getting up on Sunday morning, going to church with the same group of people. Doing that. We’ve moved away from that as a country. And again I’m very old but I think that everything being open on Sundays is what caused that… Sunday was a family day that always started with church and then the rest of the day was spent with family. You didn’t take off with anyone. And even when our children were little that’s what we did. Even if we weren’t going to church it was a family day. People don’t do that anymore. Everybody does their own thing. We go off. Sunday is just like any other day of the week.