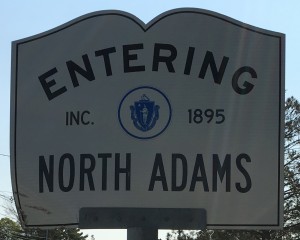 North Adams lives in the imagination of people — it’s future, present and past. Many people assessed the tension between North Adams’ previous identity as an industrial center and it’s new and changing identity as a home for the arts. What became clear through the interviews was North Adams’ enduring sense of place. Sprague might have left North Adams, but the loyalty and persistence of its residents hasn’t changed.

The closing of Sprague really left a gap, but I think that North Adams is starting to get on the right track. They went full-force into putting all their eggs into MASS MoCA and while a lot of people didn’t think or didn’t feel confident that that was ever going to do much for the city, I think it’s slowly starting to show that it is helping. They have a lot of events that go on there that bring thousands of people  into that city. And it’s still kept its… it’s still a small city, you know- and that’s kind of what is nice about it, you know. It is a city, there’s a lot going on, there’s a lot of things happening there now because of MASS MoCA – things are starting to build up little by little, but it’s still small enough that you don’t get lost in it, you know, you really don’t get lost in it.

Steve Melito, who grew up in North Adams and currently lives in Adams, reflects on the future of manufacturing.  Melito remarks that North Adams’ identity is still deeply tied to industry, and he points out the ways in which he sees Sprague’s legacy living on in North Adams and Adams.

As much as people in northern Berkshire would like there to be another big employer, there really isn’t. I’m sure some people went to the hospital maybe to work as custodians or got jobs in the school as custodians, but for the type of low skilled manufacturing labor, those jobs are gone and they’re not just gone in North Adams, they’re gone across the Northeast and the Midwest and they’re not coming back. So that’s been hard with that. I can tell you a couple interesting successor stories that came out of Sprague. There are two companies in Adams right now that have their roots in Sprague. One is Shinewire, they’re in the industrial park and the current owner’s father had worked for Sprague for many years and when Sprague imploded in the eighties he went off and started his own company and kept some people working, but not on the order of magnitude that Sprague itself did. Then there’s another company in the Adam’s industrial park, MRA Technologies and its run by a man whose dad was a Sprague scientist and they do ceramics or maybe even ceramic capacitors, so there are a couple of offshoots that survive but on a much smaller scale and they’re more highly skilled than Sprague itself probably was.

Well, it’s never going to be a manufacturing center. Location’s just not good. It’s difficult to envision it as becoming a tourist center. It’s a little too far…out. And really all it’s got going for it is MASS MoCA. And the Clark. I would hope…that it could grow from MASS MoCA as…an arts community. I can’t imagine it growing it into much, but at least it’s being sustained, as an arts community, and as a low cost pleasant place to live. I really, it’s hard to think of what the future could be.

While others who have rich memories from Sprague see a lot for a future. Lorraine Maloney, lifelong North Adams resident is an example of this.

Well I think North Adams has changed so much from an industrial age. Now it’s art and it is very difficult for older people to accept. Well, industry is never going to come back. You really have to accept, you know, the art and the changes and the things that are gonna come, like MASS MoCA. I mean that brings thousands of people to the area all the time. Let’s see. And they have the [Eclipse] Mill on Union Street, I’ve been in that, where people are all artists and they also live there and they work, their art. I’ve been into the pottery studio up there. It’s just lovely. They have beautiful apartments.  Just like when it was a mill, all brick and everything and then they have the pottery studio you can watch them while they’re working up there on it. So I think people have to learn to accept the city’s changes and they’re never going to bring factories back. There’s not a need for it. So we have to go with what is going to happen. Like I think, North Adams with the [Greylock] Mill here, a lot of people from out of the area are investing in our city right now which I think will help North Adams a lot to grow.  Like this mill down here will eventually be a really wonderful place, you know, for people to be. And they’re talking about building a museum next to the airport over there as well. Tom Krenz who started MASS MoCA. He is going to probably do that. They’re also down at Heritage State Park. They’re looking at doing a huge railroad museum down there on it, I don’t know if you keep track of that, what’s going on. And that should be beautiful over there and they’re going to build more buildings down there and that’ll bring, again, more visitors to the area. We take for granted what is here and the beauty of nature and so forth. People that come from out of the area think that is fantastic. You know, like MASS MoCA has done the big concerts in the summertime over here and all the concerts they’ve brought here they’ve never had any problem with people. It’s been wonderful, wonderful things for the community. Thousands of people come in for Wilco. I think they’re coming here in the summer, but it brings a lot of money into the community. It’s even hard to find a place to stay, the motels, hotels. Like the Redwood Motel when you’re headed back toward Williamstown, that’s bought by some people from Wilco and they’re going to be making, it’ll be all housing down there. And it also might have some bike paths and so forth. And they also bought the Blackinton Mill which is on Mass Avenue and eventually you’ll be able to cross over the river and go over to the Blackinton section over there. That’s going to be really nice for the community over there.

Others still, such as Colleen Taylor identify a changing psychological atmosphere in North Adams.

I think that’s an important part to your community. If you do not have a good education system you’re going to always – you can’t, you can’t swim it’s like a weight on your shoe, you know, holding you back. So I think that that’s going to float up. Now with that happening I think also the idea of Sprague leaving and that wound is going to dissipate as that generation that remembers it goes away. And you are only going to remember MASS MoCA…. Nothing is wrong with North Adams, okay. North Adams is a beautiful community. Yes do they have a few empty stores, that’s everywhere in America. We are coming out of that. I think 2016, 2017, I think you’re going to see those fill in. And it’s not a desolate city. It’s surrounded by beautiful mountains. People just have to re-look at that mirror and see what it looks like inside that mirror and then they’ll feel a little bit better themselves. They’re just holding up a cracked mirror. North Adams is much more beautiful than what they perceive themselves to be. And Mass MoCA is one of those things that’s saying, hey look at us.

North Adams’ future remains unclear. But its residents care deeply and hope that the city – and the people who live here – can thrive.