Nestled in the Berkshires, North Adams is ideally positioned to allow residents easy access to the outdoors. Both city parks and public recreation have been central features of community life in North Adams for many years. Through the changing seasons, residents have found ways to enjoy themselves and spend time with their friends and neighbors by going outside.

Many North Adams residents share fond memories of skiing, sledding, and ice skating in the winter months. We used to go sliding, Lorraine Maloney, lifelong North Adams resident, recalls from her childhood in the 1940s. You know where Brayton School is? The hill that has all the greenery, it used to be all bare and everybody slid there in the winter time, it was the sliding place, you know, whether it was on a cardboard or on a sled or whatever and so we really enjoyed that. 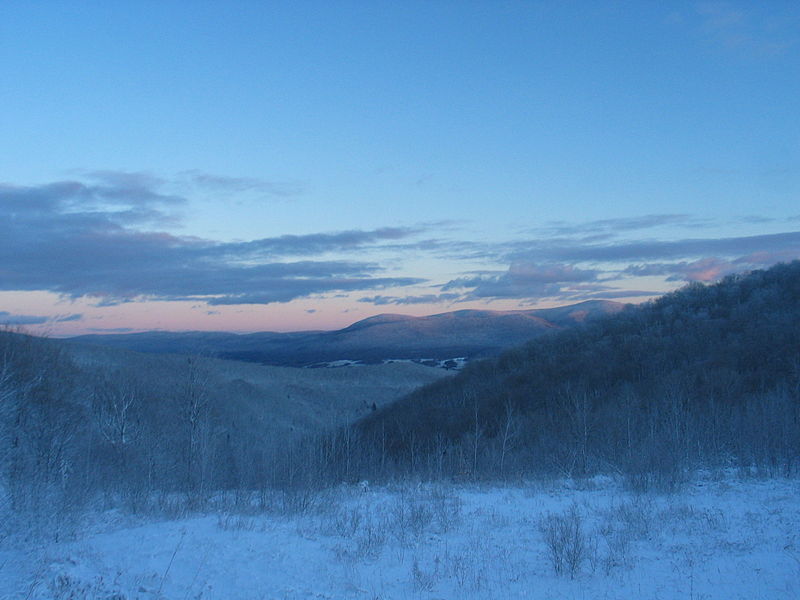 Berkshires in winter, seen from the NY border

Both Maloney and Billy Perenick describe the popularity of ice skating in the city when they were children. According to Perenick:

Volunteers from the neighborhood would shovel off the area and they would have ice skating. North Adams had a public rink down on State Street and the city of North Adams took care of the rink.  They had a small building with a pot-bellied stove in it and they burned wood and they had lights and music and so that was quite interesting. Also we had a pond, a lake, it was called Windsor Pond, on the eastern side of the North Adams and the neighbors in there, they would shovel off so they would have an ice skating rink there.

Perenick also describes going up to ski at Dutch Hill during his childhood in the 1940s:

Dutch Hill was twelve miles away from North Adams.  They put a rope tow in and the dike was the trail that you could ski for beginners and they had a rope tow and in order to get the people up on the hill, they had a Model A engine. Four cylinder, Model A engine, 1930. And they had a heavy-duty, like a log and rope, and you would hold onto the rope and this pulley would take you up on the lower side of the mountain. That was a big thing back then and that was another thing that we skied, I can remember you could ski a half a day for a dollar, from 12:00 til 3:30. Now, I had a Sunday paper route, so I got up early, I delivered my papers, and at that time I don’t know if we had a car, but I would take my skis, my poles, and I would walk down to Main Street and there was a place called the Hub Restaurant. The owner was part owner of Dutch Hill, there were three partners or four partners. You just had to go into that restaurant, there was someone there going to Dutch Hill. So that was a meeting spot, and if you didn’t, you could go on the next street corner and hitchhike, and you would get a ride up, ski a half a day, have yourself a hot chocolate or maybe a hot dog, and come back with someone who would drop you off on the corner and you’d go home.

Outdoor fun wasn’t limited to the wintertime. Many people remember the parks where children gathered to play baseball or fish, but any patch of woods could become a favorite gathering spot. When school let out for the day, Judith Mahar McConnell and other neighborhood children would explore in the woods behind North Street:

The years that I went to grammar school, we were allowed to come home for lunch. We didn’t pack a lunch or anything. We came home for lunch and went back after lunch and were dismissed like at 3 in the afternoon. And we had woods that are up, that we used to explore and think we were Indians or cowboys and there was a huge rock. We called it a giant rock. And years later when I went strolling through the woods, I said, “this is what we called a giant rock? It’s kind of like Plymouth Rock!” So it was a wonderful neighborhood to grow up in. You’d leave, you’d go out in the morning and you wouldn’t come back til lunch time and then you’d go back out after lunch. And in the summer time you’d have to be called in at suppertime or come in to go to bed, we were outside all the time. 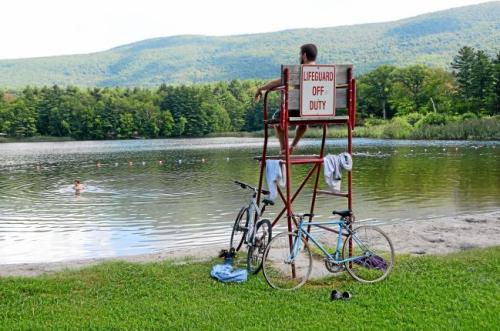 Brooks and ponds on the edges of the city were also popular places to go swimming. Lorraine Maloney describes going to Notch Brook and the Cascades trail on hot summer days in North Adams:

We’d go down there and play in the brook. We’d run down the street. I don’t know why we didn’t wear shoes or anything when we went down. With the tar it was so hot you couldn’t wait to get in the brook over there, but we had lots of fun. We had those big tubes that you played in and so forth down there. Usually in the afternoon most of the kids would gather down there and play. There were a lot of kids my age.

Within the city itself, street games were also commonplace. Steve Melito describes the some of the popular activities from his childhood in the 1970s:

When we played outside, when I was on Franklin Street before sixth grade, we would play tag and kick the can and whiffle ball and Nerf football, kickball. It was great and then over in the west end on Marion Ave it was really more baseball and football, but there were always kids in the neighborhood around and that’s a big change I’ve seen that there’s just not a lot of kids around anymore or else they’re all indoors because everybody’s scared.

For generations, children and adults alike have enjoyed spending time outdoors in and around North Adams. No matter the season, there was always some game to play or some new place to explore.