For generations, neighborhoods helped define the social structure of North Adams. Many neighborhoods represented the waves of immigrants that arrived in the city during the early twentieth century. Settling in areas close to places where they worked, residents soon established places of worship that became anchors of their community. The Italian and French neighborhoods represented two of the largest populations in the city, but throughout the twentieth century, immigrants from across the world formed their own communities in North Adams.

When immigrants first came to North Adams to find work, many settled in neighborhoods with fellow immigrants who shared their language and traditions. Robin Martin speaks of the French Canadian neighborhood that her grandparents’ generation formed, saying: The Canadian French came in together. They found the jobs together. They founded their church together. And the Irish did that and the Italians did that. That’s because those were the people you knew and that’s how you kept your culture. Lorraine Maloney also describes the various communities where French immigrants congregated:

This neighborhood here which is called Greylock, basically, is mostly the French people and people migrated toward this area because they worked at the mill or the mill that’s being converted over here used to be a cotton mill and most of the people from this area worked there. And the other area was up toward the Beaver Street area and that was other mills there and it was a lot of French people that lived in North Adams. The Polish people mostly lived in Adams at the time.

Billy Perenick describes the close-knit Italian community that remembers on the hilly roads near State Street by the Haskins School, close to what is now Western Gateway Heritage State Park:

They had an Italian import store there, he says, and everybody seemed, when they came from the old country, they knew someone and they gradually moved in that particular area to be with their friends. Not too far from there, down on State Street, they had a bocce court set up, so every Sunday, some guy would come down with a cordeen [accordion] and a few people would come off the mountain, they would play bocce all day Sunday. And that was a very skilled game and if you didn’t pay attention, you would hear about it! No fooling around with that! 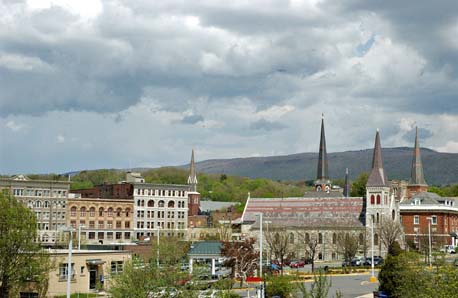 Perenick and Martin share stories that speak to the potential of North Adams’s ethnic neighborhoods to both unite and separate people. Perenick tells stories of his childhood as an Italian-American in a primarily French neighborhood and even shares a story of friendship between his mother and an English woman during World War II.  Italy and Britain were enemies in the war but as Americans in North Adams, residents could ally to help friends and relatives in war-torn Europe:

I can remember going to the post office and my little red cart and I would bring down a bag of used clothes, and my mother would put tea bags and coffee in this big bundle and it had to weigh twenty-one pounds. And at that time, the war in England, we had a lady that lived on our same street, her family came from England, and we had some people in Italy. And I can remember the lady that went to England, my mother would help her pack up a bag of used clothes, tea bags, sugar, anything you could put in there and we would send it to England and Italy, because my mother and father were born in Italy and they came here at a young age and they knew people over there. So therefore I think the young fellows over there probably had a couple of sweaters and jackets from Drury High School, I’m sure they did, and I can remember Houghton School we were championship there, and I’m sure that coat ended up in Italy!

Martin’s story, on the other hand, demonstrates that ethnic neighborhood divisions sometimes led to tensions in the community:

Many residents express a general feeling of community spirit and safety within neighborhoods, however. According to Lorraine Maloney, the neighborhood was a very close-knit place at the time. You know, when you went out, your parents knew that you were safe no matter where you played in the neighborhood.

Though ethnic neighborhoods no longer define community life to such a large extent, the memories linger. More recent generations have mingled or moved into neighborhoods defined more by shared socioeconomic class than by ethnic background, but many residents still recall the streets where children from specific ethnic groups gathered to play or the churches that offered services to immigrants in their native languages to ease their adjustment to life in an unfamiliar place.