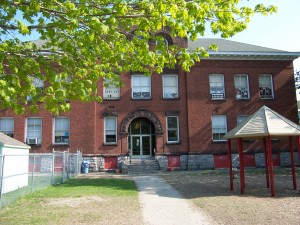 Alongside the public school system, a network of Catholic schools provided education for parishioners’ children. Three Catholic elementary schools including Notre Dame, and Holy Family were run by nuns, each catering primarily to a different ethnic group, such as Irish, or French Canadian. For high school, many Catholic students continued their studies at St. Josephs, the parochial school. A third high school, McCann, only admitted boys.

Beyond their religious focus, the Catholic schools offered a very different experience. Lorraine Maloney remembers the shock she felt when switching into the public school system after attending school at Holy Family.

French school is very different than a public school. Here when you had lunch: quiet, nobody talked. You ate all your lunch and that was it. When you went to high school and it was just such freedom to go up and there and everybody conversed during lunch times over there so it was really a learning experience when I went up there.

Judith McConnell grew up around the corner from Johnson School. All the kids in her neighborhood – and there were many – walked to school, even returning home in the middle of the day for lunch.

McConnell’s positive memories of going to the Johnson School contrasted with stories she heard about her father’s experiences as a student at Notre Dame school. 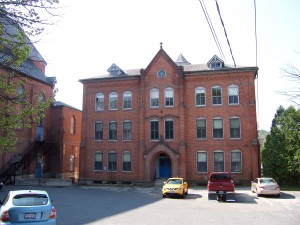 The nuns were, oh my gosh. They wouldn’t get away with what they did in those days… My dad was, of course he didn’t like us kids to know this but my grandmother used to tell us these stories. So he was in class one day and I don’t know if he wasn’t paying attention or he did something and the teacher picked up somebody’s rubber that they wore to school, and threw it at him.

Outside the classroom, schools provided many activities to keep children busy and out of trouble. For boys, school sports facilities and teams filled their time and gave them a way to meet young people from other areas of the city. Billy Perenick remembers that the city had schools on every corner and they were all designed by the same architect, I would say. We had basketball leagues in grammar school, every school, every basketball team, so we got to know the other boys and girls from the different area and that kept us busy. And all these schools also had a little baseball diamond, so we played ball with the schools, made it interesting, and in the wintertime, some of the schools had an ice skating rink.

Justyna Carlson attended Mark Hopkins School. She recalls that the school’s role as a site for teachers training at the State College made a Hopkins’ education special.

Mark Hopkins had been the training school for teachers, training students from the college. We thought it was great. We complained when we were students, but the preparation was phenomenal, because we had had every type of teacher you could have, from the best to the worst. And we’d had every kind of project you could imagine because they had to practice with quizzes and they had to practice with tests and they had to practice with dioramas. There were times when we complained because compared to the other schools in the city we seemed to have an awful lot more work. But it showed once we got to high school, we had done everything before and really had an advantage over the other students. 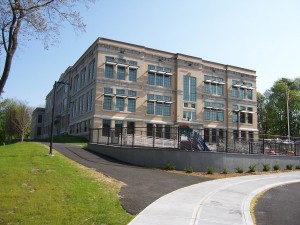 For the many students who did not attend college, Drury offered classes to develop useful working skills. The school also allowed students to begin to gain job experience during the school day. While preparing to be a secretary, McConnell took advantage of many of these opportunities. By the time she graduated from Drury, she was employed already in a busy office at Sprague.

I was in the commercial course, which was secretarial, actually. In our senior year… they would release us at noontime and we could go and work in the areas that we were interested in, to be a secretary or whatever. And in high school I took typing. Originally it was on a manual typewriter and then one year we got electric ones and that was like, whoa! And I did short hand and book keeping and all the stuff that you do for commercial.

Starting in the 1950s and 60s, as more mills began to downsize and close, North Adams Public School system began to shrink as well. Many of the schools had been constructed during North Adams’ population boom at the turn of the century, and the buildings were quickly aging. When asked about the consolidation of schools, Justyna Carlson recalls that

I don’t think it was as noticeable because, as I said, the parochial school graduated 125 a year and they closed in early ‘70s. Let’s say that’s an influx of 75 into the public school once, per class, once they closed. So it wasn’t as noticeable. Same thing with the elementary schools. For a while they were really bursting at the seams and when Notre Dame Elementary closed, the city rented the school building and called it East School Annex because with that school closing there were too many, East School they couldn’t handle them. And Holy Family had an elementary school so there were three Catholic elementary schools and a high school and when all of them closed and they came into the public schools, the numbers didn’t change a lot right away.

However, even though North Adams had its own college with many local students, for the children of many factory families, finding a job after high school was almost a given. Linda Saharczewski remembered that when she graduated from high school in 1975, there were two choices: you either went to work at Sprague or GE in Pittsfield. She never seriously considered college. Similarly, Robin Martin recalled that college never seemed to be an option for her friends or something she was encouraged to consider:

The way we grew up, everyone of my family as far back as I knew had been farmers and then they had come into this country as factory workers.. even though I always did very well in school. And my grandmother would just say to me “I expect good things from you” but the word college never came up. And I remember even being in high school and having the counselor say, “so what about college” and I’d say “what about it?” In my life how would I pay for that? How would I do that? And there was no one those… today we have all kinds of people that sit down about financial aid and all of this… There was no one there to do that. So it just wasn’t… It wasn’t on my radar. Not that it wasn’t something that I always wanted to do but it wasn’t something that I ever thought was possible.

As the city’s population shrank and factory jobs disappeared, the schools had to keep up. One by one many of the neighborhood schools shut down, forcing the students to travel much further to get to class and fracturing many of the close-knit neighborhoods they had served. Today there are only three public elementary schools. Drury High School is still open (albeit in a new location), and McCann, now coeducational, serves as a technical high school for the city.

Over the last century, North Adams’s only college also has changed to meet the shifting needs of its community. In 1960 it expanded its curriculum, becoming North Adams State College. The college’s current iteration, the Massachusetts College of Liberal Arts, mirrors the city’s attempts to reinvent itself as something more than a struggling post-industrial community. MCLA draws students from across the state and even outside the area. Lorraine Maloney, who worked at the college for many years, experienced some of these changes first hand.

It’s a great college… I worked in the education department. The education department was the largest department in the college at that time, but it’s changed a lot now. Teaching isn’t as prominent as it used to be over there… Then I worked in Student Affairs for quite a while and worked in the President’s Office and in the President’s Office we had a turnover during that period of time… I started a program at the time. It was the four Cs, there was Campus Community Coexistence Council. When you live in North Adams, the college is part of an elderly community over there and there is a lot of friction. You know, if you’re 18 to 20 years old you’re partying late at night but if you’re 60, 70, 80 years old you want to go to bed at night… It changed the relationship between the college and the community a lot, over there. And we also started the community cleanup day during the springtime… We’d work with people from the city and we’d go look at the sites that really needed cleaning up. And then we’d bring the students, faculty staff and city people would come and we would clean up the different areas in North Adams. It was fun.

Colleen Taylor, a local business owner considers the college an important part of the city’s culture.