Originally from Italy, Diego has been living in Japan for more than 10 years, and apart from practicing Noh, he also teaches the art form as a professor at Kyoto Sangyo University. He is one of the very few foreigners to have attained the title of shite in the world of Noh theatre. In his lecture, Diego started off by talking about the history of Noh and its definition. We learned that Noh originated in the 14th century, and has since gone through three main stages in the process of its transmission:

With regards to its definition, Noh is often referred to as a total theatre, since it is composed by the amalgamation of different forms of art, like music and art. He also touched on the elements that make up a performance and how each of these elements had an important role. In particular, he mentioned how one can obtain information about the characters through the colors of their costume. Another interesting fact was how performers have the ability to utilize a single mask to portray different emotions, by just changing the angle of their head.

During our trip, we were able to visit and talk to Tatsushige Udaka-san. He was born in Kyoto and started training as a Kokata actor when he was just three years old. Udaka-san was trained by Hinasori Kongo, the 26th head of the Kongo School, and by Michishige Udaka, his father. He has performed and has given lectures about Noh Theater in Japan, South Korea, the U.S. and France.

He is a shite performer, meaning he primarily performs main character roles. He began the talk by demonstrating how movements in Western theater and Noh are different; Western theater has the performer move their entire body, but in Noh, performers remain upright and make smaller movements, due to the restricting nature of the heavy costume. Throughout the talk, Udaka-san emphasized how integral masks are to Noh itself; Steve and Eduardo had the chance to try wearing Noh masks and walking like Noh performers. Udaka-san explained that there is a very careful, deliberate process to putting on and taking off the mask, as it is weak to touch and water. Moreover, different angles and shadows affect the various emotions portrayed by the mask; keeping a straight face maintains a happy disposition, while lowering the face (and body) causes the mask to look sad. Udaka-san demonstrated this by performing several Noh chants while wearing the masks. Finally, he described how the conflict inherent in binary oppositions fuels the engaging nature of Noh; to him, Noh is uninteresting without tension. 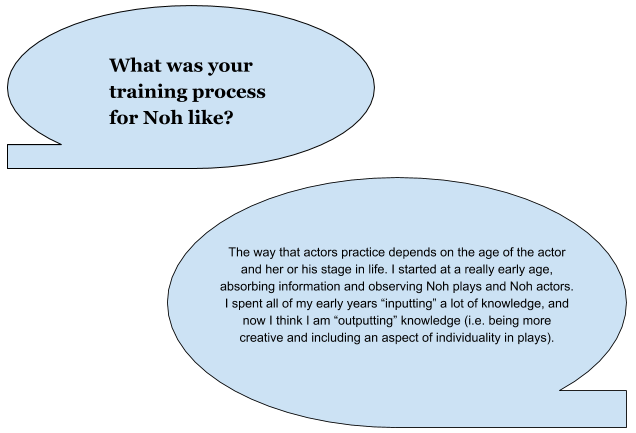 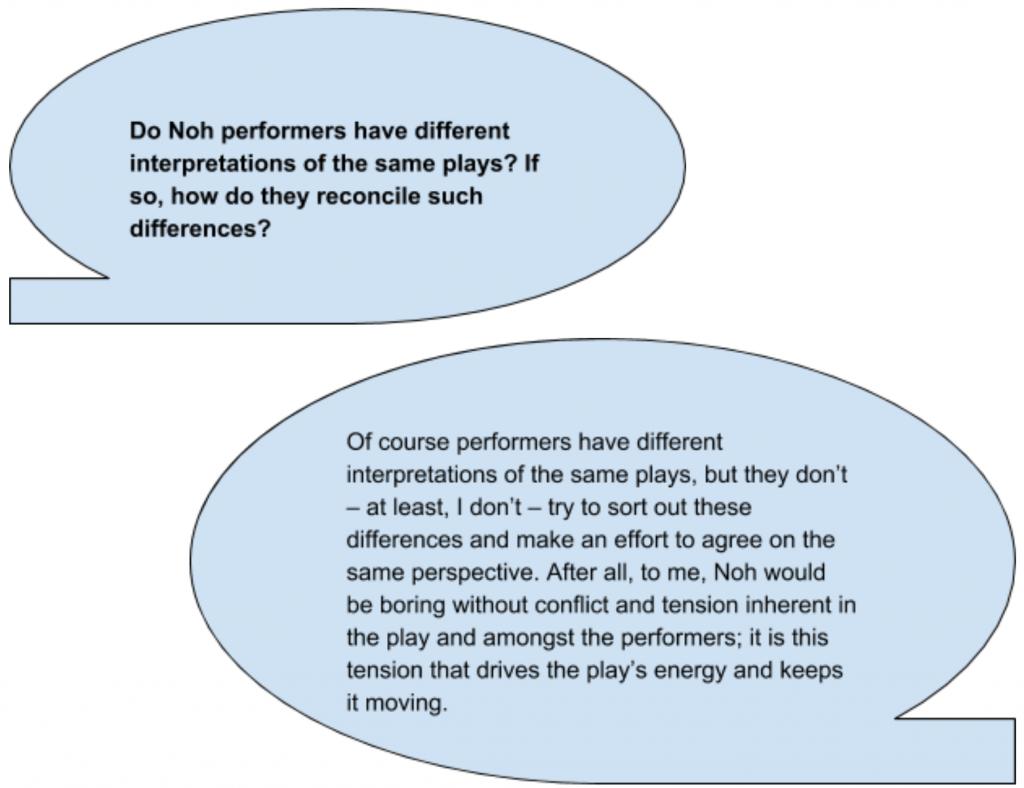 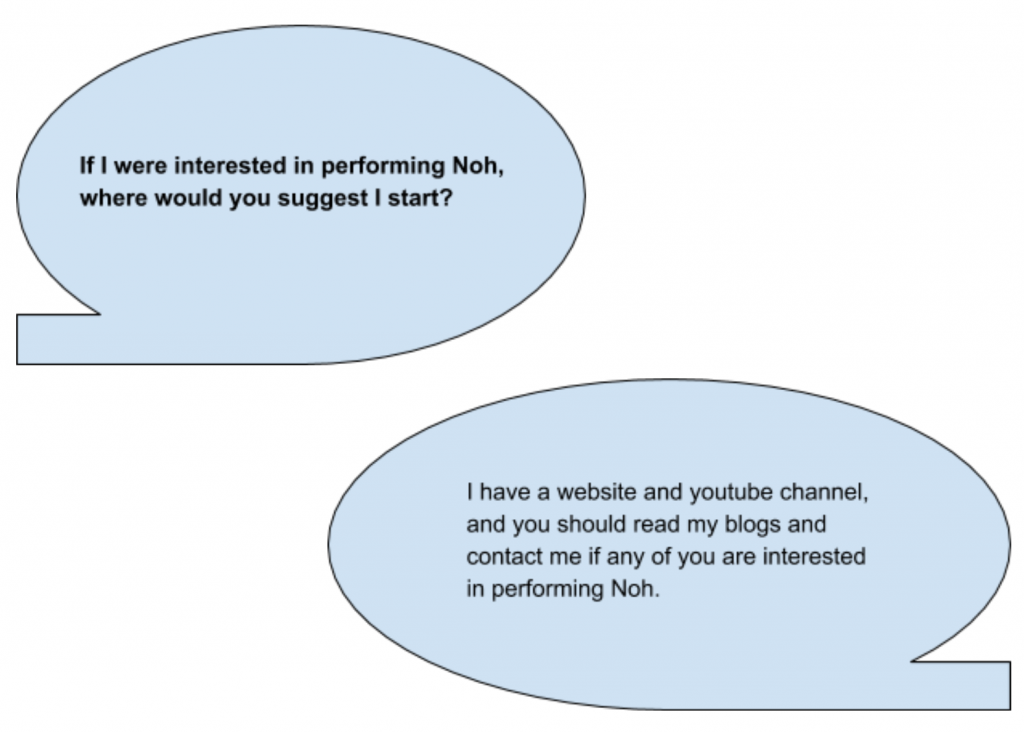 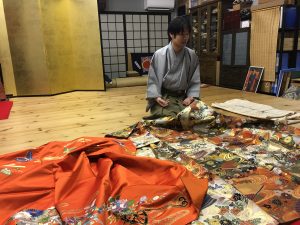 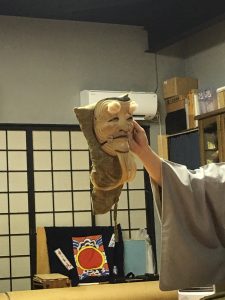 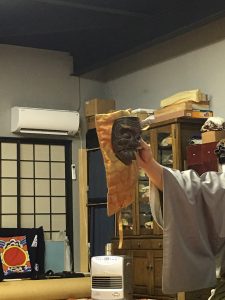 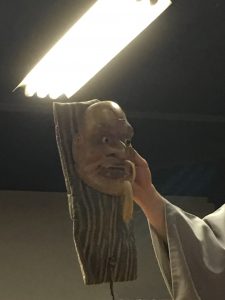 The Noh masks represent the ancient tradition that has been upheld for hundreds of years. The same masks are used but the “eyes” of the masks change. In other words, as younger generations become more involved in Noh, the acting and perspective change. Through our different experiences during the past few days, we realized that tradition (i.e. the masks, costumes, chants, plot) needs to be prevalent in the modern world and among younger generations in order to preserve culture. Though the whole point of Noh is to use a lot of imagination and enjoy the whole experience, the slow plot progression and simplicity may still be uninteresting to some. In the future, we predict that more Noh actors will mix in some of their own creativity and improvise on stage. If the movements and chants are less “calculated,” this may introduce more creative aspects, and more people may become interested in Noh. Additionally, Udaka-san has a website and youtube channel, and he invited us to read his blogs and contact him if any of us are interested in performing Noh. People like him are utilizing social media to promote Noh to the younger generation.

From the viewpoint of the present world, it seems that there is no mind to convey feelings to people, but it seems to give up, but that is quite the opposite. Noh is minimalistic, but everything on stage is there for a reason; the minimal scenography and sparse action is all necessary. Audience members must be gripped into the narrative or else they lose the poetic stage art. The mood Noh performers create exemplifies kotoagesezu. Alienation techniques used in Noh convey emotions unparalleled to any other performance art. The emphasis on narration rather than action provides an allusive mood which severs the audience from reality. Without each and every technique used by Noh performers, the plays would never be as powerful. There is tension in each choreographed moment, and such delivery cannot be achieved if not for the koto-age sezu manner of rejecting collective rehearsals. The Noh plays are not rehearsed, just as real life is not rehearsed.

There is no doubt that ichi-go ichi-e is an essential part of Noh theatre. Unlike other forms of theatre, Noh performers get only one chance to practice together before performing the actual show. Given the fact that Noh heavily relies on the audience’s imagination, and that the plays are usually performed only once, it is upon the performers to ensure that they utilize their time on the stage as much as possible. My ultimate experience of ichi-go ichi-e was without doubt the opportunity to experience what it is like to be a Noh performer, by wearing one of the mask. Similarly, we should learn to appreciate and cherish each moment we encounter in our lives with the people around us.

The art of Noh lies in the beautiful masks, ornate costumes, powerful chanting and music, and the imagination of the audience. The movements and plots are very simple and slow. Thus, the play cannot be complete without imagination. As you can see in the video, Udaka-san showed us how he can use one fan to depict a sword, a shield, and sake.

Additionally, Udaka-san and Diego-san taught us that the performance is dependent on all actors and musicians and their compatibility; Noh is not solely dependent on his performance. Thus, the play is not complete without this calculated interaction. Udaka-san also mentioned that Noh would be boring without conflict and tension inherent in the play and amongst the performers; it is this tension that drives the play’s energy and keeps it moving.

Noh performers generally come from a family of performers, which further illustrates how noh theatre manifests itself in the community. Considering Udaka-san’s family as an example, his father was a Noh performer, and his sister is involved in making Noh masks.

Trying on the mask

One of the peak moments of this trip for me, was when I got the chance to try on a mask that is used in performances. This was a once in a lifetime opportunity that I would have never come across if I did not take this course. The masks are delicate and a certain procedure has to be adhered to when wearing them. There are two holes, one on each side, through which the strings go through. The masks have to be held from the holes, to avoid touching the face of the mask since the paint in delicate. One is also required to bow to the mask before and after wearing it, as a sign of respect. 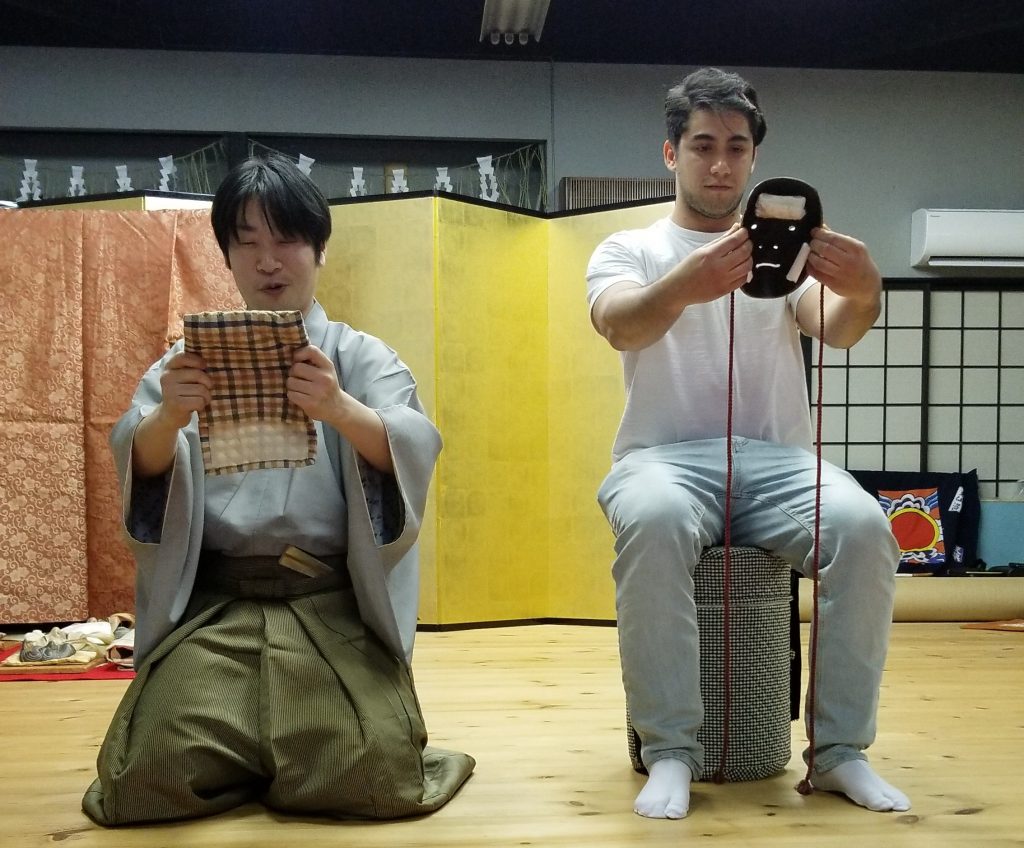 Once I put on the mask, I felt as if I had more control over the audience to a certain extent. I think this feeling stemmed from the fact that my real facial expressions were hidden behind the mask, and the audience could only see what I wanted them to see depending on how I tilted the mask. 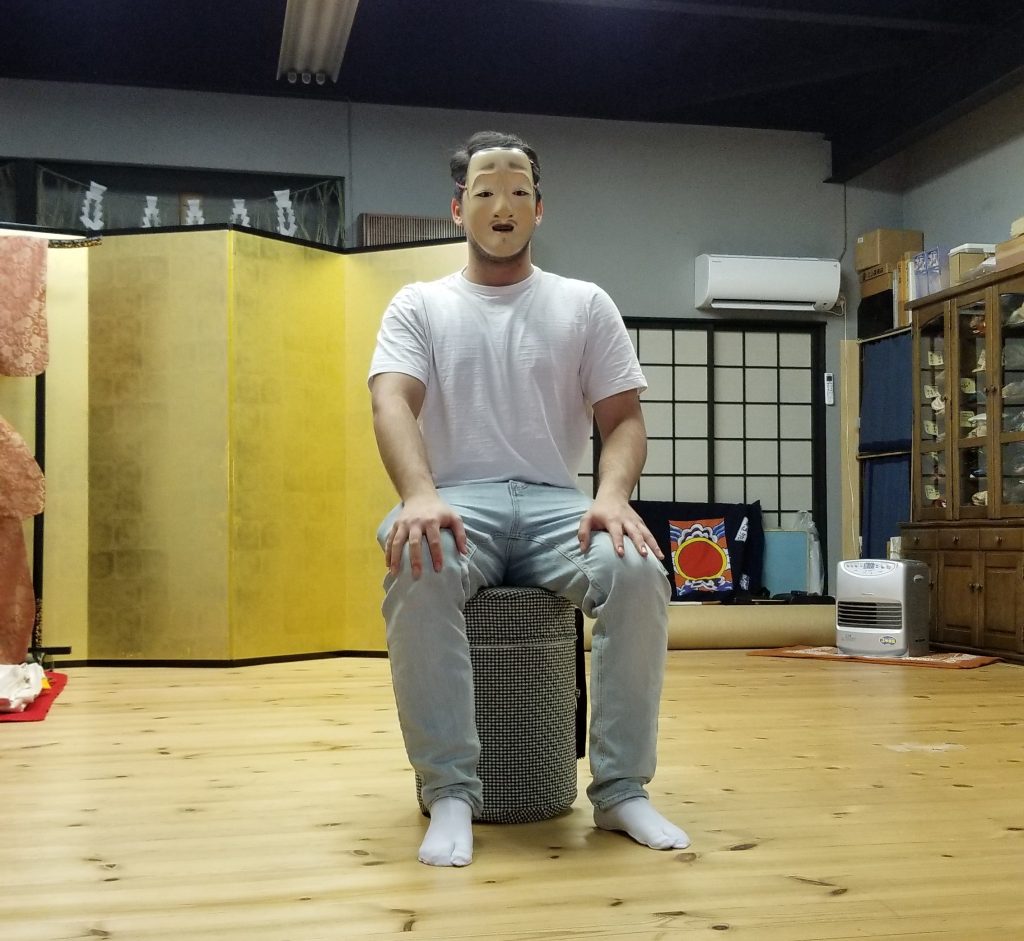 My vision was greatly limited while I was wearing the mask. If I were to walk around, I would not have been able to see where my feet step next, and while looking straight into the audience, I was only able to see at most two people at a time. Noh performers usually make that have been carefully calculated, and part of this is due to the limited vision they have during a performance. 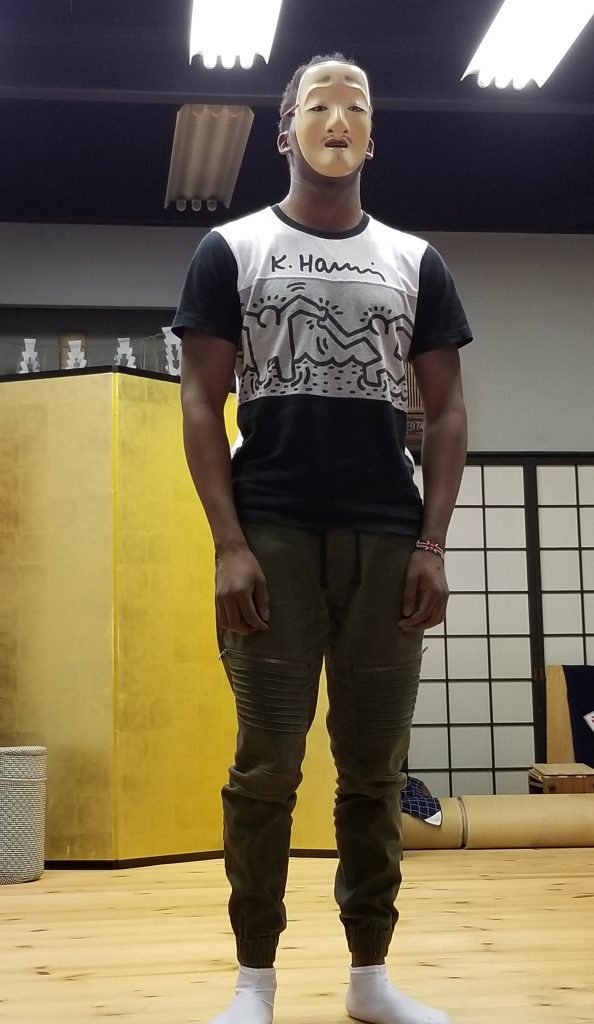 All of us were able to experience a Noh performance. Though we had a script and a plot synopsis, we had to imagine what the dances and chants were trying to portray because many things were not shown on stage. However, this was our first exposure to Noh, and we were busy connecting the script to the scenes of the play. I tried my best to imagine what the actors were feeling as they danced and sang to portray deities and characters on stage. During some scenes, I closed my eyes to absorb the rhythm of the music and articulation of the chanting.  As I opened my eyes again, I was overwhelmed by the richness in color and art on stage, and it was as if all of my sensory neurons for hearing and vision were agglomerating into one. I wish that I were able to “imagine” more of what was not shown, but I realized that most people need practice to fully immerse in the play. The next time we attend (or if we ever have a chance to attend) a performance, I believe we will be able to imagine more “hidden” aspects.