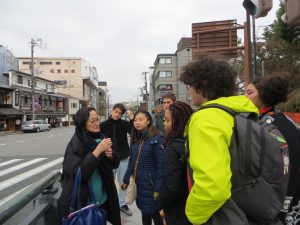 The day after we arrived in Kyoto, we were on the move. Our first stop of the trip was to a company called “Kaji Kinran” that specialized in making Japanese textiles with gold thread. 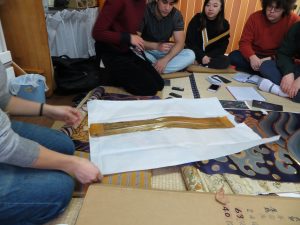 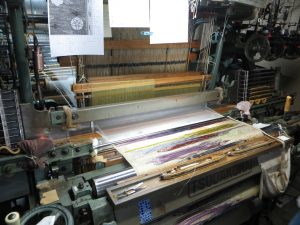 This^ gold thread is used when Sakai-san and the weavers at Kaji Kinran make the kinran textile. These are often in the forms of banners for Buddhist temples or robes for monks and priests. To the right is one of the weaving machines used by the aging master artisans at Kaji Kinran. 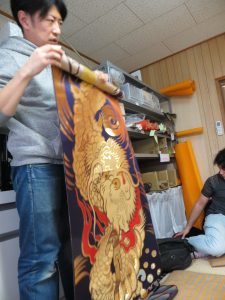 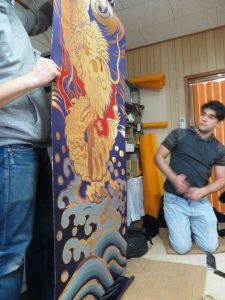 Above is one such banner. Everyone in the room let out a “WHOOOAAAA” when Sakai-san unveiled this kinran dragon. Each bolt varies in how long it takes to make and how much it costs, but from just looking at how they are made, you can tell that neither is low. 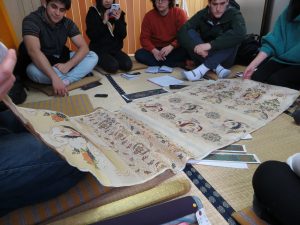 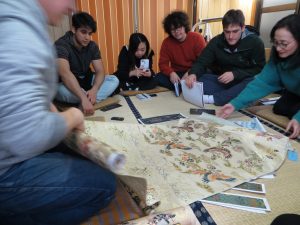 Sakai-san also showed us some of the other kinds of Buddhist patterns they often use in their weavings. This bolt was specifically printed to be a sample, showcasing a dizzying number of designs of varying complexities.

Sakai-san did not originally set out to work with Kinran, yet he seems like the perfect man for the job. He was an architect until he began work at Kaji Kinran through his father in law. Kaji Kinran was on the verge of closing, but Sakai-san and the other craftsmen have kept it alive and running.

All but two employees at Kaji Kinran are in their seventies and eighties. Sakai-san is picking up how to fix the mechanical looms as well as specific techniques unique to each of the master craftsmen. He has reached out to other textile makers and is hoping to find strength in the relations between artisans. Trying something new, Kaji Kinran has also begun production of prayer mats. Sakai-san is a forward thinker who is capable of leading the centuries old tradition of kinran into the modern age and beyond.

From him and this visit, I not only learned about the traditional art of kinran,  but also about responsibility. Because Sakai-san left his original job as an architect to come lead at Kaji Kinran, the weavers could keep their jobs. He is thinking up new ways to stay relevant in today’s world, not for personal gain, but for the success and wellbeing of all who depend upon him. The world would be a better place if we had more Sakai-sans around.