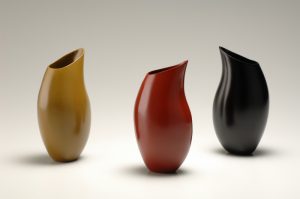 On our last day of visiting artisans, we first met Keikou Nishimura. Nishimura-san is a 3rd-generation urushi painter and his studio specializes in tea ceremony instruments. His studio consists of many items used for generations such as the wooden desk he works at and the humidity controlled closet where urushi layers set in between stages of painting. Even though a certain design (rice bowl, natsume, etc.) may be repeated, no two pieces can be exactly the same. Each piece of wood and the urushi used is unique. Nishimura-san describe how he has to communicate with the wood to bring out the shape instead of forcing into what he wants. We learned that creating urushiware is a time-intensive process that requires a lot of patience but, the result is beautiful. While the natsume and rice bowl are aesthetically pleasing, their beauty also lies in their functionality. 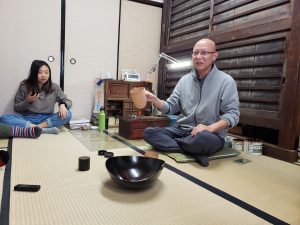 To start, Nishimura-san showed us a thin wooden base, made by a wood-turner, on which he applies urushi. For example, this base was paper-like at .3 mm thin. 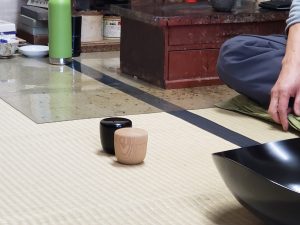 Nishimura-san showed us the process of making natsume, a traditional tea holder. This was super cool because we got to see the before and after. The wooden base was super thin but the thickness of the entire piece doubled after the urushi was painted on. 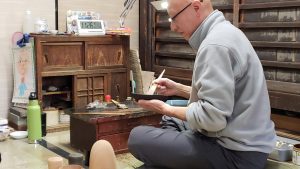 He demonstrated how he applies an intermediate clay layer to a bowl that he is working on. He uses a spatula and manipulates the lay directly on his desk. He then uses wet-stone to smooth the surface. 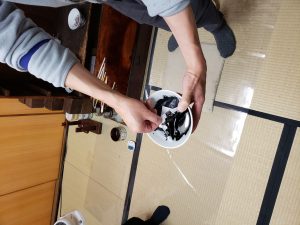 In the next room, we saw where he keeps different kinds of urushi to paint with. There were different colors and finishes that each produce different looks. They had to be kept in a room at a certain temperature so that they would not harden or break down and become unusable. 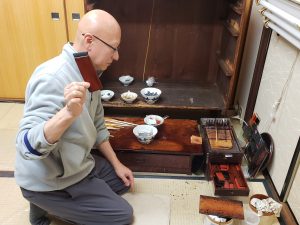 Brushes used to apply urushi are traditionally made with long, Japanese women’s hair (although now hair is sourced from China) because it is the perfect stiffness for application and brushes can be used for a long time. Nishimura-san still has one used by his grandfather. 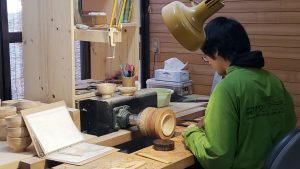 As Nishimura-san noted, the number of artisans who specialize in a specific skill, like wood-carving, is decreasing, as the many artisans in Kyoto with knowledge of traditions are in their seventies and eighties. In response, Nishimura-san hired a young woodcarver, who we met downstairs, after unsuccessfully attempting to convince an elder woodcarver to hire apprentices of his own. Moreover, he explained to us that Kyoto art universities usually recommend a few talented students as potential apprentices to artisan studios. We found it impressive that Nishimura and his wife worked hard to get woodturner master to take artisans and actually fund them in order to preserve skill and tradition.

Below are some photos of his work from his website: http://www.keikou.jp/index-en.html 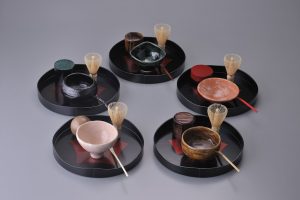 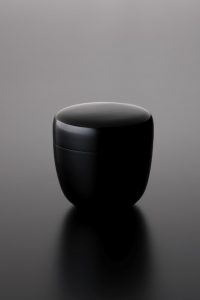 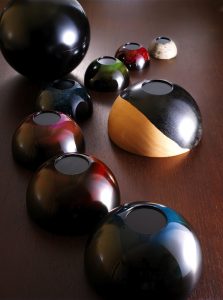 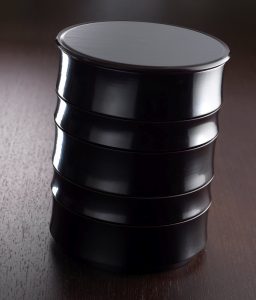