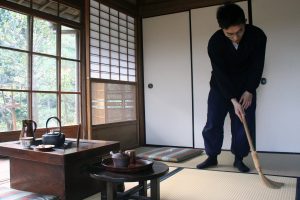 In ancient times, many tea masters and practitioners were samurai. The practice of tea provided them with a peaceful retreat of the violent reality in which they lived. In the modern world, the practice of tea has subsisted prominently among people who have stressful jobs, who find it as a retreat for peace of mind and isolation form the copious amounts of information with which we are often bombarded by society. 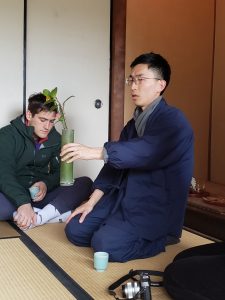 Soon after entering the tearoom, Dairiku-san talked about a flower growing in a bamboo stalk in the corner of the room. With only two buds, the plant, less than flamboyant, captures the simplicity essential to the zen practice. Additionally, the beauty of the buds is found in its yet undeveloped state, symbolizing the many possibilities it has in the future. In this way, the plant is placed in an elevated place in the room where it can be appreciated by the participants of the ceremony. 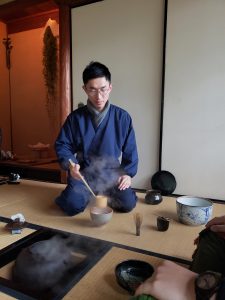 The simplicity characteristic of the zen practice is not only present in the minimalism of the space and the elements in it, but also in the mind set of the tea master and their guests. Dairiku-san explained how, spending time in the peaceful haven that is the tearoom, he learned to appreciate the steam that come off the pot, swirling in ever-changing patterns. Appreciation of such simple things is closely related to the simple life style proposed by zen, as well as understanding of one’s fulfillment base-level. 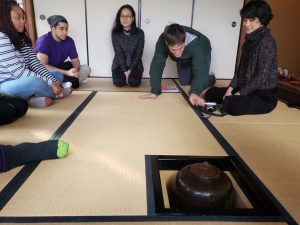 Ichi-go ichi-e is very much at the core of tea ceremony. As we heard from Dairiku-san, for samurai who could go off to battle anytime, tea ceremony allowed them to take a break from the outside world. Tea ceremony puts emphasis son every move and ritualizes every step, from how to boil the water to how to drink the tea. So, each part is meaningful and causes one cherish each moment; in the samurai’s case, for instance, any cup of tea could be your last. The meeting between us and Dairiku-san was unique as it will not happen again at the same time, in the same way, and with the same people. That was the only time he would serve tea to us and the only time for us to receive tea from him. We learned the importance of living in and cherishing small moments, like looking into the tea bowl when drinking or eating the wagashi. In a busy world where we rush from one thing to the next, it is important to slow down and appreciate the small things. Not only is it humbling, but it allows you to live in the moment, calm your mind, and appreciate what you have. 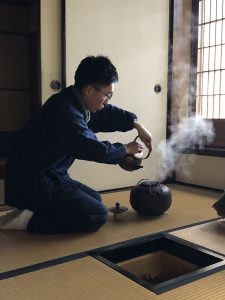 When introducing us to the zen practices that are so deeply intertwined with Tea Ceremony, Dairiku-san started as follows. “If had a view-point from the outside of the galaxy, and we could tell were you and I are standing, they would look like the exact same point in space. As we inhabit this tiny place in the universe altogether, our existence becomes interdependent with one another. Put this way, my benefit is your benefit and vice versa”. I personally found his explanation very compelling, and it made me think more critically about the individualism so deeply ingrained in American culture.