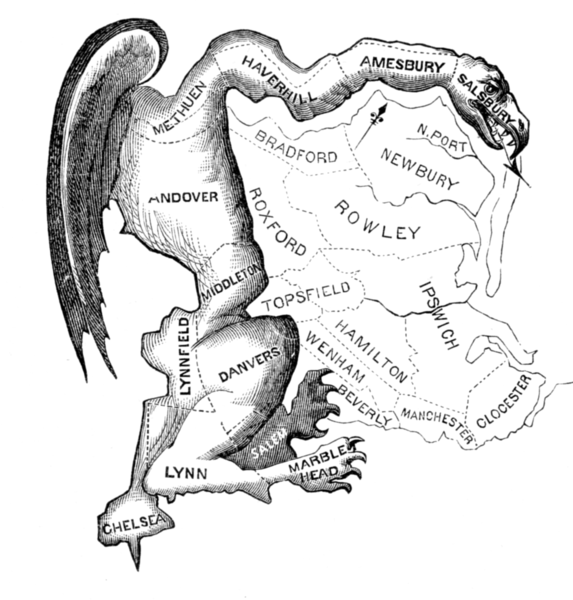 Gerrymandering is an interesting use of maps to political ends.  I remember reading about how computers have really changed this, allowing for much more precise (and ludicrous) redistricting in the last two censuses (2000 and 2010) that can target political maps on a per-household basis.

The following article on redistricting in the 2010 Census is a good overview; definitely click-through to the original article for good illustrations and links — the website referenced provides amazing examples of gerrymandering today.

When a state gains population it may also gain a new congressional representative. Frequently this causes the state to redraw its congressional district boundaries. Since 2010 is a Census year, states that gain or lose a representative will be going through the redistricting process. Therefore this is a good time to look into gerrymandering.

A district is gerrymandered if its geographic boundaries are re-drawn to accomplish some political goal. Each state has its own method of deciding on the boundaries of district lines and some states may not make their deliberations public.

Thus the first task of determining which (if any) districts are gerrymandered is to look at the shape of the district. But examining all 435 congressional districts in the US is a daunting task. And redistricting isn’t restricted to national politics. State and local governments frequently have legislative bodies similar to the US House whereby legislators represent a region in a state, or a neighborhood in a large city. The task of examining these national and local districts is even more daunting. Fortunately computers, math and visualization can be pressed into service to aid in the search.

A website called RedistrictingTheNation.com is a superb resource for people wanting to know more about individual districts. Many of the images in this article come from their website. They track each district by 4 mathematical scores designed to identify oddly shaped areas. The details of these scores aren’t important (but detail is provided at the end of this article). What is important to note is that while none are perfect, they all are good enough to highlight potential problem areas. All gerrymandered districts have poor scores, but some egregious examples only score moderately poor. And some of the worst offenders are false positives, appearing to be gerrymandered merely because they follow a river, coastline, mountain range or state boundary.

Furthermore some may have been gerrymandered for legitimate political reasons. Arizona district 2 is this shape mainly to address possible conflict of interest issues between neighboring Indian tribes. The point is that the algorithms work best when viewed as a hint that something may be amiss. If the algorithms indicate an issue then further study is warranted.

While RedistrictingTheNation has some excellent quantitative analysis on each district, those analyses are primarily numerical and focused only on the district at hand. Another excellent site that tracks broader governmental issues is GovTrack.us. When you pull up a state’s page on GovTrack you can see at a glance all the congressional districts for that state. This provides some context to the districts. For example, one thing that’s a little easier to determine from GovTrack is the party affiliation of neighboring districts. Illinois’ 4th district is democratic. It is bordered above, below and in the middle by IL-05, IL-03 and IL-07 respectively all of which are democratic too. Wikipedia conjectures that IL-04 follows ethnic boundaries even if the surrounding districts are all of the same political party.

The concern over gerrymandering has a growing movement. There’s an online game and a movie in the works. The visual appeal of oddly shaped congressional districts is so powerful it’s hard to imagine this story being told without infographics of the type seen on RedistrictingTheNation.com or GovTrack.us. This bodes well for my New-Years wish list, gerrymandering may be the first main stream news story told with a significant contribution from infographics. However, info graphics alone lack a personal touch. We’ll try to provide that next week.

via Gerrymandering and the 2010 Census | News With Numbers.