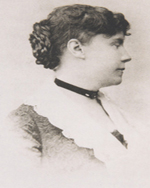 WOOLSON, CONSTANCE FENIMORE (1840-1894). One of the first American realists, Constance Fenimore Woolson began her career writing about the Great Lakes, including an early story, “Margaret Morris” (1872), which is the first shipwreck fiction of the Lakes. She set more than a dozen stories on islands or in frontier settlements, most featuring strong women characters whose facility with small boats and bravery in the face of gales served as inspiration for her readers as well as for herself. Miss Jonah of “Ballast Island” (1873) is the first description of a woman lighthouse keeper in Lakes fiction and the model for many of Woolson’s later protagonists: strong, lonely women who draw their strength from the wildness of the maritime landscape and the promontories or islands where they make their homes.

With local-color writing becoming popular in eastern magazines at the time, Woolson delineated many other regional types in her work: missionaries, teachers, explorers, mixed-blood natives, and military personnel at Fort Mackinac. Seven of her Lake stories were collected in Castle Nowhere: Lake-Country Sketches (1875), a volume that explores the “false lights” not only of the shipwrecker of the tide story, but of religion and society as well. Her 1882 novel Anne became a national best-seller that inspired sentimental pilgrimages to Mackinac Island for decades.

When Woolson left the Lakes in the late 1870s, she moved to Florida and became one of the first authors on the post-Reconstruction South; the remainder of her career was spent in Europe.