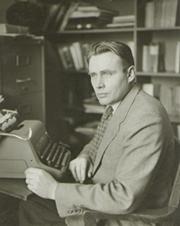 WILSON, SLOAN (1920-2003). Sloan Wilson was a Coast Guard officer before he became a novelist and a yachtsman before he gained a commission in the Coast Guard. He came to regard his Coast Guard experience as more educative than his B.A. from Harvard; the latter two of the three novels that he based on this seagoing service rival in quality his better-known novels, The Man in the the Grey Flannel Suit (1955) and A Summer Place (1958).

In early 1942 Wilson merely had to pass an examination to get a commission; consequently, upon his first reporting aboard the Coast Guard cutter Tampa, the ship’s executive officer ridiculed his lack of experience. But after several months escorting convoys on the Greenland Patrol, Wilson was proficient enough to command the small trawler Nogak, which was engaged in the same kind of work. He would base the novel Ice Brothers (1979) upon this arduous service. Later, Wilson skippered an army supply ship from Long Beach to various ports in the South Pacific, a cruise that supplied the basis for his first novel, Voyage to Somewhere (1947). Contracting pneumonia, Wilson had to relinquish this ship, but later he was given command of a gasoline tanker. He wrote Pacific Interlude (1982), his most directly autobiographical novel, about this experience.

All these novels manifest authenticity in their descriptions of naval and seagoing trials. Readers of Pacific Interlude, for example, participate fully in the fear of their gasoline tanker being blown literally to bits by a stray spark or bullet and understand the disintegrative effect this fear has on the ship’s young officers and green crew. Wilson saved some of his most compelling descriptions of his formative Coast Guard days for his 1978 autobiography, What Shall We Wear to This Party?, some eighty pages of which describe his exhausting initiation aboard small ships in the ice, cold, and storms of the North Atlantic.