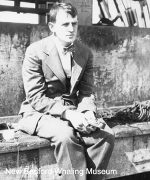 CLIFFORD WARREN ASHLEY (1881-1947). Born in New Bedford, Massachusetts, in 1881, Ashley enjoyed a successful career as a maritime artist and historian of the American whaling industry. His work romanticized New England’s whaling past as the region rapidly industrialized in the early twentieth century.

During his childhood, Ashley witnessed the decline of the whaling trade in New Bedford. He graduated from New Bedford High School and then studied art at the Eric Pape School in Boston and under the tutelage of George Loftus Noyes in Annisquam, Massachusetts, and of Howard Pyle in Wilmington, Delaware, and Chadds Ford, Pennsylvania. Ashley secured early work as an illustrator for popular magazines including Leslie’s Monthly Magazine and McClure’s. In 1904 he joined a six-week whaling voyage aboard the bark Sunbeam, which he chronicled in an illustrated story for Harper’s Monthly Magazine titled “The Blubber Hunters.” While continuing to work as a commercial illustrator, Ashley turned primarily to painting in the 1910s. His canvases employed a brisk, impressionistic style to capture marine subjects including the New Bedford waterfront, old whaling barques, and whaling craft practices such as sail-making and coopering. Exhibitions of Ashley’s art were held in his lifetime at the Jonathan Bourne Whaling Museum (now the New Bedford Whaling Museum), the New Bedford Art Club, the Guild of Boston Artists at Copley Gallery, the Doll and Richards Gallery in Boston, and the Wilmington Society of the Fine Arts.

Ashley contributed several books to the history of whaling. In 1926 he published The Yankee Whaler, a glowing history of the trade that attempted to rehabilitate the moral status of whalemen, who were much maligned by prior authors. The book emphasized the whalemen’s masculine heroism and the social harmony of New Bedford during whaling’s heyday. It contrasted the glorious past of the Yankee whalemen with factory life in twentieth-century New Bedford, betraying Ashley’s anxieties about the encroachments of industry and immigration. The Yankee Whaler was also one of the first texts to celebrate sailor’s arts such as scrimshaw. In 1929 Ashley published Whaleships of New Bedford, containing sixty plates from original pen-and-ink drawings by the author. He illustrated She Blows! And Sparm at That! (1922) by William John Hopkins and Harpoon: The Story of a Whaling Voyage (1935) by Foster Rhea Dulles.

Today Ashley is best known as an expert knot-tyer and the author and illustrator of The Ashley Book of Knots (1944). A comprehensive guide to the art of knot-tying, The Ashley Book of Knots catalogued nearly 4,000 decorative and occupational knots, including many designs for sailor’s knots that were in danger of disappearing as seafaring waned. The Ashley Book of Knots remains beloved by hobbyists for its cheerful tone, rich illustrations, and practical information on the uses of each knot. It inspired E. Annie Proulx’s writing of The Shipping News (1993) and provided epigraphs for many of the novel’s chapters.

Less well known is Ashley’s pioneering work as an exhibition designer. Ashley performed the general planning for a series of replicas of old-time whaling shops, primarily artisan workshops, which were installed in the Jonathan Bourne Whaling Museum in 1923. These shops were among the earliest period rooms in any American museum.

Ashley was also an avid collector of whaling crafts. His personal collection of scrimshaw was exhibited at the Brooklyn Museum in 1919. His personal knot collection was gifted to the New Bedford Whaling Museum in 2016 and displayed there in an exhibit entitled “Thou Shalt Knot: Clifford W. Ashley” (July 2017 – May 1, 2019).

This entry was posted in A and tagged 20th Century, Atlantic Ocean, Immigration, Merchant Marine, Multimedia/Multimodal, Whaling/Sealing. Bookmark the permalink.