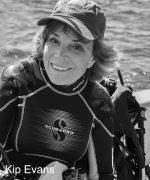 EARLE, SYLVIA ALICE. (1935-  ). Marine biologist, ocean conservationist, underwater explorer, and author Sylvia Earle wrote in The World is Blue: How Our Fate and the Ocean’s Are One (2009): “Even if you never have the chance to see or touch the ocean, the ocean touches you with every breath you take, every drop of water you drink, every bite you consume. Everyone, everywhere is inextricably connected to and utterly dependent upon the existence of the sea.”

Born on August 30, 1935 in Gibbstown, New Jersey, Earle credits being knocked off her feet by a wave on the New Jersey shore at the age of three for inspiring her fascination with the ocean and her interest in biology. Earle began her scientific studies as a young girl. She collected tadpoles from a pond on her family farm, recording her observations in a journal. By the time she was sixteen, prior to the invention of SCUBA, Earle clamped on a diving helmet and accomplished her first dive. Since then, she has logged over 7,000 hours underwater. Earle earned a bachelor’s degree in marine botany (focusing on algae) from Florida State University (1955) and continued her coursework at Duke University where she earned a master’s degree (1956). Before completing a doctorate (1966) for cataloging the distribution and ecology of algae along the Gulf of Mexico, Earle became the only woman to accompany a group of scientists aboard the Anton Bruun (1964) for a six-week expedition sponsored by the National Science Foundation to explore undersea life in the Indian Ocean. Earle continued to advance the knowledge of ocean species, and in 1969 she discovered a new red alga which she named Hummbrella hydra.

Earle is credited with many “firsts” as a scientist, woman, and ambassador advocating to protect the biodiversity of oceans. In 1970, Earle led the NASA sponsored Tektite II, Mission 6 project, comprised of an all-female research team living fifty feet below the ocean surface for a period of two weeks. In 1979, she set the record for the deepest untethered walk on the ocean floor, descending 1,250 feet wearing a pressure resistant dive suit nicknamed “Jim.” In the years since, The New Yorker anointed Earle with the moniker “Her Deepness” (1989); Time magazine named her the first “Hero for the Planet” (1998); and the Library of Congress called her a “Living Legend” (2000). Her advocacy for the ocean earned her a position as the first woman Chief Scientist for the National Oceanic and Atmospheric Association (1990-1992) where she was fondly known as the “Sturgeon General” and later an Explorer in Residence for the National Geographic Society (1999).

In addition to over 200 scientific papers, Earle wrote popular books celebrating the ocean’s role as the “blue heart” of the planet. Her first book Exploring the Deep Frontier: The Adventure of Man in the Sea (1980) commemorates the history of underwater exploration and its contributions to our knowledge of the diversity of species and their interactions. In Sea Change: A Message of the Oceans (1995) Earle takes her audience on a journey to witness the impact of oil spills, whaling stations, fish markets, and toxic waste sites to illustrate the interconnectedness of all life and the need to establish worldwide marine sanctuaries. In The World is Blue, Earle champions protection of global ecosystems centered around the world’s oceans. Here she writes about the galaxy of creatures shaping the nature of life on Earth. In Blue Hope: Exploring and Caring for Earth’s Magnificent Ocean (2014), Earle chronicles the milestones of her life as an underwater explorer and includes photographs that tell a story of the ocean’s marvelous contours and creatures.

In 2009, Earle shared her experiences as a scientist in a TED Talk presentation “My Wish: Protect Our Oceans” for which she won the Ted Talk prize. In a 2012 essay, “Mission Blue: Protect and Restore the Ocean, Earth’s Blue Heart,” which would lend its name to an Emmy award-winning documentary of the same name (2014) and her non-profit organization, Earle teaches to appreciate the ocean through a biological and poetic lens, stating that “the water, the green, the blue keep us alive.” The Mission Blue/Sylvia Earle Alliance promotes ocean preservation through the creation of marine sanctuaries known as Hope Spots. Earle also appeared in the documentary Sea of Hope (2017), where she advocates for public custodianship for the oceans and the need for establishing “Blue Parks.”

Earle joins scientist and popular author Carl Safina in calling for a “sea ethic” that respects the ocean and the life forms dependent upon its health. For Earle, the ocean is life’s elemental building block. She writes in Sea Change: “Our origins are there, reflected in the briny solution coursing through our veins and in the underlying chemistry that links us to all other life.”

Exploring the Deep Frontier: The Adventure of Man in the Sea (1980)

“The Sweet Spot in Time: Why the Ocean Matters to Everyone, Everywhere” (2012)

“Women Are Needed to Solve the Ocean’s Biggest Problem: Ignorance” (2016)

Sylvia Earle’s dissertation, “Phaeophyta of the Eastern Gulf of Mexico”  (1968)