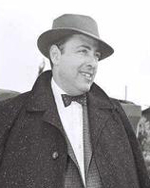 WOUK, HERMAN (1915-2019). Herman Wouk, author of the best-selling sea novel The Caine Mutiny (1951) and other works about the navy in World War II, was born in New York City, eldest son of Russian Jewish immigrants. Educated at Columbia University, Wouk spent the years before World War II working in the entertainment industry and trying to write for the stage. After the Japanese attacked Pearl Harbor, Wouk obtained a commission in the U.S. Navy. Service in the Pacific aboard the destroyer-minesweepers U.S.S. Zone and U.S.S. Southard gave him firsthand experience of navy life and combat at sea.

Upon his discharge in 1945, he married and began his career as a writer. While at sea, he had begun a story about the radio industry; his mentor from Columbia, the philosopher Irwin Edman, helped him secure a publisher, and Aurora Dawn (1947) became a Book-of-the-Month Club selection. Good fortune continued for Wouk when his second novel, The City Boy (1948), a story of a young Jewish boy in New York City, received similar popular acclaim.

Wouk’s third novel, The Caine Mutiny, based loosely on some of his own experiences in the Pacific, became the most popular sea novel emerging from America’s World War II experience. Unlike most war novels, however, The Caine Mutiny contains no descriptions of conflict; rather, it is a study of the transformation of a young civilian into a naval officer and of the problems of maintaining military discipline during wartime. Wouk stresses the importance of officers and crew working together to overcome the natural elements and the skills and courage required to command a warship both in peace and in times of combat. In keeping with his unusual approach, Wouk focuses on the need for men to show presence of mind not only when their ship is under attack from enemy forces but also when the sea itself becomes their enemy. In fact, the mutiny occurs when the infamous Captain Queeg is unable to act during a monsoon that threatens to capsize the Caine. The novel’s climactic scene, the court-martial of the mutineers who rebelled against the martinet commander Captain Queeg, became the source for Wouk’s only successful Broadway play, The Caine Mutiny Court-Martial (1954), and the novel served as the basis of an Oscar-winning film (1954), starring legendary actor Humphrey Bogart as Queeg.

In 1964, after completing three more novels and a nonfiction work on his Jewish faith, Wouk undertook a project that would occupy him for the next fourteen years: a study of the causes and consequences of World War II. Published as two novels, The Winds of War (1971) and War and Remembrance (1978) tell the story of the impact of the war on a navy family named the Henrys. Major sections of each novel detail the submarine war in the Pacific and various major sea battles, particularly Midway and Leyte Gulf. Wouk’s careful scholarship is evident in his accounts of these pivotal engagements. Wouk’s descriptions of submarine warfare are particularly detailed; he is able to capture the tension and fear that submariners experience when they lose the element of surprise, which makes them a suitable foe for more heavily armed warships. He is also able to give brief but compelling portraits of the role of the aircraft carriers in the war, detailing both the strategic impact of their ascendancy in naval warfare and the human dimensions of the transformation wrought upon the navy as the battleships and their venerated commanders reluctantly gave way to younger men who fought the war in the skies above the ocean.

In the early 1980s both The Winds of War and War and Remembrance were made into television miniseries, appearing in 1983 and 1988; Wouk assisted in writing the screenplay for both. Concurrently, he turned his attention to his Jewish heritage and the history of the nation of Israel, publishing three novels on these subjects during the next decade.