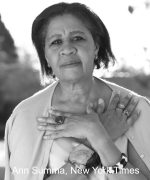 KINCAID, JAMAICA (1949 – ). Jamaica Kincaid is an award-winning author and essayist of Caribbean descent. Born Elaine Potter Richardson in St. John’s on the island of Antigua, she moved to the United States in 1965 at the age of sixteen to work as an au pair, later attending Franconia College. In 1972 she changed her name to Jamaica Kincaid and regularly submitted pieces to The New Yorker, where she later became a staff writer, about New Yorkers’ extravagant lifestyles.

Kincaid is considered a leading voice in both contemporary fiction and Caribbean literature, with a particular focus on family, diaspora, and the legacy of maritime colonialism. Her other areas of expertise are gardening and travel. She has won the Guggenheim Foundation Fellowship for Fiction, PEN/Faulkner Award for Fiction twice for At the Bottom of the River (1983) and The Autobiography of My Mother (1996), as well as the Columbus Foundation’s American Book Award for See Now Then (2013), as well as many more. She is currently a visiting professor at Harvard University, teaching creative writing with an emphasis on African American writers. Kincaid teaches in both the English and the African and African American Studies departments.

While not inherently autobiographical, most of Kincaid’s published work draws heavily on her own experiences in both Antiqua and the United States. Very early in her career, she began to reference the Caribbean Sea and the Atlantic Ocean, the sea symbolic of life in the Caribbean, and the ocean a rite of passage to new worlds. The sea shapes the island’s culture and people as both a resource and boundary for their daily lives, acting as a source of home and great turmoil.

In the prose poem collection At the Bottom of the River, in the vignette “Blackness,” a child “…sits idly on a shore, staring hard at the sea beneath the sea and at the sea beneath even that.” The sea, taking on a character of its own, is at once fathomless as it is all consuming, “annihilating” the girl’s sense of being. Descriptions like that of “Blackness” mirrors a trend towards psychological struggle in sea literature more broadly, and in this girl’s case, shaping one’s identity versus being consumed by the environment they are raised in.

Kincaid returns to the motif of the sea and the ocean in A Small Place (1988), which connects the Trans-Atlantic Slave Trade and the vestiges of colonialism with incoming tourists to newly independent Antigua. While the tourists/colonizers enjoy the serene waters, Kincaid reminds the reader that “the Caribbean Sea is very big and the Atlantic Ocean is even bigger; it would amaze even you to know the number of black slaves this ocean has swallowed up.” She effectively balances both the horrors of the post-colonial landscape, and passage between ocean and sea as a traumatic experience for Black Antiguans, while at the same time showing how it is viewed as a “paradise” by outsiders.

One of Kincaid’s most famous works, her debut novel Annie John (1985), first featured her abundant allusions to the sea and the ocean. Set again in her birthplace of Antigua, and in many ways mirroring her own childhood in the West Indies, the titular character navigates a contentious relationship with her mother, her budding sexuality, experiences with racism, and with mental illness. Much of Annie’s coming of age is reflected in her relationship with the Caribbean Sea, and to water in general. In Chapter Three, “Gwen,” the properties of salt water heal Annie physically as she bathes with her mother, noting, “bathing in the sea was a medicine and not a picnic.”

By the conclusion of the novel, Annie is on her way to England, in a ship carrying her back to the metropole across the ocean from her tiny remnant of the British empire. This symbolism is echoed in Lucy (1990), as that titular character travels by boat to the United States to become an au pair. Lucy frequently recounts her life in the West Indies, and her admiration for the sea, while juxtaposing her new life against her past.

Kincaid at the Chicago Humanities Festival (2014)

Articles in The New Yorker, including first printing of some of her novels and stories (1974-present)

This entry funded by a grant from the Association for the Study of Literature and the Environment.