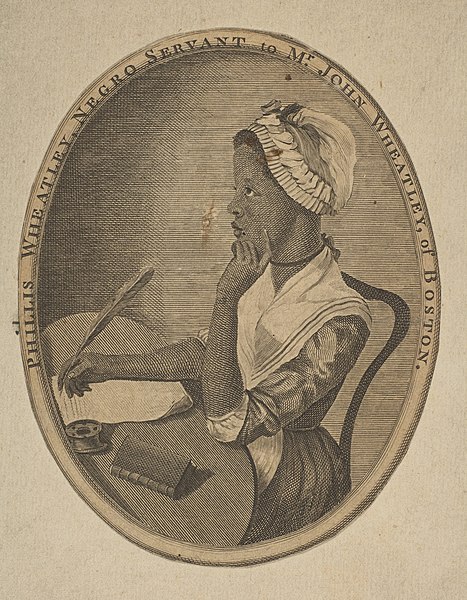 WHEATLEY, PHILLIS (c. 1753-1784). Phillis Wheatley was the first African American, and one of the first women, to publish a book of poetry in the American colonies. As is the case with many enslaved people, very few facts of Wheatley’s life before her enslavement can be verified. Many sources assume that Wheatley was born and grew up in Senegal, West Africa, though there is evidence to suggest that she may have been taken further down the coast or even transported from hundreds of miles inland. Similarly, we can only guess that she was approximately seven years old, based on her size and missing front teeth, when she was stolen by slavers. Even her name comes from the slave ship that picked her up: The Phillis. From West Africa, she was transported to the Boston docks, where she was purchased and enslaved by John and Susanna Wheatley.

The Wheatley family soon recognized her intellectual talents and set about fostering them. Afforded an education unusual at that time for an enslaved person or a woman, Wheatley rapidly became known for her literary talents amongst the family’s social circles. In 1770, her elegy for the popular reverend George Whitefield was published in Boston and London, propelling Wheatley all at once to greater regional and international fame. The elegy also gained her the support of the Countess of Huntingdon, who became Wheatley’s literary patron and was instrumental in circulating Wheatley’s works on a wider scale. Though the two never met, the Countess was responsible for the highly publicized 1773 London publication of Wheatley’s first book, entitled Poems on Various Subjects, Religious and Moral. It was rapidly championed by abolitionist causes. When Wheatley returned to America from her publication tour, after crossing the Atlantic eastbound and westbound as a passenger on the Wheatley family’s ship, the London Packet, Susanna Wheatley freed her. Though free, Wheatley remained with the family until the deaths of Susanna Wheatley in 1774 and John Wheatley in 1778 removed much of the security she had built up as an African American intellectual. In 1778, she left the Wheatley household to marry John Peters, a free man. She continued to write during this period and, though she was never able to get a second book of poetry published, several of her poems that were to be included in the second volume were later published in pamphlets and newspapers.

Though not primarily a maritime poet, Wheatley does express a connection to the sea in some of her work. She was inspired to compose her first published poem, “On Messrs Hussey and Coffin” (1767), after hearing the titular men’s impressive tale of their survival at sea. Wheatley’s identity as an enslaved person and an artist also influenced the ocean’s role in her work. Her first sea voyage was the harrowing Middle Passage and her later fame allowed for a deliberate ocean crossing as she traveled from America to England and back. This presence of oceanic travel can be seen in poems like “On Being Brought from Africa to America” (1773), which emphasizes the ocean between America and Africa, both figuratively and literally. Similarly, though never mentioned directly, the ship setting of “A Farewell to America” (1773) is so clear that one can almost see New England vanishing below the horizon.

Wheatley’s main association with maritime literature results from the relatively recent (1999) rediscovery of a lost Wheatley poem titled “Ocean” (1773). Meant to be published in the second volume, the poem gained broad popularity when Rita Dove, the first Black poet laureate of the United States, publicly read it aloud in 1999. Although “Ocean” bears many stylistic similarities to Wheatley’s other poems, it expresses stark divergence from the assimilationist rhetoric evident in much of Wheatley’s earlier work, instead taking a strong abolitionist stance.  “Ocean,” like many of Wheatley’s other poems, blends classical tropes in a manner that perhaps more closely resembles Milton’s 17th-century Paradise Lost, or Dante’s 14th-century Inferno than more contemporaneous literature. The neoclassical tropes in the poem trace back to Ovid and Homer, and many scholars have observed both Wheatley’s neoclassical influences, as well as her close engagement with contemporaneous translations of Homeric literature. In particular, Wheatley had obtained Alexander Pope’s translation of Homer’s Iliad shortly before the composition of “Ocean.” In the Greco-Roman classical tradition with which Wheatley engages in her poem, the ocean is a site of disruption and radical contingency upon which wrongs are righted, true characters revealed, and finally the worthy are returned home and reunited with kin. Wheatley redeploys these tropes in new abolitionist contexts;  while the poem is ostensibly a reflection on Wheatley’s 1773 return to America after a visit to England, it is also a coded awakening to, and assertion of, Black power.

In vain my Eyes explore the wat’ry reign,
By you unaided with the flowing strain.
When first old Chaos of tyrannic soul
Wav’d his dread Sceptre o’er the boundless whole,
Confusion reign’d till the divine Command
On floating azure fix’d the Solid Land,
Till first he call’d the latent seeds of light,
And gave dominion o’er eternal Night.
From deepest glooms he rais’d this ample Ball,
And round its walls he bade its surges roll;
With instant haste the new made seas complyd,
And the globe rolls impervious to the Tide.

The rediscovery of “Ocean” and its continued relevance and popularity over the past two decades foregrounds Wheatley’s oceanic metaphors as demonstrations of her complex and erudite abolitionist literary legacy. Wheatley invites us to contemplate the (neo)classical ocean as a site of racialized, abolitionist, antiracist resistance, and her strategic deployment of classical tropes serves the twinned purposes of allowing Wheatley to perform assimilationist rhetoric for a white colonial eighteenth-century audience, while also activating a subversive abolitionist discourse coded in classical maritime tropes.

The Collected Works of Phillis Wheatley (1988)

Carretta, Vincent. Phillis Wheatley: Biography of a Genius in Bondage. Athens, U of Georgia P, 2011.

This entry was posted in W and tagged 18th Century, Middle Passage and Enslavement, Passenger Travel, Race/Ethnicity and the Sea. Bookmark the permalink.