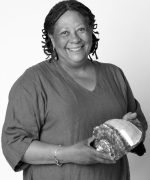 Her poetry narrates centuries-worth of American experiences, from the days of human enslavement to the post-Obama era. Her work has also been deeply personal: her 1990 book The Homeplace, which won the Annisfield-Wolf Award and was a finalist for the National Book Award, is a family history: her mother was a teacher, her father a Tuskegee Airman, and her Caribbean-born great-great-grandmother was sold into slavery.

Her book The Meeting House (2016) is a poetic history of Old Lyme, Connecticut. Though this collection is not explicitly oceanic, the eponymous Meeting House built in 1666 is a place where the prosperous families of whaling captains who anchored the town came into contact with enslaved Africans, Indigenous people, indentured servants, and other immigrants in this supposedly more “enlightened” part of the country.

Similarly, in My Seneca Village (2015) Nelson revisits the multi-cultural and multi-ethnic Manhattan neighborhood in the mid-nineteenth century. In “Under the Fathomless” she imagines a boy called Frederick Riddles, circa 1828, who wonders to himself: “Is my mind a net sieving through thought-filled streams?”

Twenty years later he is on a ship from New York to Nicaragua, writing a letter to the girl he loves:

Sailing choppy coastal waters. Seasick
Nothing but blue to see, both sea and sky.
Our wooden vessel crackled, banged and creaked.
Twenty awe-making sunrises and sunsets.

The Homeplace, The Meeting-House, Seneca Village, and The Freedom Business (2006) collectively explore a central American question: What is community? How do people, who have arrived in America by sea from all different corners of the earth, form their own communities, while coexisting with others?  The Homeplace follows the individual lives of Nelson’s parents and ancestors who search for their places in a world still violent towards African Americans. Her father, for instance, finds his own community with fellow Tuskegee Airmen during World War II. She explores their brotherhood and the lives of a few of the men with whom her father served.

For Nelson, the sea is not uniformly calm or violent, inspiring or dispiriting. Sometimes, it is a space for gratitude. Her 1994 poem “Dusting” is a prayer of gratitude to the “submicroscopic / living things,” beginning with those in the sea (“Thank you for these tiny / particles of ocean salt”) before turning to more domestic “dust.” “Counting Blessings” (2015) recounts the Cavanaugh family’s sea passage from Ireland to America in the 1845 Irish potato famine. A note accompanying the poem tells the reader that “Mortality rates of up to 30% were common on the ‘coffin ships’ crossing the Atlantic,” yet the poem depicts “none of them shivering, / everyone fed, / head to feet sleeping, four butts to a bed.”

For many of the characters in Nelson’s work, the sea voyage is the beginning of their new American identity— the literal and figurative passage to their “new” world. However, Nelson is arguably at her most powerful when writing about those who survived the passage in chains. Her most direct reckoning with the Middle Passage is in her poem, “A Voyage by Sea (1738),” which was published in her collection The Freedom Business (2006), based on Venture Smith’s 1798 narrative. “A Voyage By Sea” lists the physical horrors–“Discharge excretion diarrhea spew”–and the ravages of disease, “men and women tossed like offal to the sharks,” ending with the reality of so many souls that are forgotten, their names unknown in a sea that is “graveless” and “greedy.” Nelson later contributed “Kidnapped by Aliens” to the children’s anthology Travelling the Blue Road: Poems of the Sea (edited by Lee Bennett Hopkins, 2017), which describes the capture of an African boy and his transport through the Middle Passage:

We reached a body of water as vast as the sky.
They locked us for days in a huge house made of stones.
When they brought us out, sunlight blinded me.
I followed the others up a slanting ramp
into the craft that had brought the aliens
from wherever they came from to our peaceful world.
That was my last glimpse of the world…
I lie curled around terror, facing the blue unknown.

Nelson’s writing for children and young adults does not spare them the horrors of American history, but her use of the first-person narrator in much of her work places often-real, meticulously-researched human faces of all colors into children’s understanding of our shared history.

The sea can also be a place of joy, especially in the hands of Nelson’s real-life friend, Father Jacques de Foïard-Brown (the recurring character “Abba Jacob” in her poetry). In “Blessing the Boats,” (1994) Nelson relates her friend’s story of being asked to “bless the boats” in a coastal town in France, wading out to form the sign of the cross on the bow of a fishing boat in front of mostly-topless Italian women on holiday. The humor of “Blessing the Boats” is contrasted in “Memento” (1994), in which the Father’s irreverence is replaced by earnestness and love upon hearing a young girl’s first confession, “Behind them / sky, sea, three sailboats.”

“Octopus Empire” (2019) is perhaps her most explicitly oceanic poem, though still a mediation on the creation of community. The poem’s second and final stanza reads:

Now scientists have found
a group of octopuses
who seem to have a sense
of community, who
live in dwellings made of
gathered pebbles and shells,
who cooperate, who
defend an apparent
border. Perhaps they’ll have
a plan for the planet
in a millennium
or two. After we’re gone.

Of “Octopus Empire,” Nelson writes: “Under the gloom cloud of what seems to be the planet’s bleak future, for whose bleakness homo so-called sapiens is apparently solely responsible, I happened to see and read an article about the recent discovery in Australia’s Jervis Bay of a large number of Octopus tetricus [gloomy octopuses] which live in community, exhibiting complex social interactions. Playful marine biologists have dubbed the community “Octlantis.” Reading the article gave me some hope for the planet.” Though “Octopus Empire” clearly wrestles with the social and ecological destruction caused by settler colonialism, it nonetheless exalts intentional community: not among the human creatures who journey on the sea, but those creatures for whom the sea is origin, journey, and destination.

American Academy of Poets (audio only)

Interview from The Fight and the Fiddle, “Teaching American History Through Poetry” (video): YouTube

Interview from On Being radio show (audio and transcript): OnBeing.org

Nelson, Marilyn, Deborah Dancy, and Venture Smith. The Freedom Business, including A Life and the Adventures of Venture, a Native of Africa. Wordsong, 2008.

This entry funded by a grant from the Association for the Study of Literature and the Environment.