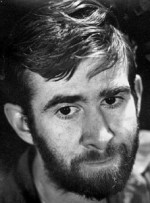 WILSON, GILBERT [BROWN] (1907-1991). Having studied in the 1930s to be a muralist, from the 1940s through the 1960s Gilbert Wilson worked in diverse media to interpret Moby-Dick (1851) visually, with the intention of bringing Herman Melville’s novel to the attention of the American common people. In the early 1940s, while working with Rockwell Kent on a mural, Wilson read Moby-Dick for the first time, in the edition that Kent had illustrated. He took exception to Kent’s interpretation of the novel and especially with Kent’s portrayal of Captain Ahab. The result was a lifelong obsession with painting the scenes and characters in the book, concentrating on Ahab and the white whale. During this period, he created over 300 dramatic paintings inspired by the novel, which became the basis for a film adaptation of Moby-Dick (1955).

In addition, he wrote a libretto, entitled The White Whale (c.1965), designing a stage set and scenes for an operatic version of the novel. To begin the opera, Wilson envisioned a cosmic backdrop, against which an image of the whale would appear. This fusion of sea and cosmos he returned to again for one of his final projects, his design for the ceiling of the Frankfort, Kentucky, post office (c.1970). Although never realized as a mural, Wilson’s painting of Moby Dick, swimming among stars, planets, and galaxies, projects a wondrous and mysterious interpretation of Melville’s whale and of the sea.

This entry was posted in W and tagged 20th Century, Multimedia/Multimodal, Whaling/Sealing. Bookmark the permalink.