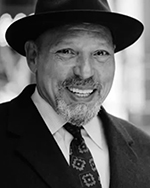 WILSON, AUGUST (1945-2005). August Wilson, a prominent American playwright, was born Frederick August Kittel in Pittsburgh, Pennsylvania on April 27, 1945 to Frederick Kittel, a German baker, and Daisy Wilson Kittel, an African American cleaning woman. Born the fourth of six children, he grew up in a crowded two-bedroom apartment behind a grocery storefront in the historically African American “Hill District.”

After his parents divorced when he was a teenager, his mother remarried to David Bedford, who moved the family to a white neighborhood in Hazelton, Pennsylvania. Wilson attended a Catholic high school, but felt extreme racism as the only black student. He transferred to two other schools, but dropped out of high school at age fifteen. Rather than give up on education, Wilson began spending time at the Carnegie Library in Pittsburgh, reading the works of African American writers. Through these readings, Wilson developed a connection to his black heritage, particularly the struggle of the Middle Passage. This led to the beginning of his interest in the spiritual and emotional significance of water, as he viewed the Atlantic Ocean as a symbol of the African Diaspora.

After joining the army in 1963 and serving for one year, Wilson returned to his literary passion. In 1965 he bought himself a typewriter in order to pursue his goal of becoming a professional writer. That same year, following the death of his father, he legally adopted his mother’s maiden name, changing his name to “August Wilson.” Working odd jobs to support himself, Wilson began to submit poetry to magazines. In 1968, Wilson entered into the theatre genre when he and his friend Rob Penny founded “The Black Horizons on the Hill Theater,” where Wilson directed and acted in the company’s performances.

Moving to St. Paul, Minnesota, in 1978 allowed Wilson to find his first paid writing job, working at the Science Museum of Minnesota to adapt Native American stories into children’s plays. He wrote his first play for an adult audience, Jitney (first perf. 1982), in 1979. Meanwhile, Wilson had already begun writing the first play of his renowned ten-play series the “Pittsburgh Cycle,” although Ma Rainey’s Black Bottom (first perf. 1984) is the only one of the ten not to be set in Pittsburgh. Each of the plays in the series focus on a different decade of the twentieth century, chronicling the experience of African Americans.

Two of these Pittsburgh Cycle plays, Gem of the Ocean (first perf. 2003) and Joe Turner’s Come and Gone (first perf. 1984), use the horrors of the Middle Passage and resulting metaphors of the ocean to help both characters and audiences understand their past. While other playwrights, such as Eugene O’Neill or Tennessee Williams, have set their works at sea or in coastal environments, Wilson used the ocean as a much larger metaphor to help explain African American history. After quickly gaining prominence, Joe Turner’s Come and Gone opened on Broadway at the Ethel Barrymore Theatre in March 1988, where it was nominated for a Tony and won the New York Drama Critics’ Award. The play, set in a boarding house in Pittsburgh, highlights how the ocean showed character Bynum “the secret of life,” and how understanding the ocean can help one understand him or herself. Gem of the Ocean premiered at Chicago’s Goodman Theatre in 2003, before moving to Broadway in 2004. This play, set in the parlor of a Hill District home, similarly discusses the power of the ocean to help the character Citizen Barlow understand his path after the suicide by drowning in the river of a man falsely accused of stealing nails. Barlow had been the one who stole the nails.

Although he only lived in a coastal town from 1990 until his death, when he resided in Seattle, Washington, Wilson had great respect for the maritime history of his African American ancestors. Wilson himself never visited Africa, however. He disliked travel and believed the more immediate history of African Americans was paramount. Both Gem of the Ocean and Joe Turner’s Come and Gone focus on the violence African Americans experienced on the Middle Passage, describing a “City of Bones” deep beneath the Atlantic Ocean. Water, however, also signifies purity in both stories, and characters bathe in both it and blood in order to find peace, purification, and cleanliness. Wilson uses water as the living embodiment of history, helping both viewers and his characters connect to the African American experience of past centuries.

Over the course of his life Wilson found great success as a playwright. He became the first African American to have two plays on Broadway at the same time and is one of only seven Americans ever to win two Pulitzer prizes for drama. Two weeks after his death on October 2, 2005, the Virginia Theatre on Broadway was renamed the August Wilson Theatre, marking the first time a Broadway theatre took the name of an African American. Audiences continue to flock to performances of his plays, leaving many with a different view of both African American history and the maritime environment.

Characters and synopsis of Gem of the Ocean
Huntington Theater

The Theater of August Wilson.

This entry was posted in W and tagged 20th Century, Atlantic Ocean, audio, Middle Passage and Enslavement, Plays, Race/Ethnicity and the Sea, video. Bookmark the permalink.