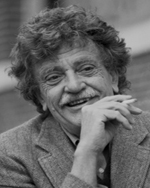 VONNEGUT, KURT, JR (1922-2007). Kurt Vonnegut was born in Indianapolis but soon moved east, eventually settling in Cape Cod, Massachusetts, in 1951, where he lived for twenty years. His essay “Brief Encounters on the Inland Waterway” (first pub. in Venture in 1966) is a description of a trip from Massachusetts to Florida on the Kennedy family yacht Marlin. In his novels, Vonnegut generally uses the beauty of sea settings as an ironic backdrop for his comments on the potential absurdity and inhumanity of the grand myths of history, science, and progress. He uses various island settings to suggest both community and startling disconnectedness.

Vonnegut’s novel Cat’s Cradle (1963), set in the future, centers on a religion called “Bokononism,” which is practiced only on a small island in the Caribbean. Central to the novel is a material called “ice-nine,” a form of ice with a melting point of 114.4′ Fahrenheit that instantly freezes any water that it touches. When a character in the novel who has died from swallowing ice-nine slides into the waters of the Caribbean, the oceans of the earth freeze, ending all life.

Another novel, Galapagos (1985), set one million years in the future, is the story of a luxury cruise liner, the Bahia de Darwin, which embarks in 1986 on “The Nature Cruise of the Century” just as World War III breaks out. The ship’s passengers include a schoolteacher, a con man, a computer genius, and an American businessman. When the ship is wrecked in the Galapagos Islands, the passengers are the only survivors of the war. They form the gene pool from which future humans evolve. These creatures who evolve are called “fisherfolk,” and they have flippers, beaks, and small brains.

“Brief Encounters on the Inland Waterway” (1966)