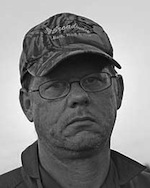 The first volume of Seven Dreams, The Ice-Shirt (1990), centers on the c. A.D. 1000 journey to “Vinland” by the Norse and their subsequent clashes with the Micmac Indians in Newfoundland. Vollmann’s account–which includes his observations of contemporary Arctic and North American seacoast locales–is particularly notable for its depiction of icebound seas. Fathers and Crows (1992), the second novel, focuses on efforts by seventeenth-century Jesuits to convert the Hurons in southern Canada. It also charts Samuel de Champlain’s frustrated attempts to find a water passage to China through the Canadian wilderness, during which he encounters the “Sweetwater Sea” (Lake Huron). Although the sea is not a consistent presence in this work, two aquatic motifs–the “Stream of Time” and the water demon Gougou–serve multiple symbolic purposes. The Rifles (1994), the third published part of Seven Dreams, follows Admiral John Franklin’s final, failed attempt to establish the Northwest Passage in 1845, which saga Vollmann juxtaposes with his own journey to the Arctic Circle and the Resolute Bay area.

Among Vollmann’s other works is the autobiographical, illustrated travelogue The Atlas (1996), which includes descriptions of the Arctic and of islands in the Northwest Territories and other sea references. Vollmann’s interest in the sea is also shown in an article that he published in the 1998 issue of Civilization, “Melville’s Magic Mountain,” where he muses about the writing of Moby-Dick (1851) and other aspects of Herman Melville’s life.