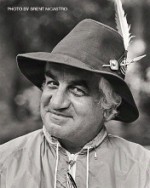 Born and raised near Milwaukee, Vukelich was influenced by the Great Lakes from youth. He explored and fished the Lake country with his father, regarding the outdoors as a place of worship. Inspired by Henry David Thoreau and John Muir, Vukelich revered the Lakes, and his writing often concerns their preservation. His Lakes fiction is vivid and historically accurate.