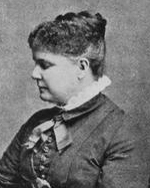 THAXTER, CELIA [LAIGHTON] (1835-1894). Celia Thaxter was born in Portsmouth, New Hampshire, to Thomas and Eliza Laighton, who moved to the Isles of Shoals, nine miles off the coast of New Hampshire, when Celia was five years old. They eventually settled on the largest of the islands, Appledore, where they built and operated a summer resort hotel beginning in 1848. In 1851 Celia married Levi Thaxter Jr. and a few years later moved to the mainland, settling in Newtonville, Massachusetts. She returned to Appledore each summer, helping to manage the hotel and entertain prominent literary guests, including Nathaniel Hawthorne, Henry David Thoreau, Richard Henry Dana Jr., James and Annie Fields, Lucy Larcom, and Sarah Orne Jewett. James Russell Lowell’s “My Appledore Gallery” (1854) and John Greenleaf Whittier’s “Lines on Leaving Appledore” (1864) commemorate visits made by the poets to the Shoals. Thaxter began an ardent correspondence with Whittier in the 1860s, which continued for the remainder of her life.

The first of her published poems, “Land-locked” (1861), which appeared in The Atlantic Monthly, expresses an islander’s longing from the mainland for her insular paradise. Thereafter, much of her poetry rhapsodizes the rigors and the simple beauty of island life. Her first published volume of verse, Poems (1872), explored facets of island life that would recur in subsequent collections, Drift-Weed (1879) and The Cruise of the Mystery and Other Poems (1886). These include narrative accounts of island legend and history (“The Spaniards’ Graves at the Isles of Shoals” [1865], “The Wreck of the Pocahontas” [1868], “The Cruise of the Mystery” [1886]) and descriptive reflections of the islands’ flora (“Rock-Weeds” [1868], “Seaside Goldenrod” [1874], “Flowers in October” [1874]), often exploring the paradox of thriving vegetative life under inhospitable, windswept conditions. Thaxter’s enthusiasm for island bird life is the subject of numerous poems, including “The Sparrows” (1874), “Nestling Swallows” (1875), “Medrick and Osprey” (1875), and “The Sandpiper” (1894). The destructive power of storms lashing the islands often finds a countervailing calm in such poems as “A Summer Day” (1862), “Leviathan” (1876), “Contrast” (1876), and “November Morning” (1886).

In addition to her poetry, Thaxter published a series of five essays on the islands in issues of The Atlantic Monthly from 1869 to 1873, collected as a book, Among the Isles of Shoals (1873). These sketches vividly narrate island history and are drawn from a variety of oral and written sources, including older residents, town records, journals, and even one of Cotton Mather’s illustrations of providential intervention among Shoals fishermen. With Thoreauvian acuity, she records the cycle of the seasons–the late arrival of summer, the lingering fall, the bone-chilling and desolate winter, and the slow return of spring birds and vegetation–with consistent reference to the dominant influence of the surrounding sea on the island world. Her nostalgic recollections of childhood pleasures and pastimes on White Island, where her father served as lighthouse keeper before the move to Appledore, make clear the reason for her lifelong passion for island life.

In “A Memorable Murder” (1875) Thaxter recounts the gruesome details of the murder in March 1873 of two Norwegian immigrant women on the island next to Appledore called Smuttynose. Contemporary Massachusetts author Anita Shreve offers a fictionalized account of this crime, The Weight of Water (1997), in which Thaxter appears as a minor character.

Thaxter died on Appledore Island on 26 August 1894. Thaxter’s An Island Garden (1893) continues to find an appreciative readership among both amateur and professional gardeners.

The Cruise of the Mystery and Other Poems (1886)