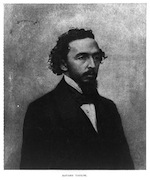 TAYLOR, JAMES BAYARD (1825-1878). James Bayard Taylor, born in Chester County, Pennsylvania, launched his career as a travel writer with Views Afoot (1846), an account of a walking tour of Europe, and soon became probably the most popular and prolific American travel writer of his time. His accounts usually emphasize inland areas, but two have significant sections on sea travel. A Visit to India, China, and Japan in the Year 1853 (1855) recounts a hurried trip leading him to Shanghai, where he was appointed a master’s mate by Commodore Matthew Perry on the voyage to open Japan to the Western world. Though Taylor sailed from Gibraltar across the Mediterranean and then from Suez to Bombay, he says little about the journey except to describe the British fortress at Aden, and even less about the subsequent journey from Calcutta to Shanghai.

He reports the journey to Japan more fully, though he was obliged to give his trip notes to the navy and depends heavily on memory for this early account of American encounters with Japan. His narrative also describes visits to the Loo-Choo Islands (now the Ryukyu), the Bonin group, and the Marquesas, mentioning in his narrative Herman Melville’s Typee (1846). When negotiations with Japan begin, Taylor does not find Perry’s aggressive tactics at all offensive but contrasts what he considers the forthrightness and firmness of Perry with the duplicity and dissimulation of the Japanese. Despite the brevity of his career as a naval officer, Taylor asserts that promotion in the navy should not be based on seniority and that corporal punishment should be maintained.

In the summer of 1857, as part of a plan to describe for a volume entitled Northern Travels (1858) both a day in which the sun did not rise and a day in which it did not set, he sailed up the coast above Norway into the Arctic circle. Again he writes little about the sea, admiring sunsets and a glacier, finding the maelstrom more famous than dangerous, and thinking the descendants of the Vikings an unimpressive lot.

This entry was posted in T and tagged 19th Century, Arctic, Navy/Coast Guard. Bookmark the permalink.