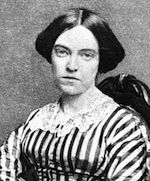 STODDARD, ELIZABETH [DREW BARSTOW] (1823-1902). Iconoclastic novelist, short story writer, essayist, and poet, Elizabeth Stoddard was born in the coastal town of Mattapoisett, Massachusetts, the daughter of its foremost shipbuilder and maritime merchant. Both the fluctuations of her father’s maritime fortunes and the constant presence of the sea during her childhood had an impact upon her later writing. Although Stoddard moved to New York after her 1852 marriage, she returned regularly to Mattapoisett during her summers to commune with the sea.

Her journals and letters reveal a familiarity with the sea based on her ocean walks and reveries and her subsequent subjective identification with its moods. From her earliest published poems and stories, Stoddard invokes the sea to project intense feeling, associating it in poems such as “House by the Sea” and “House of Youth” (1855) with loss and grief and in “My Own Story” (1860) with a tempestuous eroticism. The sea plays a critical role in all three of her novels, The Morgesons (1862), Two Men (1865), and Temple House (1867), each of which is set in a coastal community resembling Mattapoisett. In The Morgesons, a pioneering novel describing a young woman’s defiance of conventional gender and religious attitudes as well as her attempt to shape herself in terms of her intelligence and sexuality, Stoddard’s partially autobiographical heroine Cassandra increasingly discovers a sense of personal power projected by the sea. Less complex in symbolic and psychological terms than The Morgesons, Stoddard’s other novels represent the sea as an arbitrary natural force interrupting and disturbing human affairs, responsible for brutally destroying life as well as bringing newcomers to a community.

Stoddard’s biographer, James Matlack, maintains that only in her response to the sea did she approach an acknowledgment of divinity.