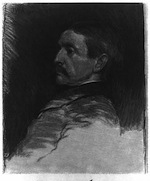 STOCKTON, FRANK [FRANCIS] R[ICHARD]. (1834-1902). Best known for his short story “The Lady or the Tiger?” (1882), Frank R. Stockton lived in the eastern United States and wrote variously for both children and adults. His interest in the water was more thematic than topical. For one thing, the novel that begins his most famous series, Rudder Grange (1879), involves a family’s life aboard a Hudson River canalboat only at the beginning. The family vacates when the boat floods, but the spirit of the novel’s eponymous boat goes with them.

Elsewhere, Stockton’s use of the nautical topics is wide-ranging: The Merry Chanter (1890) has a heroine in control of a ship; The Adventures of Captain Horn (1895) is set on the coast of Peru; and Kate Bonnet: The Romance of a Pirate’s Daughter (1902), Stockton’s last novel, is about an unrepentant pirate who is eventually hanged. Stockton’s short stories include those collected in Afield and Afloat (1900). Notable are “The Skipper and El Capitan,” in which love and war are resolved when the captain of a Spanish steamer marries the daughter of an American schooner skipper, and “The Landsman’s Tale,” in which a skipper tells of a foundering ship whose crew chooses to rescue the ship’s library over other provisions.

Buccaneers and Pirates of Our Coast (1898)

Kate Bonnet: The Romance of a Pirate’s Daughter (1902)

This entry was posted in S. Bookmark the permalink.