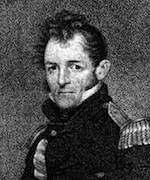 PORTER, DAVID (1780-1843). The son of a veteran of the American Revolution, David Porter was born in Boston and grew up in Baltimore. He began his naval career as a midshipman in 1798 and became master commandant in 1806. In the War of 1812, Porter was captain of the frigate Essex (1799) and harassed the British whale fishery in the Pacific. Though losing his ship in 1814 in a battle with the British ships Phoebe and Cherub, Porter became a national hero. After the war he worked as navy commissioner, commander of the West India Squadron, commander of the Mexican navy, consul-general to the Barbary States in Algiers, and U.S. charge d’affaires to the Ottoman empire, where he remained resident until the end of his life. Two of his children, David Dixon Porter and the adopted David Glasgow Farragut, would also become well-known naval officers.

Porter recounted his adventures of the War of 1812 in Journal of a Cruise Made to the Pacific Ocean (1815), which documents his seafaring abilities, chronicles his fight against the British, and, supported by masterful drawings from Porter’s own hand, depicts his exploration of the Marquesas and the Galápagos Islands. His patriotic struggle was eulogized by Washington Irving in “Biographical Memoir of Captain David Porter” (Analectic Magazine, September 1814) and by Philip Freneau in the poem “On the Capture of the United States Frigate Essex” (1815). James Fenimore Cooper summed up Porter’s achievements in the History of the Navy (1839), while Herman Melville criticized Porter’s treatment of Marquesan natives in Typee (1846) but also drew inspiration for his sketches called “The Encantadas” (1856) from Porter’s description of the Galápagos Islands. The zoologist William Beebe praised Porter’s geographic and biological observations in Galapagos, World’s End (1924). Porter wrote another travel book, Constantinople and Its Environs (1835), which collects his experiences in Turkey and contains his professional assessment of the country’s navy.

A good recent study is The U.S.S. Essex and the Birth of the American Navy by Frances Diane Robotti and James Vescovi (1999), a patriotic tribute to the early navy.

Journal of a Cruise Made to the Pacific Ocean (1815)