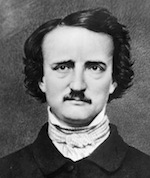 Poe’s use of nautical lore in his writing was informed by his own experiences at sea as well as his use of authentic maritime materials. He observed the workings of vessels during transatlantic and coastal passages, and he experienced being at sea in severe weather. As a child he crossed the Atlantic twice with his foster parents, the Allans. The first crossing, in 1815, when he was six, was a rough voyage of thirty-seven days from Norfolk to Liverpool; in 1820 he returned to New York in another transatlantic passage, this one lasting thirty-six days. Between March and May 1827, he traveled on coastal vessels between Richmond, Norfolk, and Baltimore. After he joined the army in May 1827, his battery was moved by brig from Boston through severe gales off Cape Cod to Charleston, South Carolina, en route to nearby Fort Moultrie. A year later Poe’s battery was moved, again by vessel, from Charleston to Fortress Monroe, Old Point Comfort, Virginia.

For his source material, Poe took considerable information from Benjamin Morrell’s Narrative of Four Voyages (1832), Jeremiah Reynolds’ Address on the Subject of a Surveying and Exploring Expedition to the Pacific Ocean and South Seas (1836), chronicles of maritime disasters at sea, and other nautical materials. Occasionally, he copied the source directly, although he is not always accurate in his own descriptions of shipboard activity or in conveying nautical information.

His three sea tales, “MS. Found in a Bottle” (1833), The Narrative of Arthur Gordon Pym of Nantucket (1838), and “A Descent into the Maelstrom” (1841), are accounts of miraculous survival in realistic maritime settings. The unnamed voyager in “MS.” sets sail from Java, and when the ship founders in a storm, he is somehow transferred from the deck of one ship to the rigging of another. Pym embarks from Nantucket and voyages past a number of actual places while he escapes a number of near deaths, though he ends in a fantasized Antarctica. In “Maelstrom” an old sailor relates his return from the depths of a giant whirlpool that lies off the coast of Norway.

Several other tales contain references to the sea. Much of “The Oblong Box” (1844) takes place aboard a coastal packet ship that is lost in a spectacular shipwreck off Ocracoke Inlet. The sea is a felt presence surrounding Sullivan Island in “The Gold Bug” (1843), and “The Premature Burial” (1844) culminates in a dream aboard a sloop anchored in the James River. There are sweeping descriptions of oceans from the elevated perspectives of balloon trips in “Hans Pfaall” (1835) and “The Balloon Hoax” (1844). Sailors appear in “King Pest” (1835), “The Murders in the Rue Morgue” (1841), and “The Thousand-and-Second Tale of Scheherazade” (1845). Sea-like metaphors occur in “Four Beasts in One” (1836, “The sea of people”), in “William Wilson” (1839, “The vortex of thoughtless folly”), and in “The Man of the Crowd” (1840), whose narrator gazes out at “the tumultuous sea of human heads.”

Stephen Marlowe’s contemporary novel The Lighthouse at the End of the World (1995) is a fictional speculation on what may have happened to Poe in the final week of his life, told from the perspectives of Poe and of his fictional detective C. Auguste Dupin. Dominick Argento’s opera The Voyage of Edgar Allan Poe (1976) presents Poe’s nightmarish life and demise as a sea voyage. In 1999 the Pierpont Morgan Library, New York City, mounted “Poe: The Ardent Imagination,” an exhibition commemorating the 150th anniversary of Poe’s death.

The Narrative of Arthur Gordon Pym (1838)