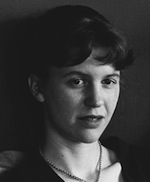 PLATH, SYLVIA (1932-1963). Sylvia Plath was born in Boston, and her family moved to Winthrop, Massachusetts, a seaside suburb, in 1936, where she lived until they moved inland to Wellesley in 1942. Her childhood by the Atlantic was significant in developing her nautical consciousness, and she makes many references to the sea in her poems.

“Full Fathom Five” (1958) deals with a sea god who is both father and muse. Winthrop plays a significant role in two 1959 poems, “Point Shirley” and “Man in Black.” In both, the speaker returns to her childhood home by the sea. In the first, the sea is a devouring natural force; in the second, it forms a macabre setting for the appearance of a ghostly figure, threatening and austere. “The Bull of Bandylaw” (1959) takes a mythic approach to the sea in forceful animal imagery. Plath uses her knowledge of the Massachusetts coast in “Green Rock, Winthrop Bay” (1958), “Suicide off Egg Rock” (1959), “Magnolia Shoals” (1959), “The Baby Sitters” (1961), and “Mussel Hunter at Rock Harbor” (1958). Of these, “Suicide off Egg Rock” is the strongest; here, Plath renders a gritty beach scene and an alienated man with great empathy.

Plath doesn’t always regard the sea as hostile or threatening. A poignant image occurs at the end of “Tulips” (1961), where the convalescent speaker begins to feel emotions again after having closed herself off. These feelings arouse tears, which, like the sea, are warm and salty. Plath’s move to England with her husband, Ted Hughes, gave rise to poems with European seaside settings, notably the bleak “Berck-Plage” and the mythic “Medusa” from 1962. In the last months of her life, personal, psychic, and familial matters preoccupied her, but the sea appears in “Contusion” (1963), where the speaker notes how obsessive the sea becomes as it spills over rocks.