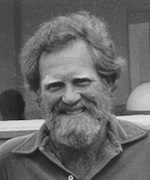 OLSON, [MERLE THEODORE] TOBY (1937- ). Poet and novelist Toby Olson was born in Berwyn, Illinois, but spent much of his childhood moving around the United States. This constant movement instilled a theme of travel into his work, particularly his novels. He spent four years as a medical corpsman in the navy, from 1957 to 1961, then earned a degree at Occidental College in 1965. In 1975, after more moving around the country, he began teaching English at Temple University. Olson does much of his writing at home on Cape Cod, in North Truro, Massachusetts. His novel Seaview (1982) describes the cross-country drive of a couple trying to return to Cape Cod before the death of the terminally ill wife. At Sea (1993), which takes place in North Truro, recounts the investigation of a murder on Cape Cod. In Dorit in Lesbos (1990), the protagonist takes a meditative cruise in waters around Huntington Harbor, California, and Panama and uncovers a family secret on the Greek isle of Lesbos.