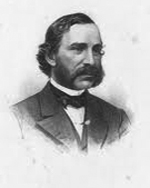 [ADAMS, WILLIAM TAYLOR], “OLIVER OPTIC” (1822-1897). Using the pen name “Oliver Optic,” William Taylor Adams spent twenty years as a teacher in Boston schools and wrote popular children’s fiction in the nineteenth century. The publication of The Boat Club: or, The Bunkers of Rippleton (1855) gave Adams the status of major author of children’s literature. He left teaching in 1865 to write full-time and over the next thirty-two years published 126 novels and almost 1,000 short stories for young people, most often for boys. Many of his works were written in the “series” format, each series consisting of six related, but not chronologically linked, narratives. In addition to his writing, Adams edited several children’s magazines, including Student and Schoolmate, Oliver Optic’s Magazine, and Our Little Ones Magazine.

Adams set many of his stories and books on the sea or inland waters. Even some of his Civil War stories featuring young Union heroes are set in the navy, such as The Sailor Boy: or, Jack Somers in the Navy(1863). Outward Bound; or, Young American Afloat (1867) was one of his most popular series. In the first narrative, a boarding school tries to reform some of its troublesome students by putting them on a ship to learn discipline and teamwork through their exposure to the elements. Though criticized by Louisa May Alcott and others for sensationalism in his narratives, Adams maintained in the preface to The Boat Club that his goal was to “combine healthy moral lessons with a sufficient amount of exciting interest” for young readers. Self-discipline, instruction, moral righteousness, adventure, patriotism, and the love of God and family are the chief characteristics of an Oliver Optic book. The sea often provides a fitting background in which these virtues can be learned by young Americans.

The Sailor Boy: or, Jack Somers in the Navy