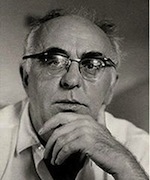 OLSON, CHARLES [JOHN] (1910-1970). The poet Charles Olson was born and raised in the inland city of Worcester, Massachusetts, but the family always spent summers in the fishing port of Gloucester; widowed in 1935, his mother provided a permanent base there for Olson. It thus became the location where much of Olson’s work on Herman Melville was done, which culminated in the provocative Call Me Ishmael (1947). This study of Moby-Dick (1851), expanded from Olson’s earlier straightforward “Lear and Moby-Dick,” published in Twice a Year (1938), draws on Karl Brandt’s Whale Oil: An Economic Analysis (1940) as well as sources available to Melville. It emphasizes Melville’s prescient understanding of the relationship between the commercial activity of whaling in the “space” of the Pacific Ocean and conquest and settlement of the American West. Olson also authored the dance-play The Fiery Hunt (1977), a dramatized debate between Melville’s Ahab and Ishmael, focusing on their conflict over the fate of the white whale.

The Maximus Poems (vol. 1;1960; vol. 2,1968; vol. 3,1975) were begun literally as letters to the Gloucester poet Vincent Ferrini and continued as such from “exile” in Washington, D.C., and Black Mountain College, North Carolina, until Olson took his family to settle in Gloucester permanently in 1957. The poet then began to trace episodes in Gloucester history in great detail. In this epic, two volumes of which were published in Olson’s lifetime and one posthumously, fishermen’s tales of the sea have their place, sometimes as heard conversation, sometimes via the local writer James B. Connolly. Olson himself ventured to sea on only one occasion, a three-week swordfishing cruise in July 1936. It was, as one might expect, a momentous experience for him, recorded fully in his diary and published in Olson: The Journal of the Charles Olson Archives, no. 7 (Spring 1977): 3-42.

The unifying theme of the later Maximus poems is Gloucester as a pivot in the westward migration of peoples from the cradle of civilization in the Near East. The city’s delay in accepting modern habits, retaining the values of courage and trust exhibited by fishermen, is embodied in the symbol of Cape Ann as an island of refuge that the nation turned its back on as it moved inland in its tainted “progress.”