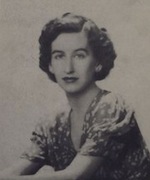 OGILVIE, ELISABETH [MAY] (1917-2006). Born in Roxbury, Massachusetts, and soon thereafter uprooted to Maine, Elisabeth Ogilvie gained critical and popular attention for her first novel, High Tide at Noon (1944). The novel and its sequels, Storm Tide (1945) and The Ebbing Tide (1947), centered on the Bennetts, a family presiding over a small island off the coast of Maine. During the next four decades, in penning a prolific stream of low key romantic novels, mysteries, and juvenile fiction, Ogilvie became known for her lyrical, pleasant descriptions of Maine’s islands and coastal fishing villages.

While primarily a storyteller in the tradition of domestic women’s fiction, Ogilvie’s novels emanate with the distinct flavor of daily life along the Maine coast and its environs. Fishing lore and the minutiae of coastal life provide the lifeblood for most of her forty books, which include such appealing titles as Becky’s Island (1961), Waters on a Starry Night (1968), The Dreaming Swimmer (1976), the autobiographical My World Is an Island (1954), and The Summer of the Osprey (1987). Ogilvie’s Jennie Glenroy series relates the adventures of the daughter of a nineteenth-century shipbuilder. Her juvenile fiction includes Come Aboard and Bring Your Dory (1969).

Ogilvie currently lives in the Maine of her fiction, where she writes, fishes, wanders the coastline, and paints boats.