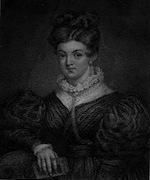 MORRELL, ABBY JANE [WOOD] (1809-l???). The cousin and second wife of Captain Benjamin Morrell, Abby Jane Wood married the captain when she was fifteen. She accompanied him on the last of his four voyages of commerce and exploration, in the schooner Antarctic (1829-1831). Apparently emulating his account of his ventures in his 1832 Narrative of Four Voyages. . . . , Abby Jane Morrell “wrote” her own Narrative of a Voyage to the Ethiopic and South Atlantic Ocean, Indian Ocean, Chinese Sea, North and South Pacific Oceans, in the Years 1829, 1830, 1831 (1833). Actually, though, according to an introductory “Advertisement,” her narrative was written and printed before her husband’s, but its publication was delayed. The publishing house of Harper touts its ostensible author as an educated woman whose book will be read with pleasure, especially by her countrywomen. But according to Eugene Exman’s The Brothers Harper (1965), like her husband’s book, hers was ghostwritten, apparently from her notes, by Samuel L. Knapp, author of Lectures on American Literature (1829).

Whether describing places visited, calling for missionaries to spread Christianity and civilization, declaring its ostensible author a friend of the mariner because she wants to reform him, announcing a belief in what seems racial equality (but declaring that “savages” should learn English because their own languages are too simplistic), or declaring that the Euro-American discoverers of places hitherto unknown to their world should, as a matter of common sense, possess them, Mrs. Morrell’s book is a series of self-serving cliches. Its lack of organization compounds the weakness–conchology and reform of seamen, for example, making up one chapter. Because of its mixed authorship, Mrs. Morrell’s Narrative resists comparison to other sea-related writings by nineteenth-century American women.

This entry was posted in M and tagged 19th Century, Antarctic, Exploration. Bookmark the permalink.