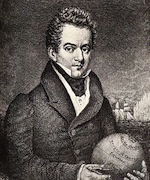 MORRELL, BENJAMIN (1795-1839). Benjamin Morrell, sealing captain and explorer, was born in Rye, New York, the son of a shipbuilder. His early experiences included being twice captured by the British during the War of 1812 and spending over two and a half years in prison. Subsequently, he made a number of deep-sea voyages as a sailor on commercial vessels, mostly to the Pacific.

Morrell’s only claim to authorship is A Narrative of Four Voyages to the South Sea, North and South Pacific Ocean, Chinese Sea, Ethiopic and Southern Atlantic Ocean, Indian and Antarctic Ocean. From the Year 1822 to 1831 (1832). It narrates his adventures on his first command, the sealing schooner Wasp (1822-1824), and three more voyages, also in schooners. His second wife, his cousin Abby Jane (Wood) Morrell, accompanied him on the last of these and put her name to a separate account of it (1833). Morrell apparently died of a fever in Mozambique.

Despite Morrell’s uneven interpretations of the South Pacific islanders whom he encountered and his sometimes bloody behavior there, his accounts do remain important. More significantly, his assertions of Antarctic discovery, if true, would make him notable in far-southern exploration. His book is also remembered as one source for details in Edgar Allan Poe’s The Narrative of Arthur Gordon Pym (1838).

Morrell’s Antarctic claims have been challenged and in some cases proved wrong. His work does evidence an overactive imagination, and one critic even called him “the Baron Munchausen of the Pacific.” Morrell’s too-frequent errors in position are probably due to carelessness, the lack of a chronometer and therefore having to rely solely on a magnetic compass, and inability (because of weather) to take frequent sun sights. His melodramatic, cliched, and self-justifying style similarly supports incredulity, but those qualities may be mostly the product of his ghostwriter, Samuel Woodworth, author of the hugely popular poem “The Oaken Bucket” (1818), whose authorship was not revealed until 1965 by Eugene Exman in The Brothers Harper.

Narrative of Four Voyages to the South Seas (1832)