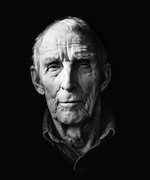 MATTHIESSEN, PETER (1927-2014). New York-born Peter Matthiessen has borne the double titles of author and naturalist since the beginning of his professional writing career. Son of an architect father who was also a trustee of the National Audubon Society, Matthiessen has continually demonstrated a deep respect for, and knowledge of, the natural world, which permeates his writing. Having served in the navy 1945-1947, he began writing short stories at Yale University while enrolled in courses in zoology and ornithology. His junior year, 1948-1949, was taken at the Sorbonne, University of Paris. In 1950 he received both his B.A. from Yale and the distinguished Atlantic Prize for Best First Story (“Sadie”).

In 1951 Matthiessen cofounded the Paris Review with Harold L. Humes, and during 1954-1956 he captained a deep-sea charter fishing boat out of Montauk, Long Island, New York. He has been a commercial fisherman and a member of expeditions to wild areas of all five continents, keeping a record of his observations of the natural world in both his fiction and nonfiction. His first nonfiction volume, the encyclopedic Wildlife in America (1959), was written after a three-year journey to every then-existing North American wildlife refuge and is in the permanent collection of the White House Library. He was a National Book Awards judge in 1970; he received both the National Book Award for Contemporary Thought and the American Book Award for The Snow Leopard (1978). In 1985 he was awarded a gold medal for Distinction in Natural History from the Academy of Natural Sciences. He is a member of the New York Zoological Society and from 1965 to 1978 served as a trustee.

The volumes of Matthiessen’s work that depict the marine world are many and encompass diverse locales and themes; a recurring concern is the tension created between the natural world and capitalist forces. Oomingmak: The Expedition to the Musk Ox Island in the Bering Sea (1967) chronicles Matthiessen’s experiences in a 1964 trip underwritten by the University of Alaska and the Institute of Northern Agricultural Research, whose purpose was the capture of musk ox calves for transfer to Fairbanks, where they would become the source of a permanent North American herd. In the same year he produced the reference The Shorebirds of North America with Ralph S. Palmer and artist Robert Verity Clem. In 1970 Matthiessen undertook another of his numerous “remote” journeys, this time as a diver in Australia, accompanying a team attempting to capture the first footage of the great white shark. He chronicled this period in Blue Meridian: The Search for the Great White Shark (1971). The film was eventually released under the title Blue Water, White Death (1970). He is also the author of a children’s book, Seal Pool (1972), illustrated by William Pene Du Bois and published in England as The Great Auk Escape.

Far Tortuga (1975) remains Matthiessen’s most extensive fictional treatment of the sea and has enjoyed lasting critical acclaim for its singular narrative technique as well as its carefully researched and documented setting. The characters illustrate one of Matthiessen’s ongoing concerns: the vanishing breed of “hands-on” fishers, slowly pushed into uselessness by human greed, monolithic corporations, and increasingly mechanized fishing procedures. More recently, Matthiessen has returned to nonfiction chronicles about the sea and its inhabitants, human and otherwise. His own experience as a commercial fisherman and boat captain informs his study of the vanishing community of eastern Long Island fishermen, Men’s Lives: The Surfmen and Baymen of the South Fork (1986), adapted into a play, Men’s Lives, by Joe Pintauro (first perf. 1992; pub. 1994). His murder-mystery trilogy about Edgar J. Watson, pioneer of the Florida Everglades (Killing Mr. Watson [1990], Lost Man’s River [1998], and Bone by Bone [1999]), is set in the Ten Thousand Islands region off the coast of southwest Florida. The lushly photographed Baikal: Sacred Sea of Siberia (1992) contains his diary of a twelve-day journey along the 400-mile lake that holds one-fifth of the world’s fresh water and includes a study of the region’s fishing population, wildlife, and encroaching pollution. Matthiessen continues to travel and explore widely, and his work appears in numerous popular publications including Audubon, The New Yorker, and Outside. by Eric G. Waggoner (2000)