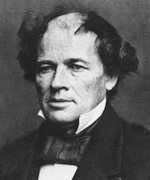 MAURY, MATTHEW FONTAINE (1806-1873). The 1855 publication of Matthew Fontaine Maury’s Physical Geography of the Sea inaugurated the distinct discipline of oceanography, but earlier essays under the pseudonym “Harry Bluff” helped shape reform of the antebellum U.S. Navy. Born in Fredericksburg, Virginia, Maury pursued a career as an officer in the U.S. Navy that led to his appointment as superintendent of the National Observatory in Washington, D.C. Maury’s greatest contribution to literature was an oblique one: his research leading to the 1851 publication of his Whale Chart and Explanations and Sailing Directions to Accompany the Wind and Current Charts inspired Herman Melville’s chapter “The Chart” in Moby- Dick (1851).

On the eve of the Civil War, Maury resigned from the U.S. Navy to enter the service of the Confederacy, first as a naval officer and later as a diplomat. In 1868 he returned to the United States to teach at the Virginia Military Institute, where he remained for the rest of his life. Charles Lee Lewis has written Matthew Fontaine Maury: The Pathfinder of the Seas (1927).

This entry was posted in M and tagged 19th Century, Navy/Coast Guard, Nonfiction. Bookmark the permalink.